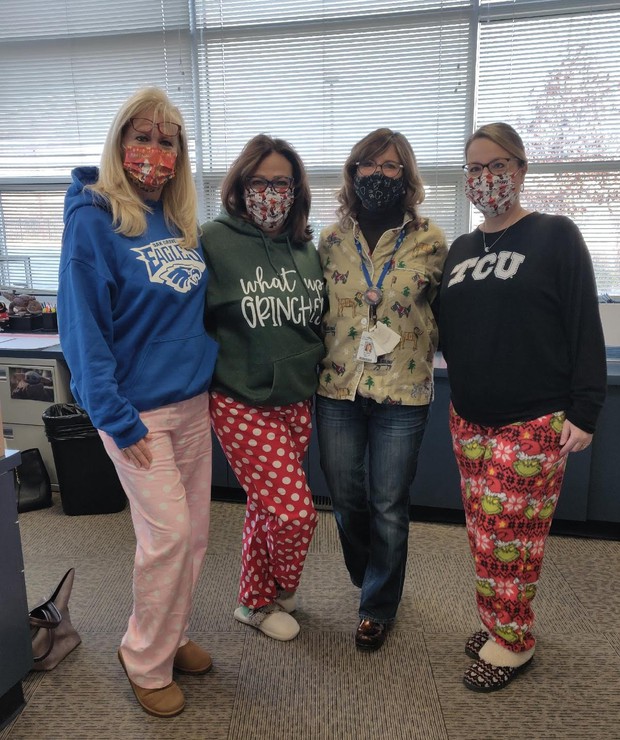 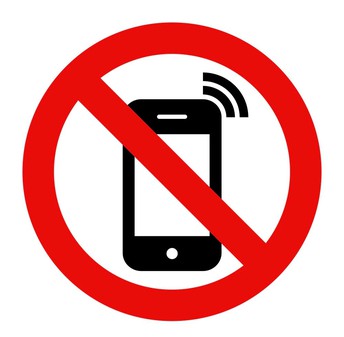 Google Meets and Cell Phone Use

While we are remote, please remind your child(ren) that they should refrain from using their cell phones during class time. Even though we are not in the physical classroom, we would still like our virtual environment to be free from distractions. Thank you for your support! 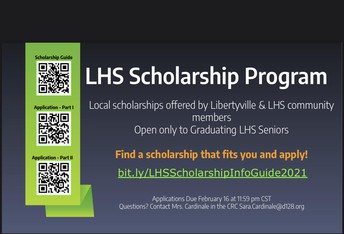 Calling all LHS seniors! Are you an OGS alum? Be sure to apply for the OGEA Eagle Scholarship!

The Oak Grove Education Association is proud to offer the sixth annual Eagle Scholarship which is given to an Oak Grove alum who has demonstrated excellence in academics, character, extracurricular activities, and service. The OGEA represents the certified staff at Oak Grove School. Our educators are committed to the success of all current and former students.

Applications are due February 16. 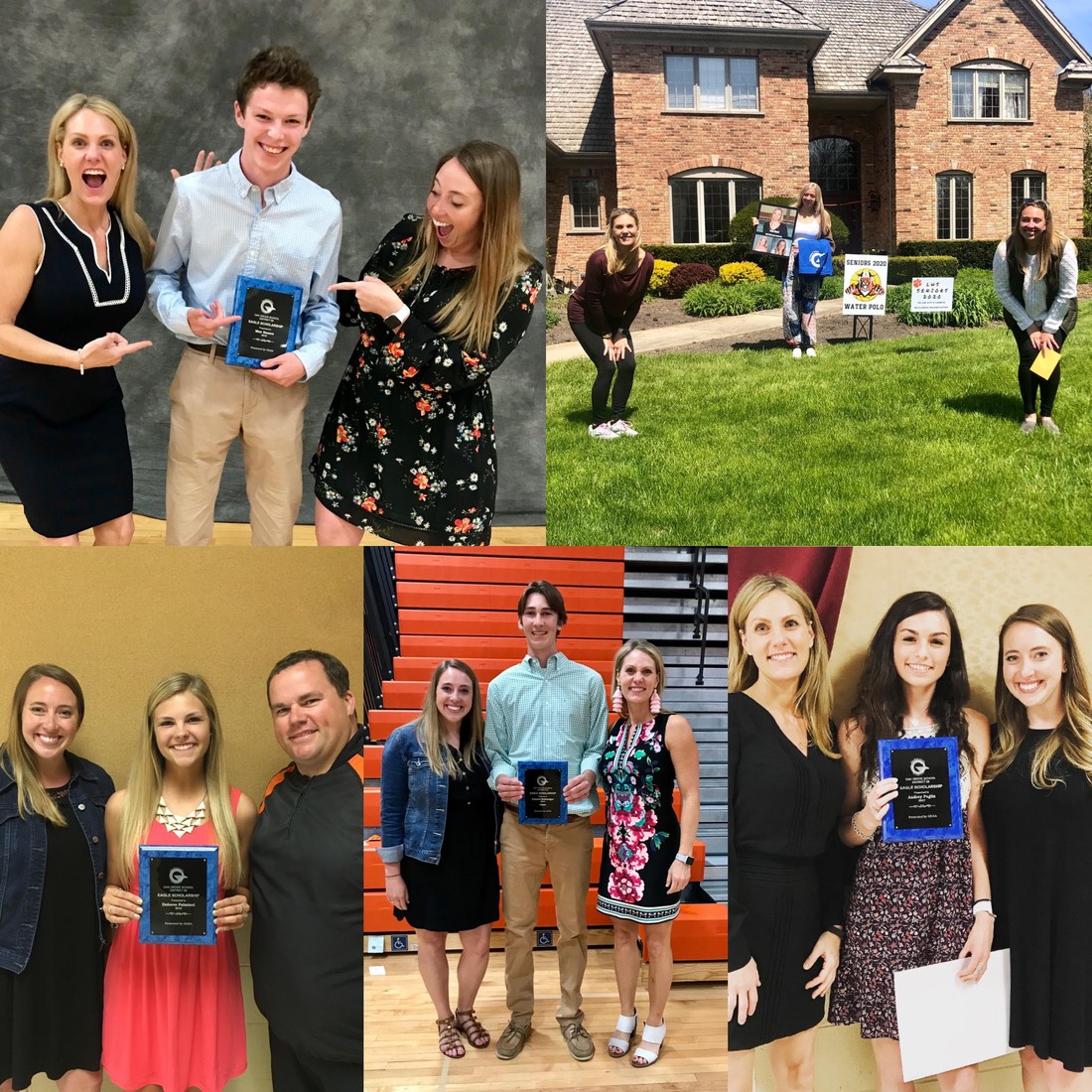 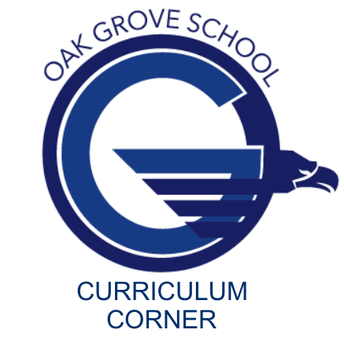 Currently, the U.S. Secretary of Education has decided not to grant waivers for the administration of spring 2021 assessments. Assessments shine a light on how this pandemic has impacted our students and what we need to do to help them recover. We may not be able to compare this year’s data to other years’ due to these unique circumstances, but assessments do give us a valid and reliable snapshot of this moment in time. They are a critical diagnostic tool and an essential component of our efforts to support students’ recovery from the pandemic. Whether an Illinois district is currently serving students in-person, remotely, or in a hybrid environment, all state assessments must be completed within the school building for the 2020-2021 school year.

In order to administer these assessments to all Oak Grove students in person, ISBE states we must ensure the following guidelines are met:

Illinois State assessments that are part of the required in-person administration for Oak Grove students:

Between now and the assessment windows, the Oak Grove administration is actively working to craft a plan to support all of our Oak Grove students with a scheduled time to come in the building for these required assessments, while still maintaining our high priority of safety and mitigation strategies. More detailed information will be shared in the coming weeks.

Last week, we shared the updated spelling bee qualifying round process through an email home to 4th-8th grade families and an announcement in the Oak Grove News. We also conducted our qualifying rounds for 5th and 6th grades. This week, it's time for 4th, 7th, and 8th grade spellers to qualify for the bee! Interested in trying the qualifying rounds? Please take a look at the dates below. You will need to be able to attend and participate in your grade's round, so make sure to mark you calendars!

Rules will be read promptly at the start time, so make sure to be on time.

As these are grade level events, if a student is unable to attend their date, they won't be able to make up the test. Also, keep in mind that our school-wide bee will take place on Wednesday, January 13 at 6:00 PM. If you know that you won’t be able to participate in that bee if you make it to that round, please sit out the qualifying round so other students who will be available on that date have a chance.

Those interested should join the Google Meet at their date and time using the meet code: spellingbee. 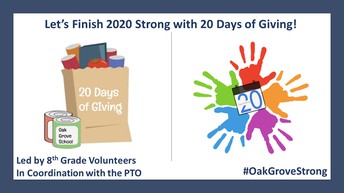 Do you have a recipe you would love to share with the OGS community? Please share one (or more) of your family’s favorite recipes and we will add it to the first ever digital OGS Recipe Book! Use this LINK to submit your recipe. We will collect recipes through the end of January, so test some recipes during winter break! If you have any questions, please contact Laura Reutzel at sandersL7@hotmail.com or pto@ogschool.org.

We look forward to seeing all of your fabulous recipes!

We are now looking to fill the 2021/22 PTO Executive Board. Think you’d be a strong addition to our leadership team? Volunteering with the PTO is a great way to meet other parents and give back to our school!

If you have any interest, please complete this form and we will contact you to share more details and answer any questions.

Due to building renovations at Clucker’s, this week’s dinner has been moved to Wednesday night (12/16). The order window has been extended until Tuesday at 9am. If you placed an order but have a conflict with Wednesday contact Marla’s at marlaslunchinfo@gmail.com.

The middle school experience can include a wide range of emotions. It is easy to misread these emotions and it is beneficial to properly identify them early. Specifically, depression appears to be occurring at a much earlier age and the past decade has seen teen suicide rates double.

To proactively address this issue, Oak Grove School is partnering for a second year with Elyssa’s Mission to offer depression and suicide prevention training to our 7th and 8th-grade students. The screening and training will take place on January 12th for 7th grade and January 19th for 8th grade. Elyssa’s Mission is an evidence-based suicide prevention program that has been shown to address suicide risk and depression while reducing suicide attempts.

Through the program, students learn:

● Depression is treatable, so they are encouraged to seek help.

● How to identify depression and potential suicide risk in themselves or a friend.

● Who students can turn to at school for help, if they need it.

Students will watch age-appropriate video clips about depression, suicide, and what to do if they are concerned about a friend. Following the video, students will complete a response slip which asks whether they would like to talk to an adult about any concerns. School staff will conduct brief meetings with any student asking to talk.

We encourage you to visit www.sossignsofsuicide.org/parent for information on warning signs for youth suicide, useful resources, and some of the key messages students will learn. In addition, here is an infographic for you to reinforce the ACT message at home and Oak Grove crisis resources.

If you do not wish your child(ren) to participate in the depression and suicide intervention training, please contact the Ryan Murray at 847-367-4120 ext. 2708 or murray@ogschool.org.

If we do not hear from you, we will assume your child has permission to participate in this program. Thank you for your support with this program.

As we enter winter break, we wanted to take a moment and wish all of our families a safe and enjoyable time away from school. We know that each and every family has their own way to celebrate and/or continue family traditions.

With that in mind, we wanted to add context for some of the celebrations that may take place within our community and make more connections with each other. We hope that your family has an opportunity to celebrate and experience the break that best supports you! If you have any pictures of your family celebrations and/or traditions please share them on our social media platforms. Thank you all and we look forward to 2021!

The eight-day Jewish celebration known as Hanukkah or Chanukah commemorates the rededication during the second century B.C. of the Second Temple in Jerusalem, where according to legend Jews had risen up against their Greek-Syrian oppressors in the Maccabean Revolt. Hanukkah, which means “dedication” in Hebrew, begins on the 25th of Kislev on the Hebrew calendar and usually falls in November or December. Often called the Festival of Lights, the holiday is celebrated with the lighting of the menorah, traditional foods, games and gifts.

Omisoka is a very important holiday for people from Japan, and is celebrated at the same time as New Year’s in North America. In preparation for a new year and a clean slate people purify their homes and remove last year’s clutter by cleaning from top to bottom. This is called “osoji.” They have a giant feast with friends and family with some traditional Japanese foods. It is also considered a spiritual event for many and at midnight they visit Shinto shrines and temples ring bells at midnight.

Christmas is celebrated on December 25 and is both a sacred religious holiday and a worldwide cultural and commercial phenomenon. Popular customs include exchanging gifts, decorating Christmas trees, attending church, sharing meals with family and friends and, of course, waiting for Santa Claus to arrive.

The name Kwanzaa is derived from the phrase “matunda ya kwanza” which means “first fruits” in Swahili.

Each family celebrates Kwanzaa in its own way, but celebrations often include songs and dances, African drums, storytelling, poetry reading, and a large traditional meal. On each of the nights, the family gathers and a child lights one of the candles on the Kinara (candleholder), then one of the seven principles is discussed. The principles, called the Nguzo Saba are values of African culture which contribute to building and reinforcing community among African-Americans.

St. Lucia’s Day, festival of lights celebrated in Sweden, Norway, and the Swedish-speaking areas of Finland on December 13 in honor of St. Lucia (St. Lucy). The festival marks the beginning of the Christmas season in Scandinavia, and it is meant to bring hope and light during the darkest time of the year. Families observe St. Lucia’s Day in their homes by having one of their daughters (traditionally the eldest) dress in white and serve coffee and baked goods, such as saffron bread (lussekatter) and ginger biscuits.

The middle of winter has long been a time of celebration around the world. Early Europeans celebrated light and birth in the darkest days of winter. Many peoples rejoiced during the winter solstice, when the worst of the winter was behind them and they could look forward to longer days and extended hours of sunlight. In Scandinavia, the Norse celebrate Yule from December 21 through January. 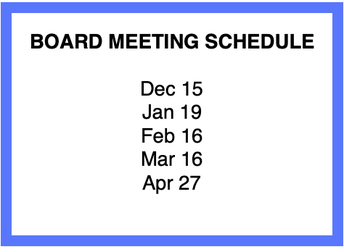