Make a reading resolution in 2017!

Your child's goal: Read as many books as possible between now and January 12th. Reading logs MUST be turned in to Ms. Knight no later than Thursday, January 19th. We’ll have prizes for those who read the most in each grade level, and every participant will receive recognition!

Students have received reading logs, but you can also print out a reading log here. List books as you complete them. Remember that books can be counted only once, and only books finished should be recorded. 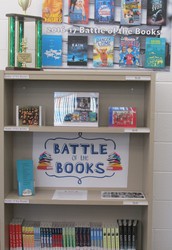 **This practice is dependent on the team making it to Finals.

Click here for a handy checkoff sheet to keep track of your Book Award reading.