A competition for technological dominance

A competition for technological dominance

On October 4, 1957, the world's first artificial satellite, the Sputnik, was launched into orbit by the Soviets. Americans were surprised and worried. If the Soviets could launch a satellite into orbit, could they deliver a nuclear warhead into U.S. airspace? The U.S. had to catch up to and surpass the Soviets in the realm of space exploration. 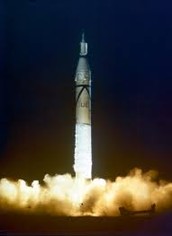 The U.S. Starts the Space Race

In 1958, the U.S. launched it's own satellite, Explorer I, designed by the U.S. army and under the direction of rocket scientist Wernher von Braun. President Dwight Eisenhower signed a public order creating NASA, or the National Astronautics and Space Administration, that same year. He also launched other space programs, one which was dedicated to exploring the military potential of space, and one that would use orbiting satellites to gather intelligence on the Soviet Union and its allies.

Events of the Space Race

In 1959, Soveits launched the Luna 2, the first space probe to hit the moon. In 1961, Yuri Garagin became the first person to orbit Earth, traveling in the Vostok 1. To send a man into space, the U.S. created a smaller, lighter capsule than the Vostock. They tested it on chimpanzees before launching it into space on May 5, 1961 with Alan Shepard becoming the first American in space. Later that month, President Kennedy claimed that the U.S. would land a man on the moon before the end of that decade.

Nasa's first lunar-landing mission was dubbed Project Apollo. During a launch simulation in January 1967, three astronauts were killed when their spacecraft caught fire. December 1968 brought the first launch of Apollo 8, the first manned vessel to orbit the moon. Finally, on July 16, 1969, the Apollo 11 space mission, with astronauts Neil Armstrong, Edwin "Buzz" Aldrin, and Michael Collins, was set off, the first lunar landing attempt. They landed successfully on July 20th, and Neil Armstrong became the first man to walk on the moon.

Why it was important

The Space Race was important because it was a competition between the U.S. and the U.S.S.R. to find out who was the most technologically advanced country. It meant that whoever could be the first to walk on the moon was the stronger country and could beat the other in the Cold War. For the U.S., It was a matter of National Pride.

The Space Race and the Cold War

The Space Race was just part of the Cold War, but it parallels it because of how they both had one main purpose for the U.S., to beat the Soviets. Both were a race between the U.S. and the U.S.S.R. to be the more technologically advanced country and be more powerful than it's competitor.

Follow Katie Hayes
Contact Katie Hayes
Embed code is for website/blog and not email. To embed your newsletter in a Mass Notification System, click HERE to see how or reach out to support@smore.com