Nothing Will tear them Apart

Nothing Will tear them Apart

Having a friend can be the difference between life and death. In the book, The Lions of Little Rock by Kristin Levine, two girls form a close friendship during a challenging time. The story takes place in Little Rock, Arkansas in 1958 during the time of segregation. The key characters in this book are Marlee, Liz, Sally, Judy and Red.

The clash between these characters leads to an angry and threatening environment. Marlee, the main character, is a shy 12 year old. She is white but an integrationist and believes that the schools should be integrated. Marlee has one big problem which is that she doesn’t talk much outside of her family. Liz is a black girl who befriends Marlee and helps her overcome her fear of talking. Sally is a mean girl, thinks she is the best and ignores Marlee at the beginning. Red is a cruel young man and a strong believer in segregation. Marlee and Liz develop a close friendship but the segregation in town and the segregationists put them both in danger.

The friendship and ultimately the lives of Marlee and Liz are put in danger until the town votes against segregation. The climax of the story is when Liz gets kicked out of school for pretending to be white. The principal finds out that Liz is a Negro and demands to have her expelled. Marlee is devastated when she hears that Liz isn’t coming back to school and wonders why. The resolution of the book is when the schools become integrated. Finally Liz and Marlee can be together without worrying about their lives being in danger.

Red, mean, dangerous. Those are the only words that come to mind when I hear that name. Throughout the whole story Red shows these characteristics. Red is a fierce believer in segregation and doesn’t like it when Marlee hangs out with Liz, a negro. They don’t listen to him and in return he threatens to kill them by throwing dynamite into the house they are in. Their reaction to this attack, on page 260, shows the danger of red, “ We all froze. There was a crash and a sound of breaking glass. A screech of wheels, driving. And then, an explosion.”

The Lions of Little Rock takes place in 1958, a time of segregation. Marlee has had a tough time between her brother off at college and her sister out of the room they have shared forever. On top of that she finally makes a friend at school but they find out she is a black passing as a white and because of the segregation rules expel her from the school. Marlee was devastated when she heard the news but even though it was dangerous they still kept hanging out after school and on weekends. This is a quote on page 62 about the time Marlee hears the news, Marlee, I’m afraid I have to tell you that Elizabeth will not be returning to West Side Junior High.”

When Julian, Sally and Nora heard it they couldn’t believe there was a black at their school and were grossed out. This quote shows how badly whites thought of blacks at this time period, “Last week I even loaned her my hairbrush, whispered Sally. Ewww, squealed Nora. I know, Sally said. Of Course I already threw it away. Can you believe it? JT said. A nigger at our school? I stood up suddenly furious, but I wasn’t sure at whom. JT, Miss Taylor, Sally, Liz, myself?”

The segregation in town started becoming very dangerous for Liz and Marlee to see each other between the Ku Klux Klan and Red. Red was furious that Marlee and Liz were still hanging out and that LIz was coming over to the white part of town. Red decided to throw dynamite into Liz’s house not knowing Marlee was their and that it wasn’t her house.

The Ku Klux Klan sent a very threatening letter to Liz that saying that if she walks alone to school today she will not come back. This shows that the book takes place at a very dangerous time when segregationist were killing people. The Ku Klux Klan were a strong group of segregationist and didn't like when white girls spent time with black girls. They would even threaten to kill them.

of Soviet invasion of

Red throws dynamite at the house Marlee and Liz were in thinking it was Liz’s house and not knowing Marlee was in it. Fortunately Marlee recognizes the car and tells everyone to get out of the house before he throws the dynamite 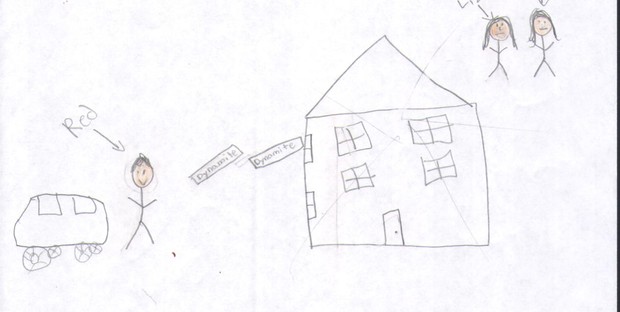 Liz gets kicked out of West Side Junior High because passed as a white when she was really a black. Sally and her mother saw her walking in the black part of town holding hands with a Negro. They immediately told the Principal and demanded for her to get expelled.