When the character first appears

Tybalt appears in the first scene of the play and fights the Montagues.

His first lines are:

"What, art thou drawn among these heartless hinds?

It is already clear that Tybalt is heavily driven by the need to fight for his family. In his second line he challenges Benvolio to a fight. His motivation is to provoke conflict. 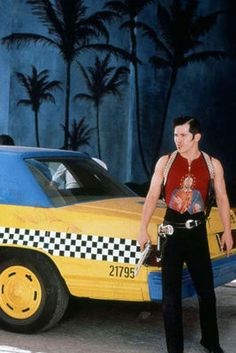 The clothes and accessories that Tybalt wears are embellished with Cs or the Capulet name. Tybalt takes pride in his family and shows it through the clothes that he wears.

The picture above is taken from Baz Luhrmann's film of 'Romeo and Juliet'. In the film Tybalt is cat-like, sly and vain. When Tybalt enters the room there should be a change in the attitude of other characters. He should make other characters feel nervous and to some extent, fearful. In the photo above Tybalt stands confidently. This is how he should be in the play.

Tybalt is hot-headed and lead by the motivation to fight for the Capulets. When Romeo arrives at the Capulet Ball he says to Lord Capulet "This, by his voice, should be a Montague… Now,by the stock and honour of my kin, To strike him dead I hold it not a sin." Act I, Scene V, Lines 54-59. Tybalt immediately wants to punish Romeo for coming to the ball uninvited, but Lord Capulet tells Tybalt to relax and ignore him. If Tybalt thinks that his pride has been injured, he is quick to stand up and defend himself. 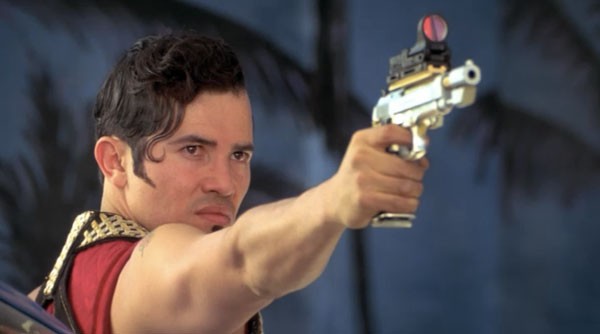 Tybalt is a rash, hot-headed character. These qualities effect what he says. Every word that Tybalt speaks is made to threaten or insult the Montagues. His speech reflects his thoughts. When he sees Romeo at the Capulet Ball he says "A villain, that is hither come in spite To scorn at our solemnity this night." Act I, Scene V, Lines 62-63. The next day he says to Romeo, "Romeo, the love I bear thee can afford No better term than this: thou art a villain". Act III, Scene I, Lines 59-60. Tybalt speaks without thinking of the best way to handle the situation. He is prepared to fight Romeo at the Capulet Ball. He does not worry about the time or place. Tybalt also does not think of the location when challenging Romeo to a fight on the streets of Verona.

Tybalt is constantly thinking of the feud between the Montagues and Capulets. He has been blinded by the feud that he has grown up with. The way he thinks, talks, acts and looks are all influenced by the rivalry between the Montagues and Capulets. In the photo above Tybalt looks confident and bold. He is defensive of his family and loathes the Montagues. He is also a very loyal person. He is loyal to his family and fights for them at any chance.

The relationships he has with other characters

Tybalt can be seen as the leader of the young Capulets. Before he fights Mercutio, he says to his friends "Follow me close, for I will speak to them." Act III, Scene I, Line 36. When speaking to the Montagues, Tybalt is almost always the one speaking and is well known amongst the Montagues. He is confident and sure of himself.

Mercutio and Tybalt have a strong relationship. They share a similar motivation, to defend what they care about. Tybalt wants to fight for his family, while Mercutio wants to defend his friends. Tybalt and Mercutio are also aggressive and easily angered. They are enemies and despise each other. It is these similar characteristics that drive them both to their death. When Tybalt challenges Romeo to a fight and he declines, Mercutio cannot help but fight for his friend.

How he changes throughout the play

Throughout the entire play Tybalt is guided by the families' feud. Before he dies he says "Thou, wretched boy, that didst consort him here, Shalt with him hence." Act III, SceneI, Lines 130-131. Even in his last words he is threatening to kill a Montague. After murdering Mercutio he is still willing to kill Romeo. His yearning to defend his family leads to his death. When Tybalt quickly stabs Mercutio under Romeo's arm it is clear that Tybalt has been completely blinded by the feud.

Tybalt contributes to the death of Romeo and Juliet. When Tybalt challenges Romeo to a fight Romeo declines, trying to reason with Tybalt. However Tybalt does not take no for an answer and does not listen to Romeo. If Romeo had not killed Tybalt, he would not have been banished and may not have ended up dead, alongside Juliet.