Over the years, Sydney has grown and developed into an industrious city that houses the largest population in Australia.

But with this glorious beauty of our city comes the bad that resulted from the building processes.

Sydney has many aspects that all contribute to staining Sydney's beauty.

Air pollution is caused by:

- the many vehicles which Sydneysiders use to commute back and forth from school, work, etc.

- the industry and factories that work to build and construct new things for Sydneysiders to utilise.

There are many pollutants that contribute to this issue.

Some of these are: 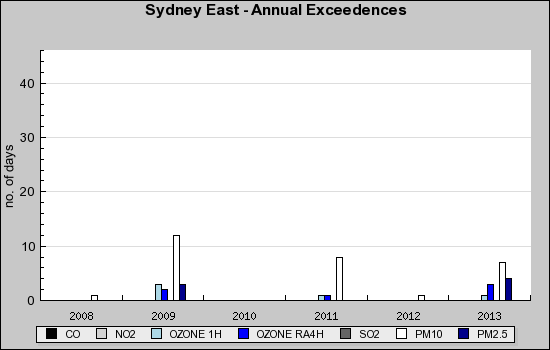 As shown by the graphs, it shows that overall, some exceedences have decreased where others have increased.

As shown in the 'Central Tablelands' graph, the exceedences have dropped significantly. This is due to the rural environment of this are and the low number of industry and vehicles.

However, the number has increased in metropolitan areas like 'Sydney North-West' where there are a higher number of vehicles and industry.