Jeni is using Smore newsletters to spread the word online.

Get email updates from Jeni:

Remote Learning Week 5...Its May!! 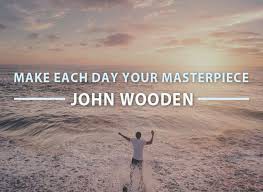 Our Vision and Mission

We exist to empower our community.

At Llano High School we will collaborate to engage hearts and minds which will energize action and lifelong learning that we will execute with discipline.

Faculty Zoom at 11am

Thanks for taking a look!

Please come back and take a look at our newsletter. It will be done weekly and will have all kinds of information about things going on at Llano High School and Llano ISD. If you ever want anything to be on here please contact Coach Lange @ tlange@llanolisd.org. We hope you have a great year! 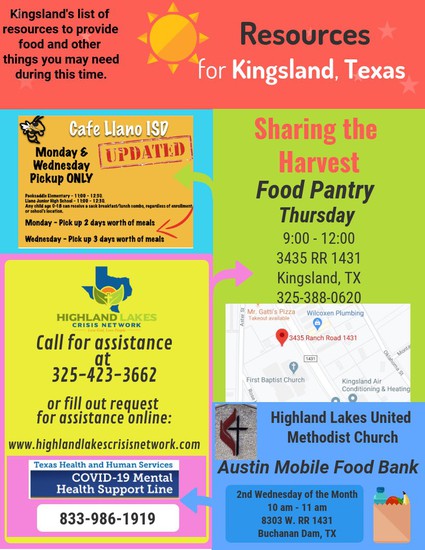 Governor Abbott cancelled school for the remainder of the school year..

In today's press conference, Governor Abbott cancelled school for the remainder of the school year. We will receive additional information from TEA Commissioner Morath for steps moving forward. As I have information, I will continue to keep you posted. In the meantime, stay safe.

U.S. News Unveils 2020 Best High Schools Rankings - Llano is one of them!

I am so proud of our students and staff of Llano High School for once again being named to U.S News and World Report’s Best High Schools List! 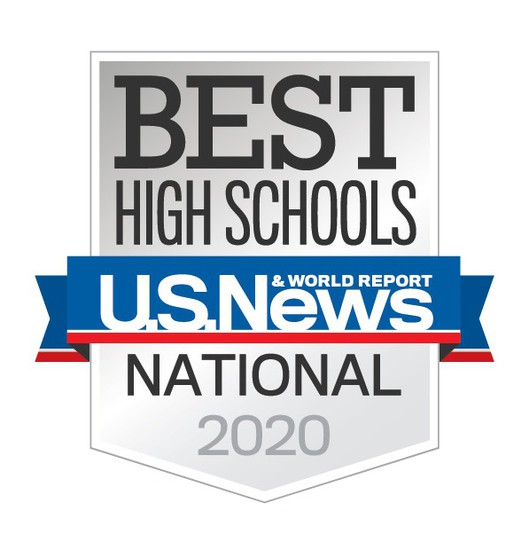 We will communicate and include you in our discussions on future graduation plans. Your legacy at LHS will live thrive for years to come. This is just the beginning for you.

Congrats to this guy - Luis Salas. He was an amazing manager for the Jacket and Lady Jacket Program. He wasn’t mine for hoops because the boys got to him first but he was so good I was jealous! I nominated him and he earned the honor of TABC 2019-2020 Student Asst. of the Year 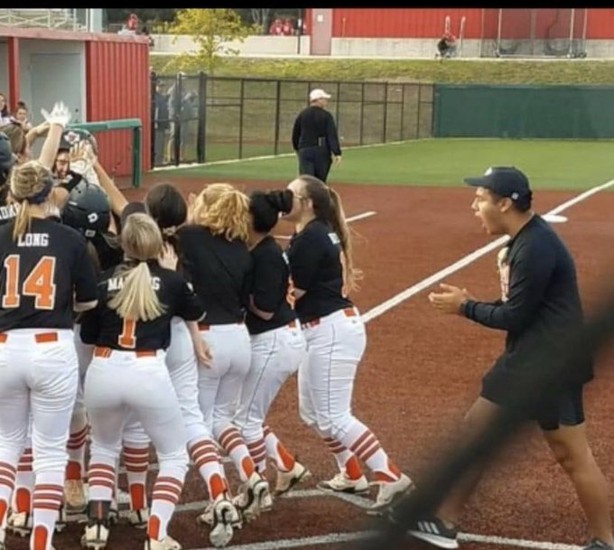 Committed to play football for SAGU! 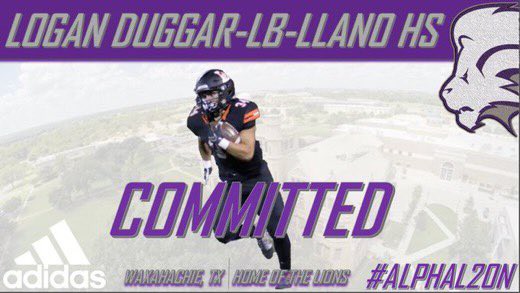 Llano High School wants to honor our seniors of 2020!

Check out Twitter @HighLlano and you will see the Seniors being honored...

Luke Snitkin for being chosen to participate in the FIRST EVER MLR Draft 2020 (Major League Rugby).

Shout to a 2016 Llano graduate, Luke Snitkin for being chosen to participate in the FIRST EVER MLR Draft 2020 (Major League Rugby). Luke was an All American Rugby player for ASU & a two time National Small College Rugby Organization player. He is 1 amazing young man! Go get em! 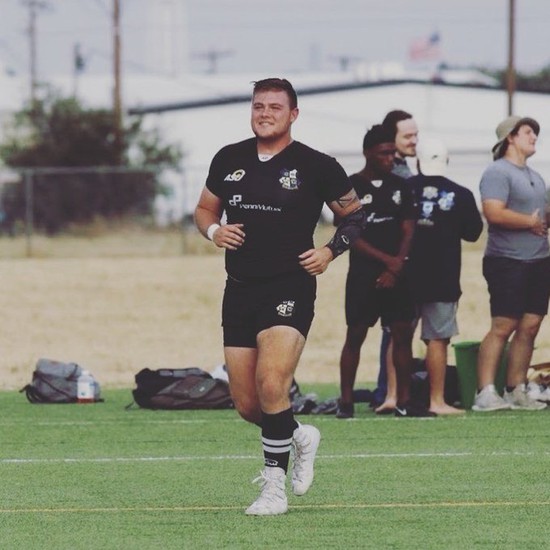 Today I am sitting up straighter in my chair, determined to reach out to as many community members as possible to support each of you with the emotional support we all did during this unique, scary, strange, dare I say fun and reflective time? I have heard every adjective available to describe this pandemic.

Now is the time to communicate with more intention and more often.

A favorite Mister Rogers’ quote, “Anything that's human is mentionable, and anything that is mentionable can be more manageable. When we can talk about our feelings, they become less overwhelming, less upsetting and less scary.”

I have watched “Won’t You Be My Neighbor?” a documentary about Fred Rogers and “A Beautiful Day in the Neighborhood’. This is new movie out about Fred Rogers starring Tom Hanks recently. I had no idea how impactful Mr. Roger’s unconditional regard would be in my pursuit to be a mindful therapist. I have failed many times and was glad to hear that Mr. Rogers had to practice being present, kind, empathic, and responsive. The shows gave me hope for the future and beautiful memories of my childhood.

Mindfulness is not really fancy. In communication it is be completely present when someone is talking to you. Active listening. If you are cutting up vegetables stop and look your child in the eye, if you are traveling, turn off the electronics and ask some connection questions. Here are a few to get you started:

What do you think the best invention will be in fifty years?

What is the best part of summer for you?

Let’s start a new hobby together. What ideas do you have?

What is the scariest thing that has ever happened to you?

A challenge for active listening is to listen without minimizing or “fixing” the idea or feeling. Sit with it. Be with the other person. Empathy when sad or scary feelings is the best response to have.

A great 3 minute explanation of Empathy. Please watch and share if you are so moved!

Please email me if you have any questions or looking for mental health resources.

Today I am going to describe a simple but very effective calming activity. You may have heard of being mindful or grounding yourself to help your body stop reacting with a fast heartbeat, sweaty palms, or even an upset stomach when you are nervous about something. It is important to practice these types of activities consistently so when we need help calming down we know exactly what to do. This activity is great for people of all ages.

Five senses mindfulness uses: See, Hear, Touch, Smell, and Taste. The tool we use to remind us is something we have with us all of the time. Our hand!

A good activity is to print, cutout, and color the hand provided. Now label each finger with the five senses. This five minute calming activity goes like this:

Turn off the television, radio, any distracting noise. Sit down and put your feet solidly on the ground. Settle in. Take a deep breath. Close your eyes. Take two more deep, slow breaths. Open your eyes.

Look around and name out loud 5 things you can see. Take your time. Take a breath.

Now name 4 things you can hear. Listen very closely. What is something you hear in the distance? Take a deep breath.

What are 3 things you can feel? Think about this. Can you feel the wind on your face, or the sun on your skin? What about the sleeves on your arms? Your skin is very sensitive to even the slightest touch such as an ant crawling over your foot. Take a breath again.

What is something you can taste or would like to taste right this minute? Did you just have a sweet treat? What about a minty piece of gum? Now take two very slow cleansing breaths.

Families I hope you to do this activity and hang up the hands where you can see them every day. I encourage you to do this mindful exercise together one time per day for the next week. Let me know if it helps you feel better!

Llano High School Band Member Joins a Virtual Band. Jackson Turner, who is a 1st chair trombone player in the Llano High School Symphonic Band, has not let the ongoing school closure keep him from playing in a band. Jackson found an opportunity to keep playing his trombone in a “virtual” band. Below are some questions he was asked about the band and his experience in becoming a member, along with his answers:

What did you have to do to become a member of a virtual band?

“To join the band, I went to their website and signed up with my email address”.

Does the virtual band have a name? “It’s called Virtual Band”.

How does your part fit in with all the other performers?

“My part is edited to blend in with other members and sections”.

How much editing is involved for the editor of the project to put the final virtual performance together? “The last project took about 60 hours of editing to sort through 300 musicians. This project should take longer because there are 100 additional musicians”.

Will the Virtual Band performance show you performing your part, or is it audio only? “The finished product will include video and audio; however not all sections or parts are shown at the same time because of section features, rests, etc.”.

About how much time did you take to prepare your part for the performance?

“I had to practice my part for about 15 minutes a day for a week before recording. The recording took about 30 minutes between setting up and shooting the video”.

How does being a member of the Virtual Band differ from performing with your peers? “The Virtual Band is a different experience because you are totally alone in your performance. There is no opportunity to learn from peers. On the other hand, it pushed me to be better, because if you mess up in a live performance, your mistake can usually be covered up. In the Virtual Band, your recording has to be almost perfect to satisfy your personal standards. In addition, whenever you participate in the Virtual Band, you have to interpret the music for yourself, meaning no one is telling you how to add musically to the piece. You have to do that yourself”.

Was there any knowledge or aspect of technology you needed to learn to take on this project? “The only technology required is a smartphone and a device to use as a metronome. The smartphone is used to video your performance. The metronome is hooked up to earbuds or headphones to ensure that you are staying with the beat. For me, I used my phone as a metronome, and my dad’s phone to video”.

About how many performers were involved in the Virtual Band?

“There are 390 members contributing to this project”.

Is it possible for others to listen to and watch the finished product? If so, how? 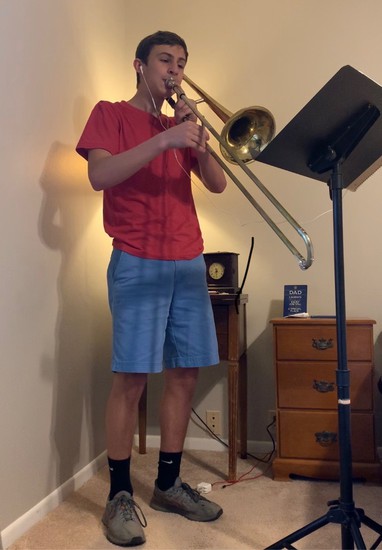 You can protect yourself and help prevent spreading the virus to others if you:

Wash your hands regularly for 20 seconds, with soap and water or alcohol-based hand rub

Touch your eyes, nose, or mouth if your hands are not clean

Send your unique face masks if you have made one...here's mine 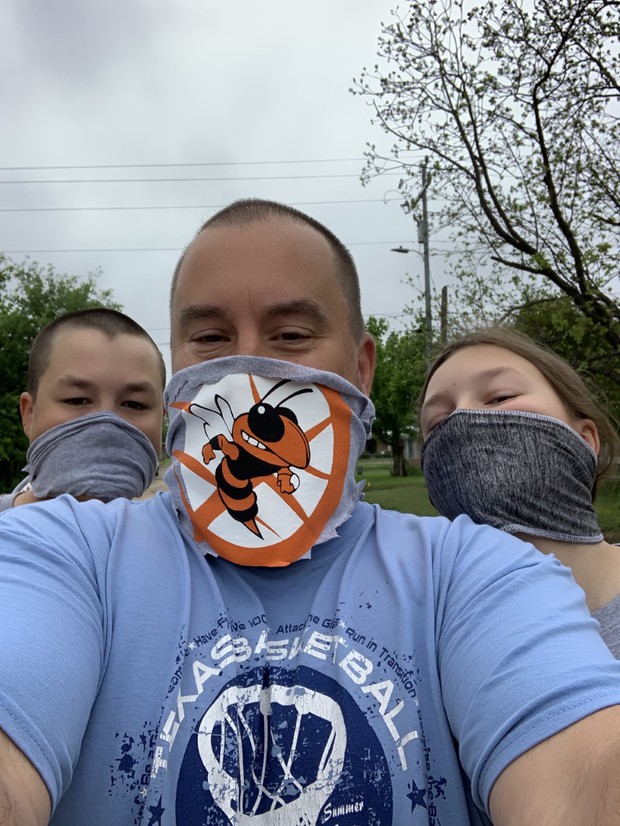 #jacketfitchallenge here’s what Coach Heiner did the other day. You can out the feed each day and share or see a great workout. More to come. Go have fun and do something different today!

Click on the links below for information such as Teacher Office Hours, How to Check you Email, and all Google Classroom Codes

Please click below if you need this info.
pdf

How to Check Your Email 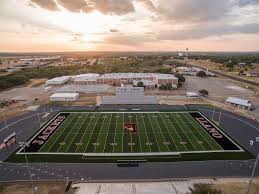 Jeni is using Smore newsletters to spread the word online.