Why is it important? 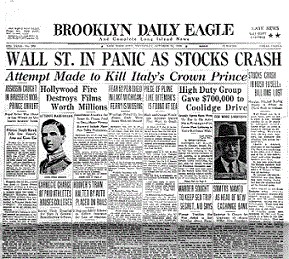 On October 29, 1929, Black Tuesday hit Wall Street as investors traded some 16 million shares on the New York Stock Exchange in a single day. Billions of dollars were lost, wiping out thousands of investors. After Black Tuesday, America spiraled downward into the Great Depression (1929-39), the deepest and longest-lasting economic downturn the United States has ever known.

www.history.com
Black Thursday brings the roaring twenties to a screaming halt, ushering in a world-wide an economic depression.

The Stock Market crash led to the terrible time known to the U.S. as the Great Depression. This bankrupted companies and caused many people to lose their jobs. People wrote literature trying to explain what had happened to the stock market to make it crash. People had little money and were sad and angry. This most likely led to more dark and tragic literature.