The Great Depression took place in the United States between 1929 and 1936. It began sometime after a stock market crash in October of 1929. Consumer spending had dropped as well as investment. Production started to slow down and stock prices kept on rising. Later, investors began to find themselves in complicated predicaments. 12.9 million shares were traded. This day is known as Black Thursday. Following that, on Black Tuesday, 16 million shares were traded. All trades became useless and investors who borrowed money to buy stocks were in a dilemma. Most companies had to let their employees go causing many people to be left unemployed. President Franklin D. Roosevelt worked hard to reduce the impact that The Great Depression had on America.

The American Dream has a different definition to everybody. James Truslow Adams wrote a book in 1931 called The Epic of America. In the book he wrote "that dream of a land in which life should be better and richer and fuller for everyone, with opportunity for each according to ability or achievement.” He later says that people have lost the idea of the American Dream and have become mistrustful of it. He continues with saying that it is not a dream of motor cars, big houses, all the money in the world, but rather a dream in which men and women should be able to be respectful to others, while living their lives to the fullest.

The shortest way to define what The American Dream means, is that everyone should work hard to live their life to the fullest. There are many definitions based on what you personally feel is The American Dream. It could mean that people should respect one another and people should respect themselves. It could mean that people use hard work to achieve something in your life. It mostly means to work hard and in return you will live your life to the fullest. During the Great Depression it lifted the spirits of people by telling them that there was more out there for them to achieve. An example would be Albert Einstein. He had many, many fails in his life but with hard work and determination he was able to achieve light and lived his life to the fullest. That’s the American Dream, working hard to achieve what you want to achieve in life. 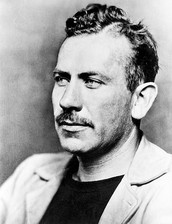 John Steinbeck is an American author who wrote twenty-seven novels including ‘Of Mice and Men’. He won a Nobel prize in 1962. He went to Stanford University in 1919 but later dropped out and continued to write. In 1937, he came out with a best selling book called ‘Of Mice and Men’.

Another best selling book he wrote was ‘The Grapes of Wrath”. This book was on the bestseller list as soon as it came out and stayed on that list for over a year. This story was very relatable to a lot of people. In 1940, ‘The Grapes of Wrath’ screen version was one of the selected 25 films for preservation by the library of congress. Steinbeck later died from a heart attack in 1968. He wrote about half a dozen books in one decade, writing America’s greatest books.