The Essence of Diwali

Diwali is the festival of lights and one of India's most important festivals. It is celebrated in many different ways and forms. It is a tradition that has lasted for thousands of years. These drawings represent the essence of Diwali in a beautiful manner. 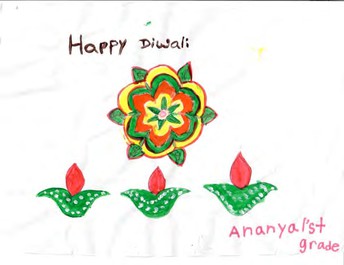 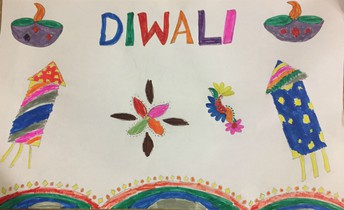 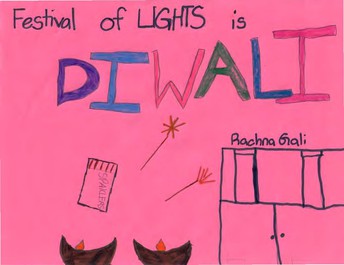 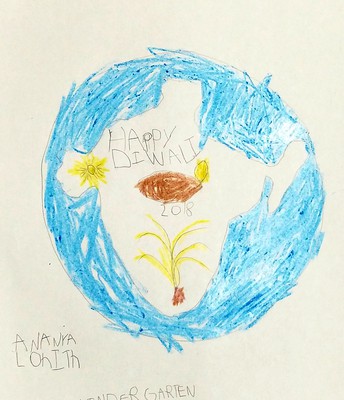 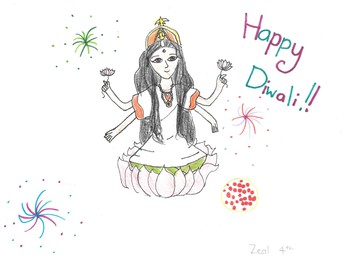 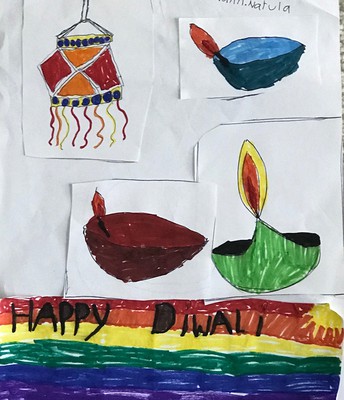 Why Should We Go To Bhartiya Vidyalaya? - Riya Mishra (8th Grade)

Indian Americans should go to temple because its a way to connect to our heritage. We all come from Indian ancestry and deserve to learn about it. Bharatiya Vidyalaya is a place that provides students the ability to learn about the Indian culture, religion, and different languages.

Bharatiya Vidyalaya has helped me learn Hindi, and learn about Hinduism, and the Indian culture. My favorite class is culture because you get to learn about the Indian culture and then you can compare it to western culture. The temple is also a place where students can associate with people that come from similar backgrounds. In school or any other place you won't find many Indian people that are like you but at the temple there are many Indian Americans that you could associate with.

Thanks to the temple whenever I go to to India I can talk to my grandparents fluently in Hindi and also see the culture and understand why they do that. The temple has made me be closer with my family and the place where I come from. The temple also celebrates many festivals that you could go to like Diwali, Holi, and Ganesh Festival. In these festivals students can participate in dances, dress up in Indian clothing, and do things that people in India might do. Overall Bhartiya Vidyalaya is a place where students can learn about their ethnicity and learn about the Indian side to themselves. 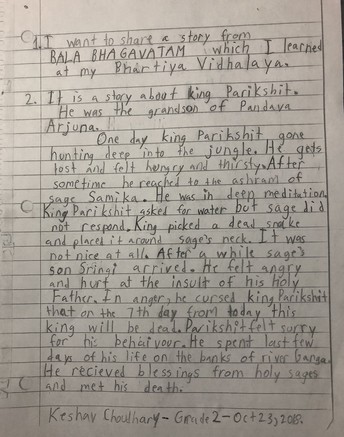 "I want to share a story from Bala Bhagawatam which I learnt at my Bharatiya Vidyalaya. It is a story about King Parikshit. He was the grandson of Pandava King Arjuna."

One day king Parikshit went for hunting deep into the jungle. He got lost and felt hungry and thirsty. After sometime he reached the ashram of sage Samika. Sage Samika was in deep meditation. King Parikshit asked for water but the Sage did not respond. King picked a dead snake and placed it around the Sage's neck. It was not nice at all. After a while, sage's son Sringi arrived. He felt angry and hurt at the insult of his holy Father. In anger, he cursed king Parikshit that on the 7th day from that day the king will be dead. King Parikshit felt sorry for his behavior. He spent the last few days of his life on the banks of river Ganga listening to Shrimad Bhagavatam. He received blessings from holy sages and met his death.

This section is all about the Bhagavad Gita and experience, meanings, and representations of it in our lives. We all know we must live as it says, but how? Srikrishna Chakravarthi shows us the divine aspect of life with the slokas presented in the Bhagavad Gita.

Every year, the Bharatiya Vidyalaya provides the invaluable opportunity to learn one chapter from The Srimad Bhagavad Gita - a scripture which answers all of our burning questions and acts as a manual on how to live our life to the fullest. This year, we are learning the second half of Chapter 18 (verses 41-78) having learned the first part last year. Chapter 18 is called Moksha – Sannyasa Yoga (The Yoga of Liberation by Renunciation) and it encapsulates the content of the entire Gita. Bhagavan Krishna answers many questions in this chapter including “What is the difference between Tyaga and Sannyasa?” and “How can one become fit to attain Brahman?” before culminating with the charama sloka or the most important sloka in the entire Gita.

Lord Krishna instructs us to abandon all materialistic duties which inhibit our ability to contemplate upon God and to surrender our ego to him. We must remember that there is a higher power which is the impetus behind all creation and that we are not the true doer of all our actions. If we remember God, dedicate our actions to him, and do actions merely for his pleasure, Lord Krishna guarantees that he will grant liberation with his divine grace. Therefore, let us all learn the Gita and live by its timeless message to inculcate the gem of spirituality into our lives.

Meaning: For those who are completely absorbed in God-consciousness, the oblation is Brahman, the ladle with which it is offered is Brahman, the act of offering is Brahman, and the sacrificial fire is also Brahman. Such persons, who view everything as God, easily attain Him.

Meaning: It is I who is the fire of digestion in the stomachs of all living beings, and I combine with the incoming and outgoing breaths to digest the four kinds of foods.

Why should we chant this?

These two gems from the Bhagavad Gita are to be chanted before parttaking of food. In the first verse, it is explained that one is to eat with the mindset of performing a yajna for God. Therefore, one is to eat merely to keep the body functioning to perform his/her duties in life, not for temporary pleasure. In the second verse, by stating that he is the digestive fire, Lord Krishna reminds us all that he is omnipresent and is the driving force behind everything. In the Narayana Suktam, this is confirmed by the statement “antar bahishcha tat sarvam vyapya narayana sthitaha” meaning everything inside us and outside us is the Lord. From this, we understand that it is imperative we eat food in the right mindset and use the energy from God's prasad for the greater good.

I would like to share my experience of riding a camel in Pushkar, Rajasthan, India this summer. We got out of the car and the hot dessert wind greeted me. we had stopped in the dessert just so that my brother and I could ride a camel. My dad went inside a little tent and my brother and I followed. I was jumping with anticipation. My dad started talking to the guy and paid, then we were led out to the camels. Then I started to doubt myself. Thoughts were racing through my head. What if I fall off, how would we get up there, and once we got on how would we get off? The guy made the camel sit down and asked who wanted to get on first. I pushed Abhi forward. He slung his foot over and with a little help was able to get on. Now it was my turn. I slung my foot over the animal cautiously and was sitting on the animal. The man told us to lean back and we learned why quickly. The camel lifted its back legs and I almost fell forwards, but I caught myself. Then it lifted its back legs. Then we were off. At first it was scary but, when you relaxed it was nice. After a little while we stopped. “Is it done already?” I asked my dad. We were in a place full of tents. They made the camel sit and we got off. They dressed us up like locals and we took pictures. Then we got back on the camel. We went around, and everything was going well. we were passing a village when my dad dropped his phone and the camel almost stepped on it. The guy guiding our camel got my dads phone and to catch up the camel ran. Before we knew it, it was over we got one last picture and said goodbye. It was big fun, and I would love to do it again. 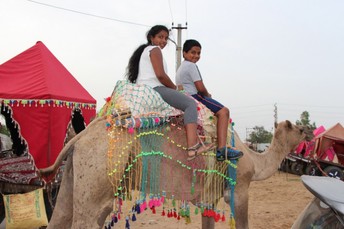 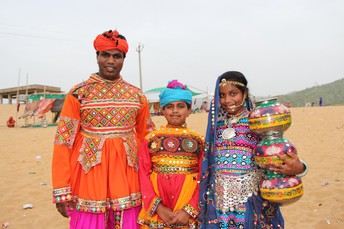 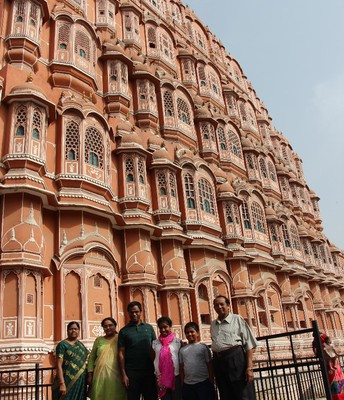 The religion followed by Hindus worldwide is “Sanatana Dharma” or “eternal order.” Hinduism is the name given by Westerners derived from the word Indus. Sanatana Dharma is the most practical way of living life preparing an individual to attain the one and only important goal of human life, namely Moksha or Liberation.

Sanatana Dharma divides life into four stages or ashramas and each stage prepares an individual to fulfill his or her destiny. The first stage is “Bramhacharya” or “student life” in which an individual learns the knowledge in the scriptures. This knowledge enables one to decide whether to enter into the next ashrama in life namely “Grihastha” or “householder” or directly enter the last stage of life which is “Sanyasa” or “renunciation.” If the individual decides to enter into the life of a householder then he or she will have to go through the third stage of life namely “Vanaprastha” or “withdrawal” from worldly affairs before “Sanyasa.”

The student and householder roles are ideal to practice “Karma Yoga.” Karma yoga means performing the right action with the right attitude. Right action is the obligatory duties one has to perform according to one’s station in life. Right attitude is performing these actions with detachment and equanimity to the fruits of action. Karma yoga purifies the mind in preparation for the highest knowledge of liberation.

The “Vanaprastha” or “withdrawal” stage is ideal to practice “Upasana Yoga” or meditation. The scriptural knowledge gained earlier in life has to be meditated and reflected upon in order to be assimilated. Upasana yoga makes the mind single-pointed and focused.

A mind thus purified by Karma yoga and focused by Upasana yoga is ready for “Jnana Yoga” or “Vedanta” in the final stage of “Sanyasa.” At this stage the knowledge gained earlier in life is assimilated to bring about a transformation in one’s life. Removal of ignorance with Self-knowledge is Liberation or Moksha. This can be experienced while living this life now.

Sanatana Dharma will lead an individual from animal-human to human-human to God-human. May we all follow it and experience the beauty of Self-unfoldment. Hari Om.

What I Like About the Jain Class - Anisa Parekh (5th Grade)

I like learning about my religion and how it’s important. I enjoy playing games and getting candy in the class. I also like the skits we put on at the end of the year and the dinner afterwards. My group performed a skit about lying and how the consequences of it add up. The Jain class is a fun place to be and an amazing place to learn about the Jain religion. 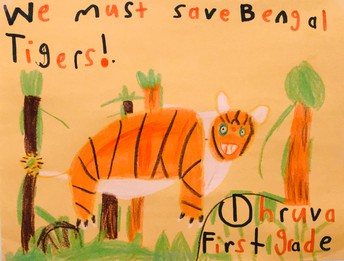 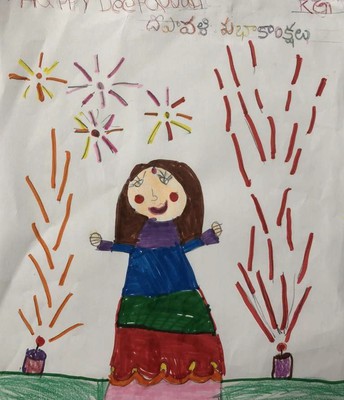 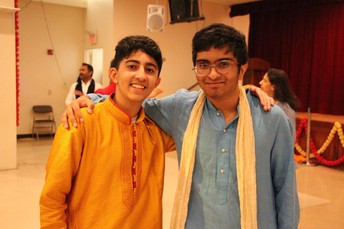 Hello everyone! I am currently studying in 10th grade at CR North. I attend Bharatiya Vidyalaya as a senior student and help with various activities around the temple like this newsletter. 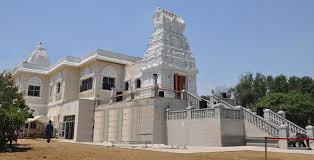