Get email updates from Plains: 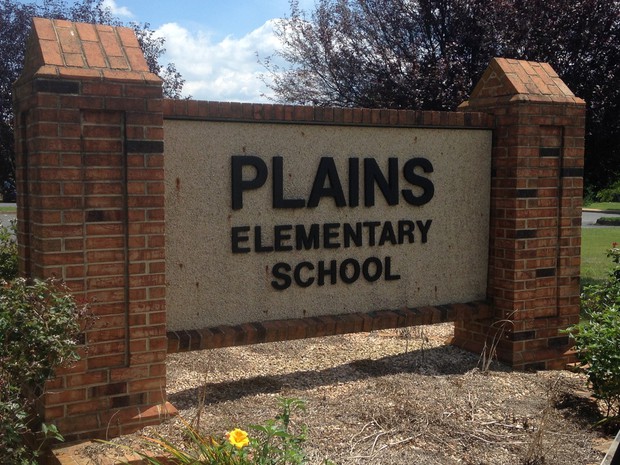 Our school is a family consisting of students, parents, community members, and school staff. All members of our school family support the principles of respect, responsibility, fairness, trustworthiness, caring and citizenship as we care for and learn from each other. We are committed to assuring that a safe, positive learning environment is created in which all students feel accepted and appreciated. Our mission is to help students acquire the desire and the skills to take an active role in their own learning and to assume responsibility for their own behavior.

This mission is best accomplished when school personnel maintain high expectations for all students, take responsibility for professional growth, monitor students’ progress on a frequent basis, and promote effective home-school communication and involvement. At Plains Elementary School, we truly believe that the student always comes first.

During the late 1960s, the Rockingham County School Board was faced with the question of what to do with three aging elementary buildings on the northern end of the county: Broadway, Timberville and Tenth Legion. In 1968 the School Board voted to build a large elementary school in Timberville to replace the three older schools. A New School Study ommittee was formed to develop educational specifications for the new school. The committee included teachers, administrators, parents, and students. The committee studied and visited a number of buildings with innovative designs and, in 1969 presented their report to the School Board. It was the feeling of the committee that the building should be flexible in design to accommodate newer instructional methods which included learning-center-based instruction and team teaching. The School Board employed the architectural firm of Davis and McClintock to design the facility. The ground was broken for the new facility in the spring of 1971, and Lantz Construction Company of Broadway was chosen as the contractor for the new building, which would cost approximately one million dollars. The design featured six open-space “pods” with a gymnasium and cafeteria connected by the office area and a main central hallway. In September of 1971, Tenth Legion principal Larry R. Huffman was chosen to head the new school scheduled to open in the fall of 1972. An Open Space Planning Committee was formed to develop an educational plan for the school which would incorporate elements of the British Primary program. One of these features was multi-age grouping where each of the instructional “pods” would contain a team of teachers with children of different grade levels. After teachers were selected for the new school, a variety of in-service training programs were provided.

Plains Elementary School opened in the fall of 1972 with nearly 1000 students in grades 1-6. The parents and community were generally enthusiastic about the new school and the innovative programs, and the school enjoyed a high level of public support.

However, by 1976, some of the innovations were beginning to go out of favor and some parents and School Board members began to question the concepts on which the school was based and began to insist on a more traditional closed classroom. In 1977 and 1978, the two groups, those favoring changes to a more traditional model and those favoring the continuation of the more open concept, clashed in a series of public meetings. The end result adopted by the School Board in the summer of 1978, as a compromise measure, was the addition of moveable walls to partially enclose the instructional areas. The compromise appeared to satisfy both sides and some elements of the “open” model were preserved as well as the opportunity for more traditional approaches.

Also in 1976, the sixth grade was shifted to the middle school and the kindergarten program was started. Also during this time period, the large “crawl space” (Pod R) a large basement area, was converted to instructional usage. The population at the school continued to fluctuate, dropping from the original 1000 students to about 750 students in the mid 1980s. As the school entered the late 1980s, the population started to rise again and by 1987 the enrollment again reached over 800. In 1987, the School Board decided to build a new school at Lacey Spring which would move approximately 200 students from Plains. In the fall of 1989, Lacey Spring opened its doors, and Larry Huffman, who had been the first principal at Plains in 1972, left to become the first principal at the new Lacey Spring Elementary School. Long time Assistant Principal Johnny Funkhouser, who had been at the school since its construction, also left to become the principal at Fulks Run Elementary. W. Marshall Price was named the new principal at Plains. Under Mr. Price’s leadership, permanent walls were installed between classrooms in the early 1990s and the school’s first computer lab was opened.

After another population shift when Lacey Spring became overcrowded, about 125 students from Lacey Spring were moved back to Plains in the fall of 1995. In the fall of 1997, Marshall Price left Plains to become principal at Elkton Elementary, and Nancy Lantz became principal, a position she held until 2000. Lynn Sprouse became principal in 2000. During Mr. Sprouse’s leadership, a fire sprinkler system and new ceilings were installed during the 2006-2007 school year. The Pod R area of the school was also renovated and permanent classroom doors were installed.

In the fall of 1998, the opening of the new John C. Myers Elementary School in Broadway reduced the population of Plains by approximately 300-350 students. A division-wide redistricting plan was implemented during the 2008-2009 school year which reduced the Plains student population by 50-60 students, with those students again being redistricted to Lacey Springs Elementary School. Enrollment is reported to fluctuate between 425-450 students for the 2008-2009 school year.

In the summer of 2015, Joseph Kapuchuck became the principal of Plains Elementary School. During his tenure at Plains, Mr. Kapuchuck worked tirelessly to cultivate an engaging and supportive learning environment for students and teachers. He supported an initiative to have our outdoor track paved. Likewise, with significant grant funding and generous donations, our school has added a greenhouse and a large outdoor classroom to facilitate innovative outdoor learning opportunities for children. Engaging local artistic talent, Mr. K added vibrant educational murals to complement the elementary curricula. In the summer of 2021, Mr. Kapuchuck left Plains to assume the Principalship at Peak View Elementary School in Penn Laird. The current population at Plains is just under 450 students, and Todd Johnson was named as the new Principal at Plains in the summer of 2021.

Follow Plains ES
Contact Plains ES
Embed code is for website/blog and not email. To embed your newsletter in a Mass Notification System, click HERE to see how or reach out to support@smore.com
close