Admin is using Smore newsletters to spread the word online.

Get email updates from Admin:

where our community is committed to following

the teachings of Jesus. 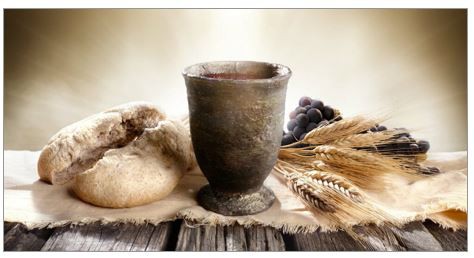 I hope that this newsletter finds you all well and keeping warm.

Next weekend, 12/13 June, our Year 4 class celebrates a special moment in their faith journey.

It will be the first time that they will receive the Body and Blood of Jesus through the Sacrament of Eucharist (Holy Communion).

This sacrament also known as the Lord's Supper, is taken in remembrance of what our Saviour our Lord Jesus Christ has done for us on the cross. The bread represents Jesus' body that was scourged and broken before and during His crucifixion, and the cup represents His shed blood.

I would like to wish all students receiving this Sacrament God’s blessings and also ask our school community to pray for these special candidates. 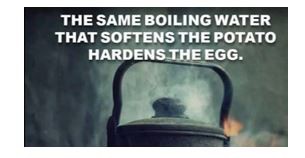 When I am on duty, I thoroughly enjoy having various conversations with the students.

Generally, we talk about a myriad of topics, but one topic that has a consistent thread running through our conversations is what they do and how they act when faced with adversity. I love sharing these stories with the kids and generally talking of how we can become strong on the inside.

I remember a story I read many moons ago and saved it on my laptop. (For a rainy day!!!)

Once upon a time a daughter complained to her father that her life was miserable and that everything was too hard.

She was tired of fighting and struggling all the time. It seemed just as one problem was solved, another one soon followed.

Her father was a chef, and one day took her to his kitchen. He filled three pots with water and placed each on a high fire.

Once the three pots began to boil, he placed potatoes in one pot, eggs in the second pot and ground coffee beans in the third pot. He then let them sit and boil, without saying a word to his daughter.

The daughter, moaned and impatiently waited, wondering what he was doing. After twenty minutes or so he turned off the burners.

Turning to his daughter, he asked her, “what do you see?”

“Look closer” he said, “and touch the potatoes.” She did and noted that they were soft.

He then asked her to take an egg and break it. After pulling off the shell, she observed the hard-boiled egg.

Finally, he asked her to sip the coffee. Its rich aroma brought a smile to her face.

“Father, what does this mean?” she asked.

He then explained that the potatoes, the eggs and coffee beans had each faced the same adversity-the boiling water. However, each one reacted to the water differently. The potato went in strong, hard and unrelenting, but in boiling water, it became soft and weak.

The egg was fragile, with the thin outer shell protecting its liquid interior until it was put in the boiling water. Then the inside of the egg became hard.

However, the ground coffee beans were unique. After they were exposed to the boiling water, they changed the water and created something new.

The father then asked his daughter, “Which one are you?”

“When adversity knocks on your door, how do you respond? Are you a potato, an egg, or a coffee bean?”

Morale of the Story

In life, things happen around us and things happen to us, but the only thing that truly matters is how you choose to react to it and what you make/take out of it. Life is all about learning, adapting and converting all the struggles that we experience into something positive.

If families have recently changed any personal details, (addresses, phone numbers etc…), please update these changes through our administration staff.

As you would be aware from early newsletters in Term 1, this year Australia is celebrating 200 years of Catholic education in 2021.

On Monday 24 June Mr. La Roche and I along with two Year 6 student leaders attended a special mass for all catholic school in the metropolitan area to celebrate this important milestone at St Mary’s Cathedral. 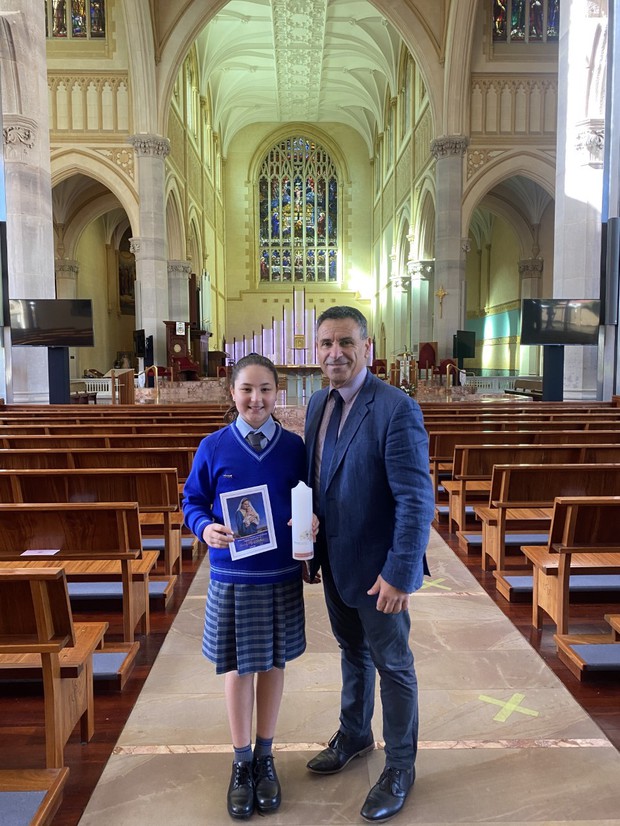 During the last few weeks, some parents may have noticed that we have two new flag poles on the grassed area. This now allows us to fly three flags at one time. Currently, because of reconciliation week, we are flying the Aboriginal flag, Torres Strait island and Australian flags.

I would like to sincerely thank our P&F for providing these flag poles for us.

This was held at Tompkins Park, Melville. 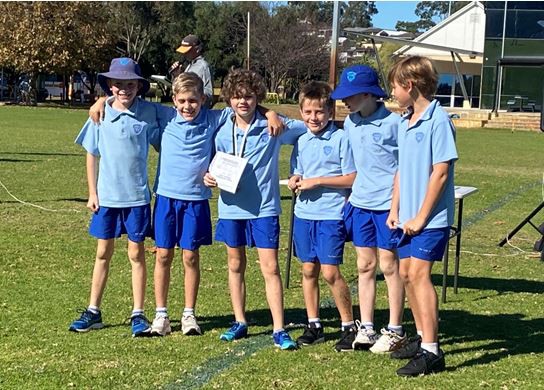 I was so proud to see our runners compete so enthusiastically and to finish the course without stopping. Although we had beautiful weather, the wind did make it a little difficult for them.

Our team did a fantastic job finishing with the highest points for the day and coming second on handicap. Congratulations to all competitors! We are so proud of you and your efforts.

Also a huge congratulations to:

Congratulations also to the Year 4 boys for achieving the champion Team award.

A big thanks to Mr Celenza for organising and preparing our squad for the carnival and to Miss More for her support with recording on the day.

Wishing you all a fantastic weekend!

Our School Advisory Council and Parents and Friends Association often work on projects that benefit our school community and we would love to consult with parents that have expertise and can contribute to these projects! By completing this form, we could call on your business to quote on school based capital works projects, school maintenance, advertising or event management. Your assistance in completing this form is appreciated!

At Our Lady of Fatima School we believe education should always be fun. We provide our students with the foundations for life-long learning which empowers children to thrive in their community with a real sense of belonging and enjoyment of education.

Pre-Kindergarten and Kindergarten enrolments for 2022 are open now. Please find our enrolment form at: https://olof.wa.edu.au/assets/files/Application-_OLOF20212.pdf

Enrolment interviews for Kindergarten 2022 have commenced. Parents and Carers of students currently attending Our Lady of Fatima School are reminded that they are required to submit an Enrolment Application Form if they intend to enrol a younger sibling into the Kindergarten program for 2022 or beyond. We are excited to share that in 2022 we are adding an extra fortnightly Kindergarten session and Kindergarten classes will run Monday, Tuesday and Wednesday each week next year and a full day on a Thursday for Pre-Kindergarten! 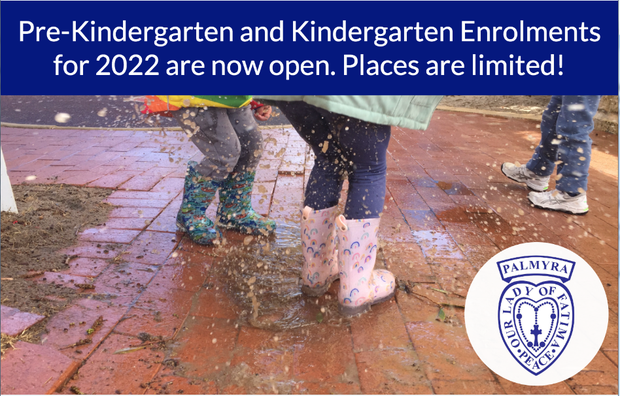 On Wednesday the Kindergarten and Pre-Primary children enjoyed the fun filled Muddy Gully incursion by Educated by Nature. Before exploring the mud, the students listened to a story about the way ochre changes when it is wet and dry. The presenters also explained the connection of land to the ochre and the significance of ochre to the Aboriginal people. The children explored the wonderful mud and clay experiences and got very dirty in the process! 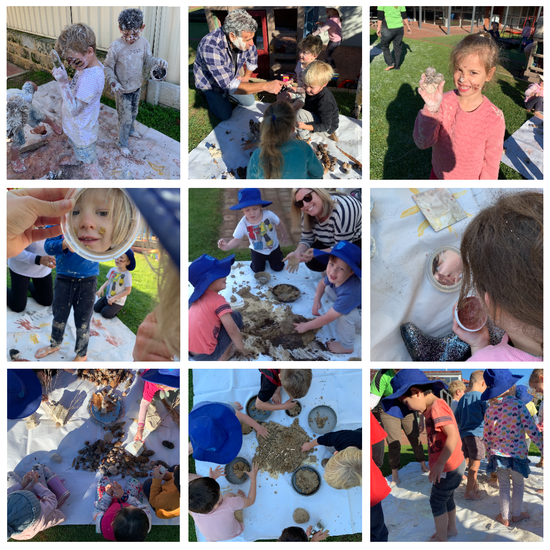 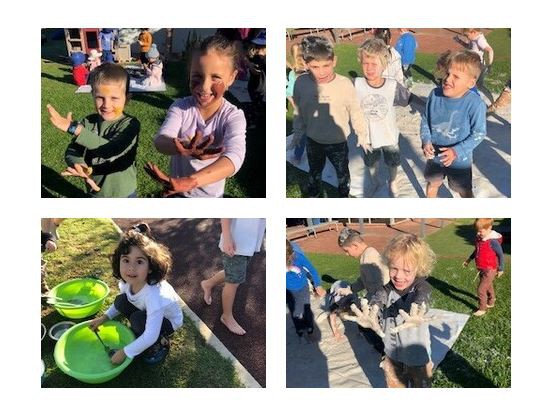 We have exciting news to share! The FREE upgrade from a Single City Membership to a Multi City Membership is working so well at driving Membership sales, it has been extended until Monday, June 14th 11.59pm AEST.

Yes, that’s right! Anybody who purchases a $69.99 Single City Membership will be upgraded to a Multi City Membership valued at $119.99 for FREE! That’s a $50 saving and access to thousands more offers!!!

So, mark your calendars and make the most of this limited time offer to boost your fundraising and help your supporters save even more money wherever they go. 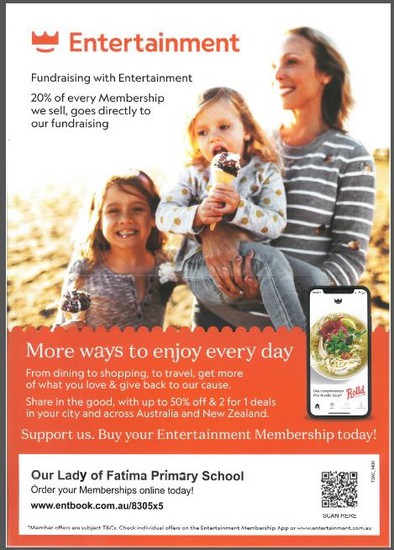 Thank you for all raffle books sold already. If you require any more please see Gaynor in the office. Happy selling!

Courage is our Wellbeing focus for the next few weeks 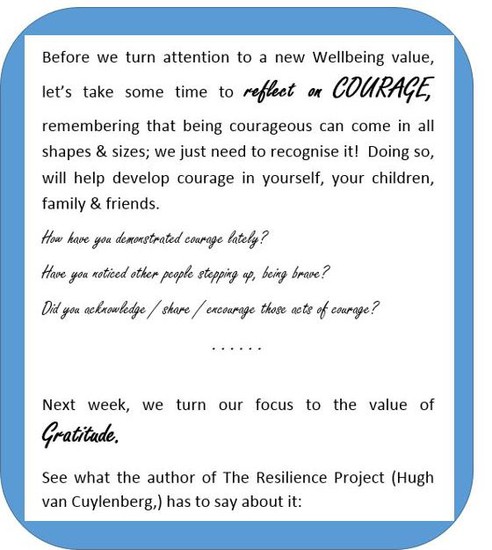 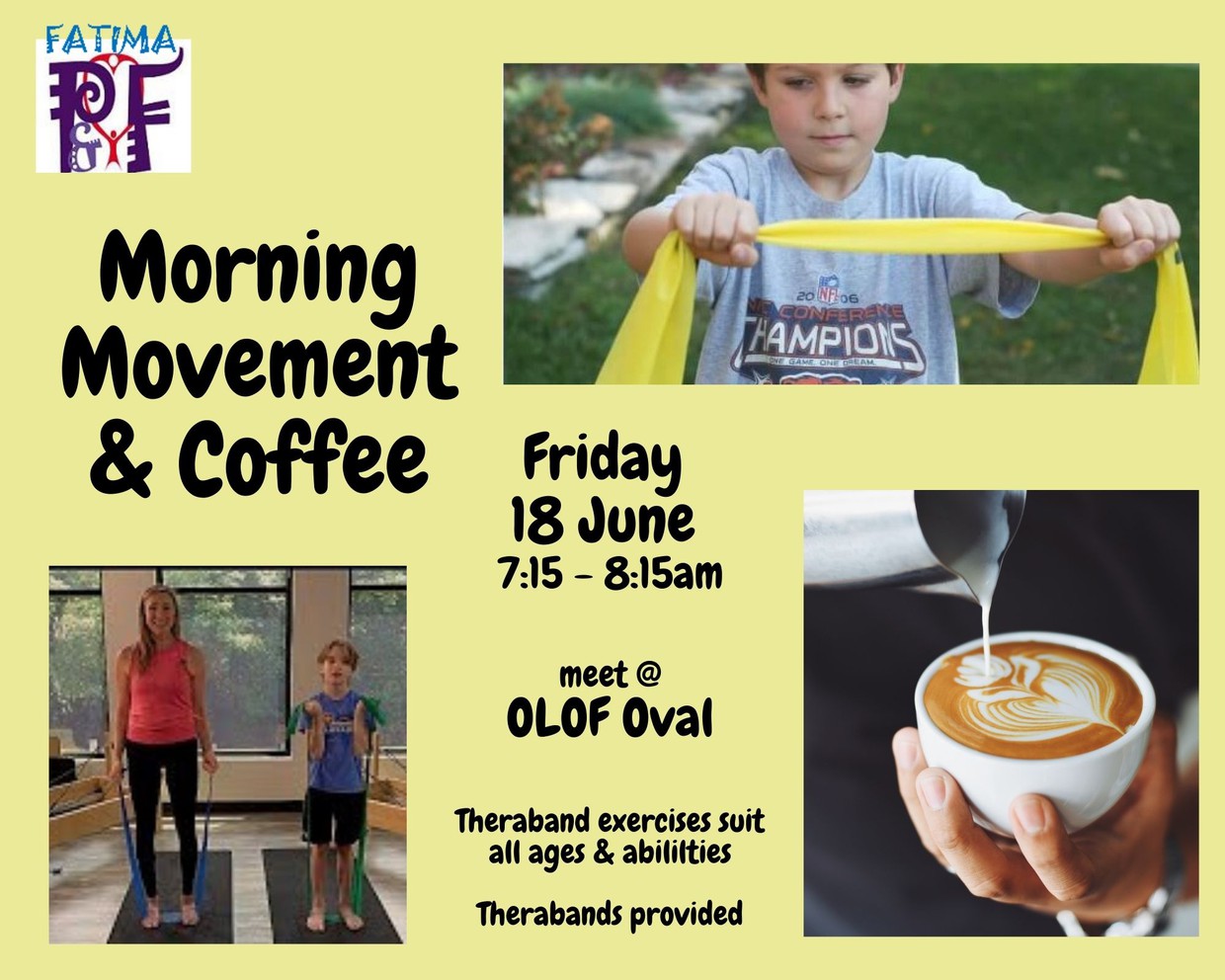 Please book your free tickets via this link:

Keyed Up Music will be teaching keyboard and guitar group lessons next term on Tuesday, Wednesday and Friday during school. Lessons start from $23.65 for a group of 2. If you are interested in your son/daughter learning an instrument, ring Savanna on 1300 366 243 or enrol at www.keyedupmusic.com.au/enrolment-form 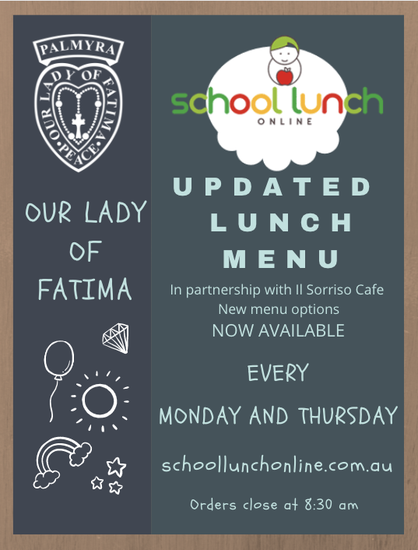 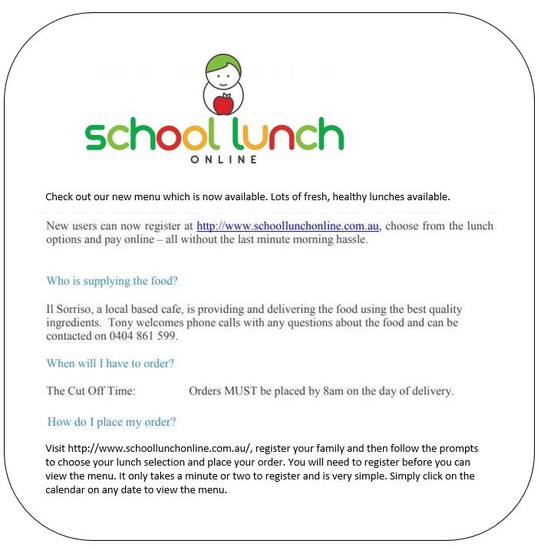 Support our school at Gilbert's fresh market and The Foodies Basket

Gilbert's Support Our School Program donates 1% of the money spent by you to your nominated school every time you shop with us! Sign up for free at the checkout and scan each time you shop.

The Foodies Basket, Attadale donates a $1 for every 100 points accumulated. Just give our School name or show your card each time you purchase. 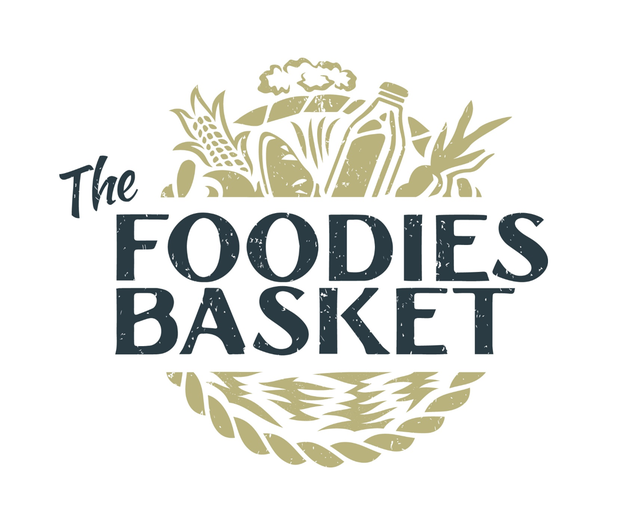 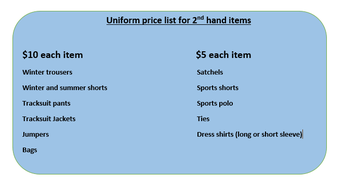 We have a number of items available to buy secondhand from our uniform shop which is open on Thursdays between 8.15am to 9.15am 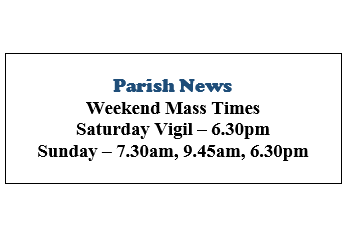 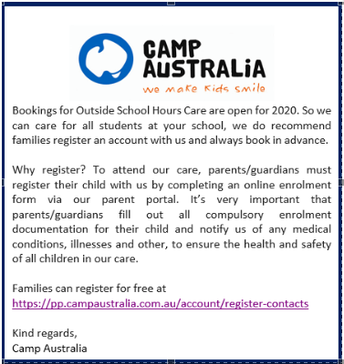 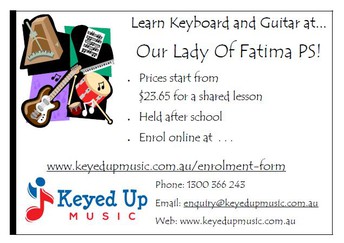 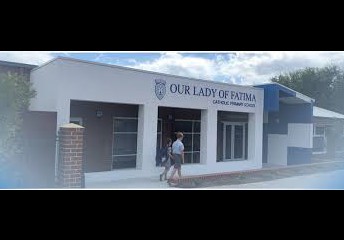 Admin is using Smore newsletters to spread the word online.

Follow Admin OLOF
Contact Admin OLOF
Embed code is for website/blog and not email. To embed your newsletter in a Mass Notification System, click HERE to see how or reach out to support@smore.com
close