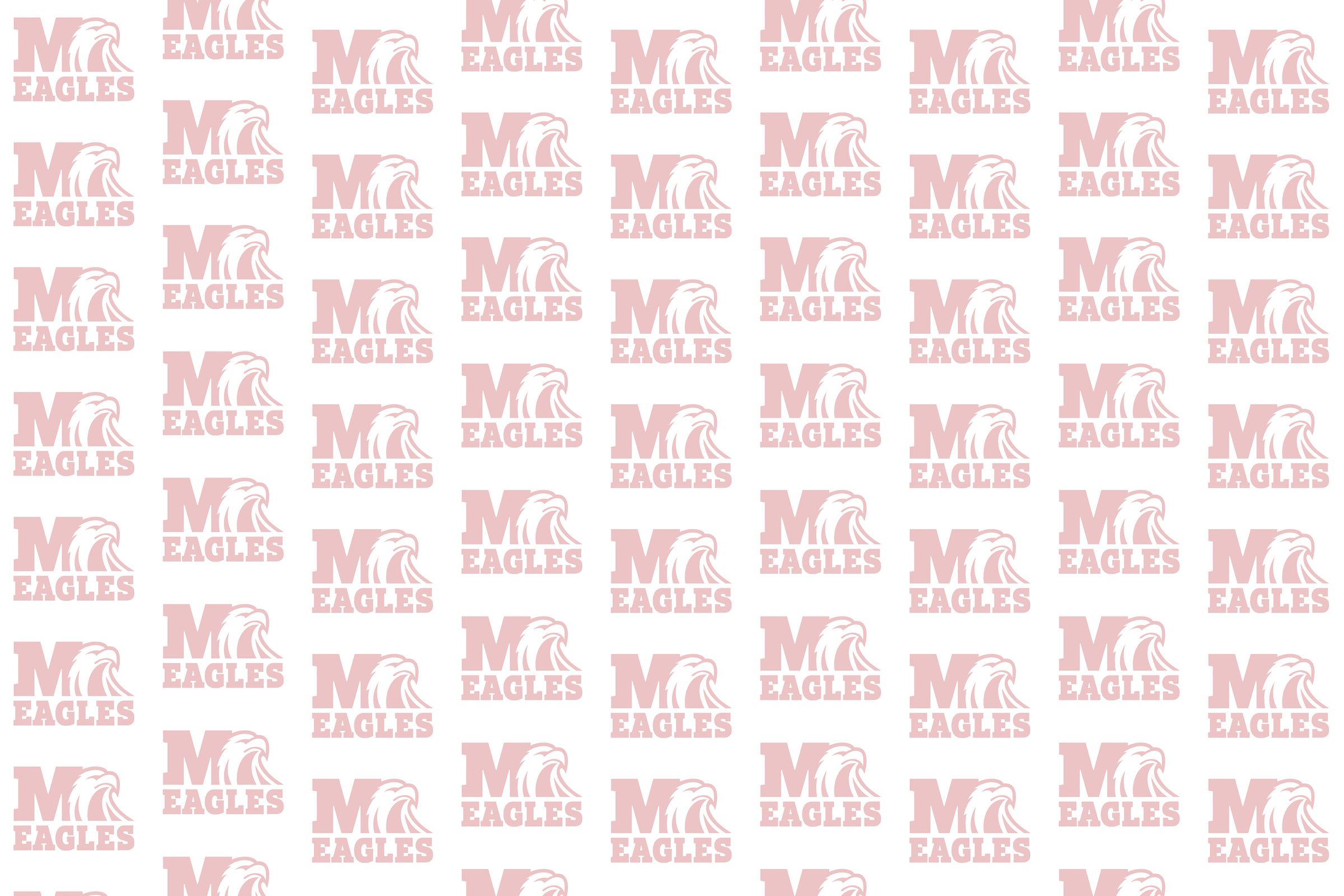 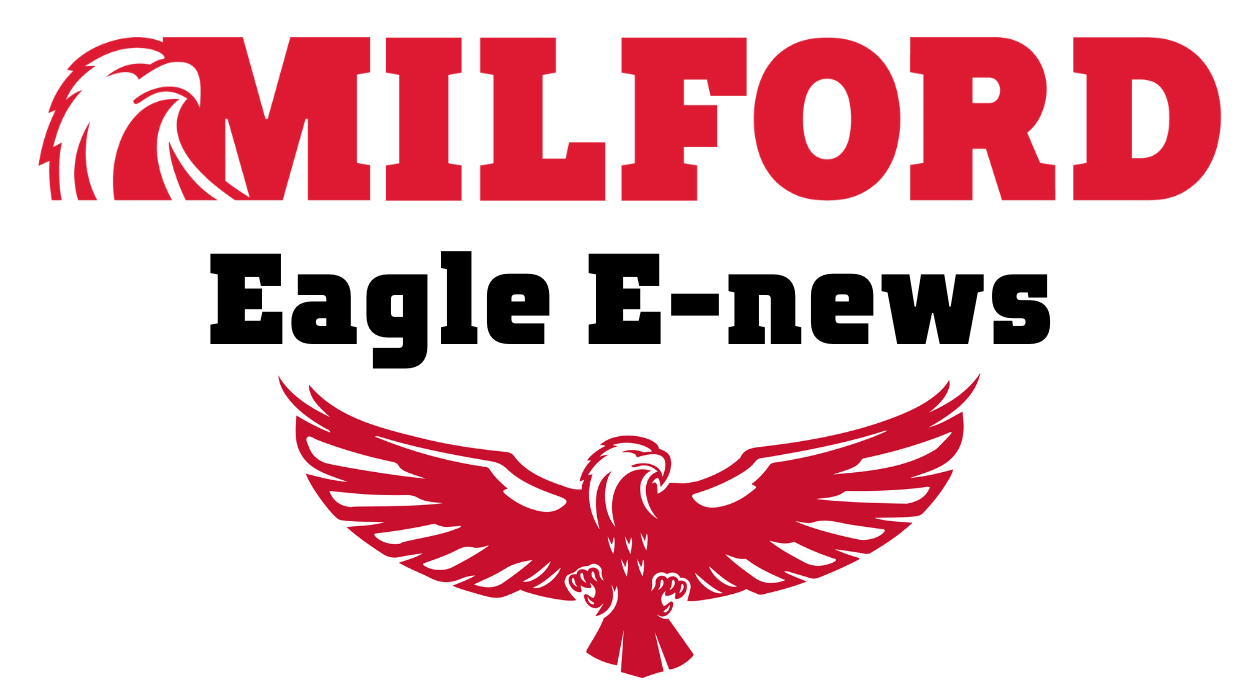 VIDEO FROM THE SUPERINTENDENT 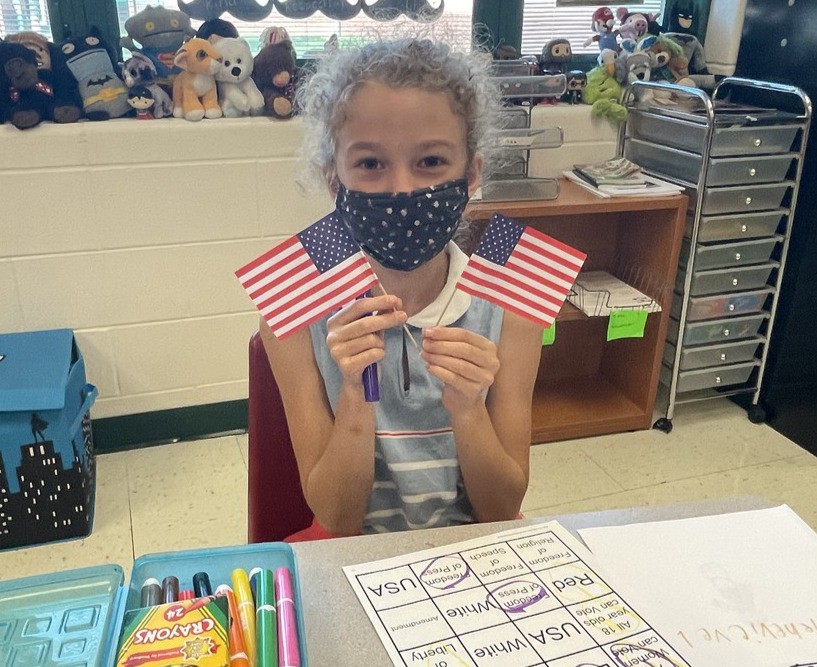 The first three Articles establish the three branches of government: the legislative, the executive, and the judicial branch. The U. S. Constitution has been amended twenty-seven times; the first ten amendments are the Bill of Rights. Some well-known rights protected through the Bill of Rights include those that guarantee freedom of religion, freedom of the press, freedom of assembly, the right to a speedy trial, trial by jury, and freedom from cruel and unusual punishment. Some of the most important amendments to the U. S. Constitution are the fifteenth, nineteenth, and the twenty-sixth, which give all Americans over the age of 18 the right to voice their opinion on issues through voting. 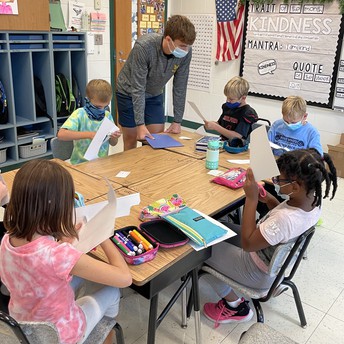 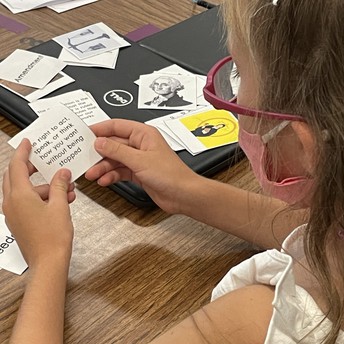 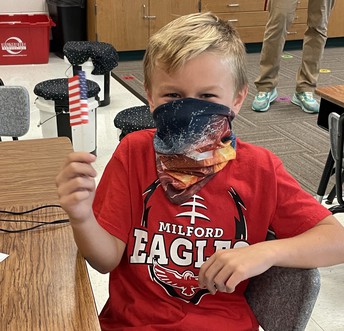 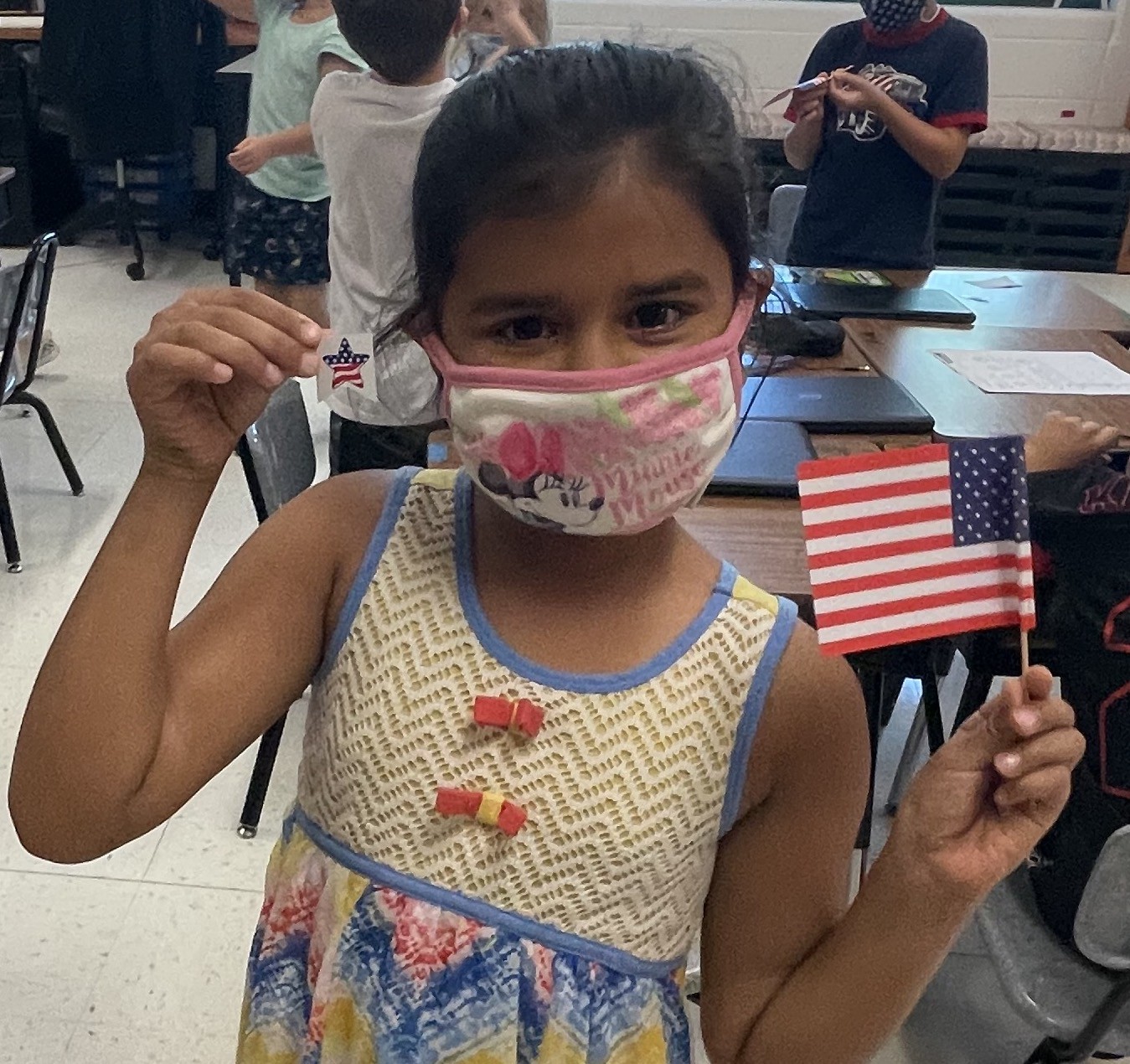 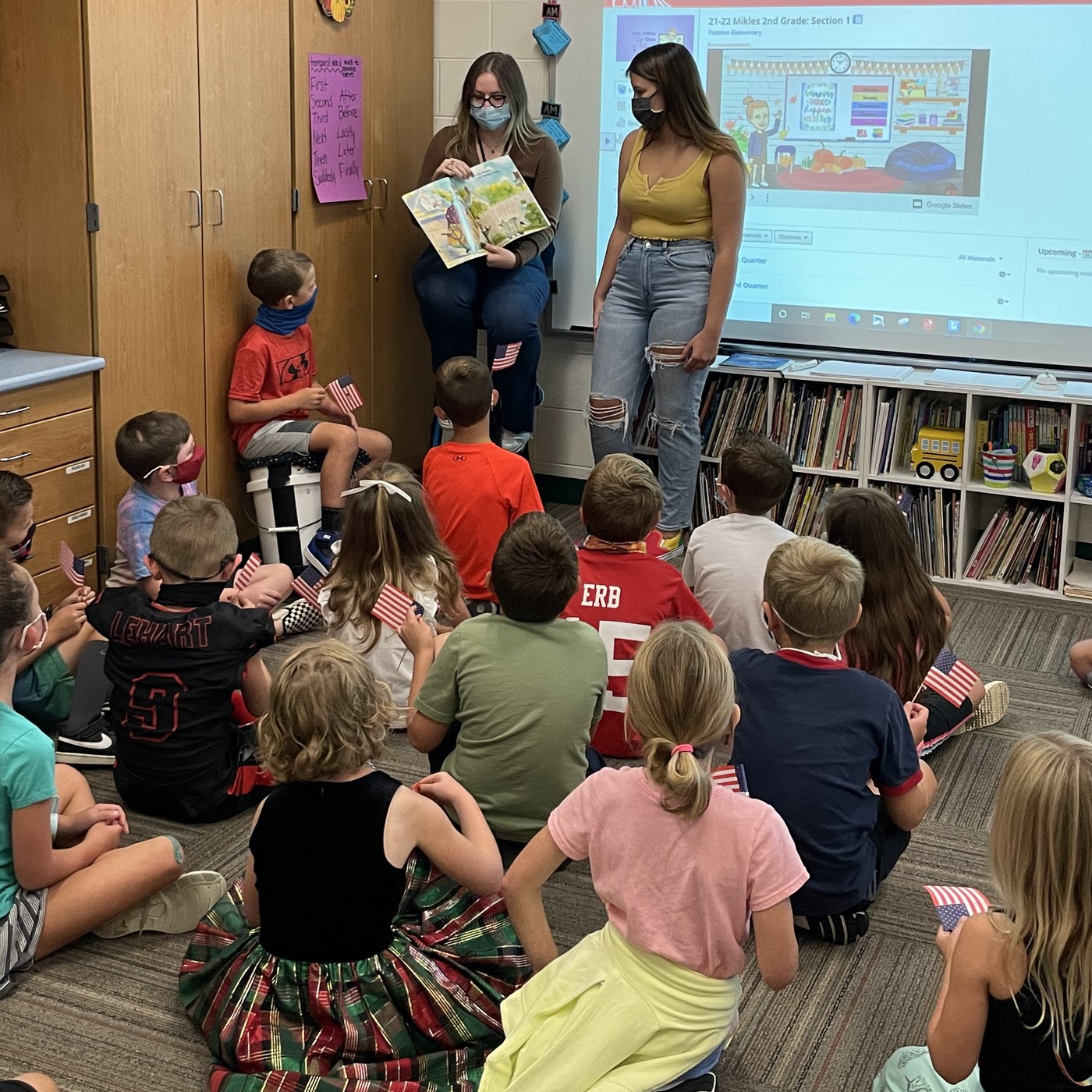 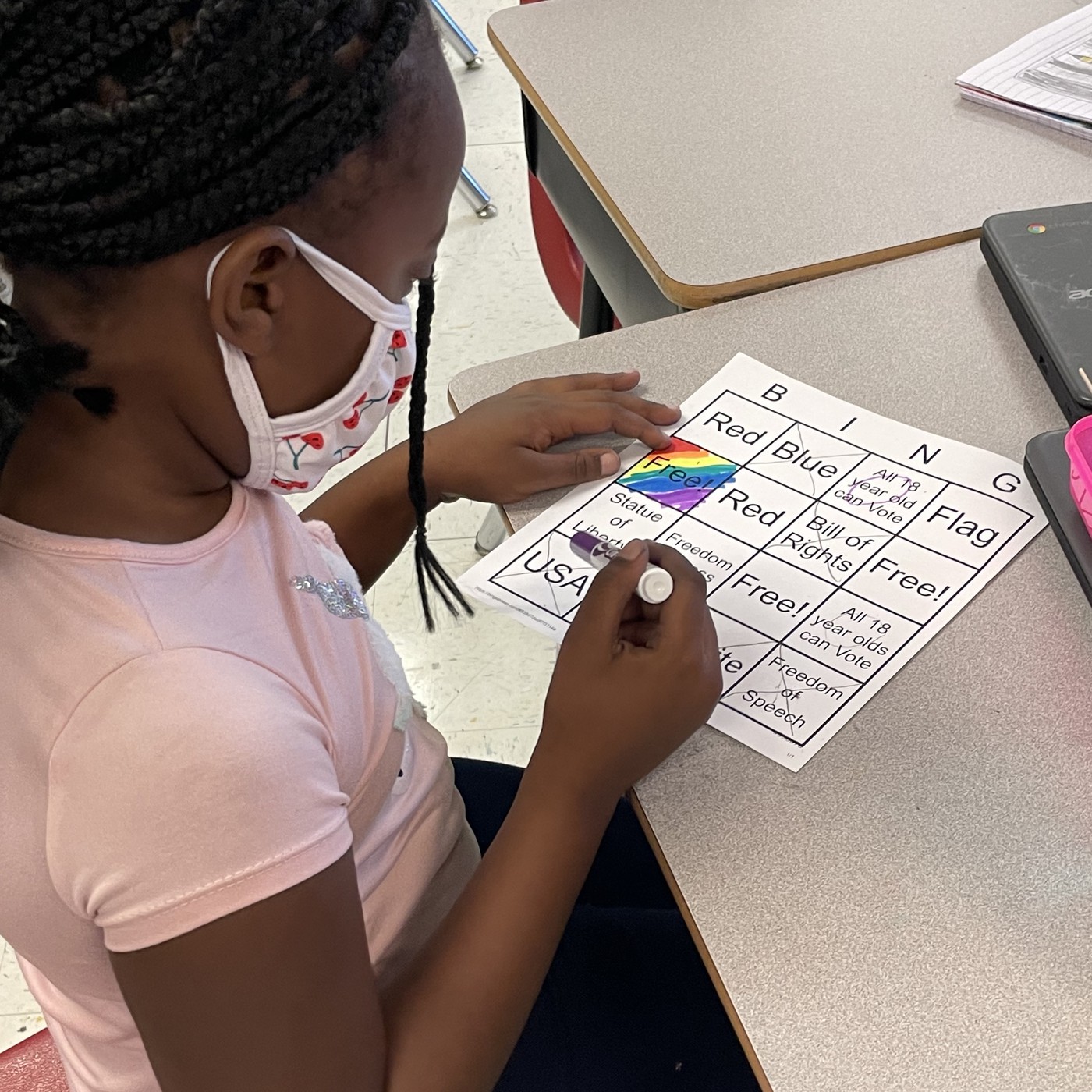 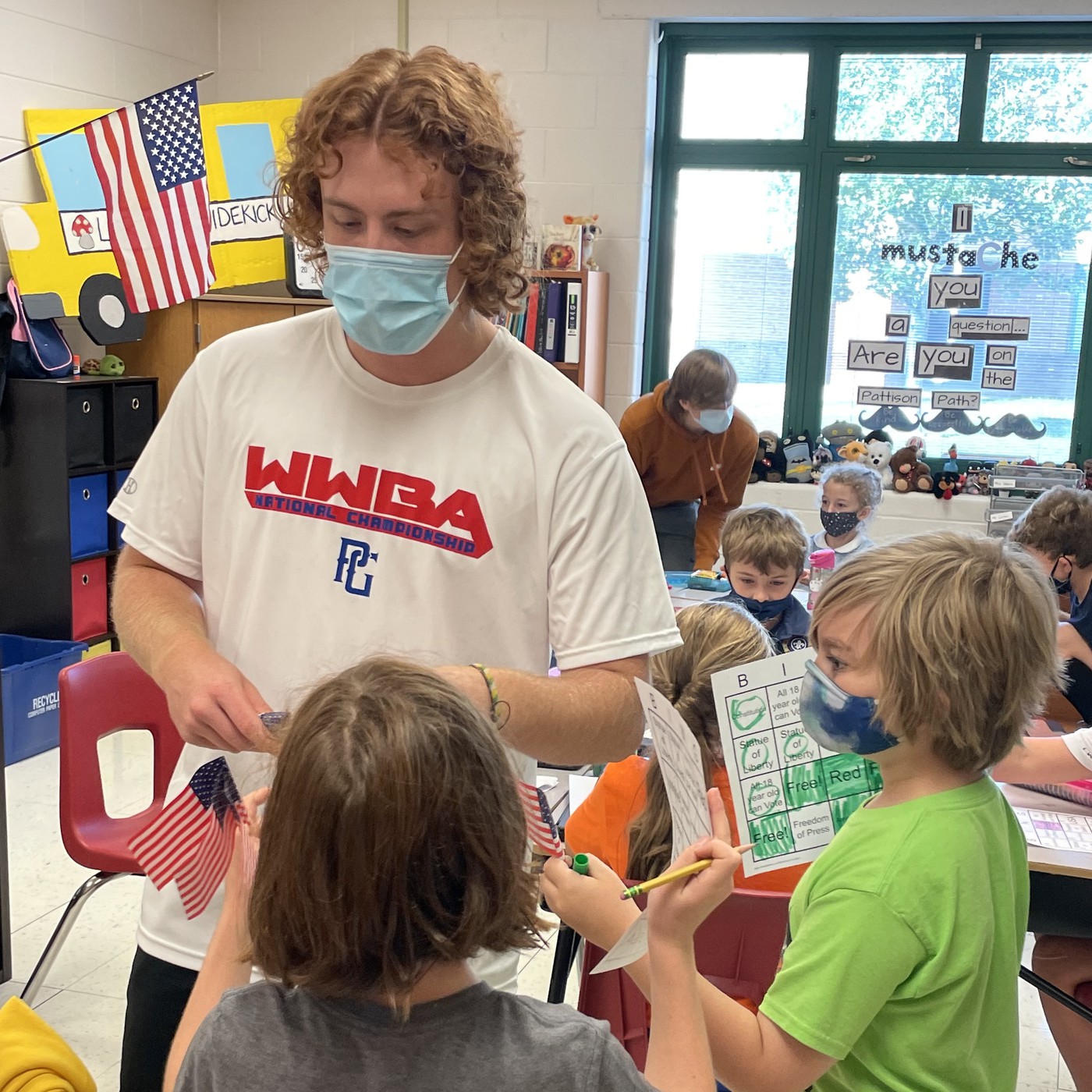 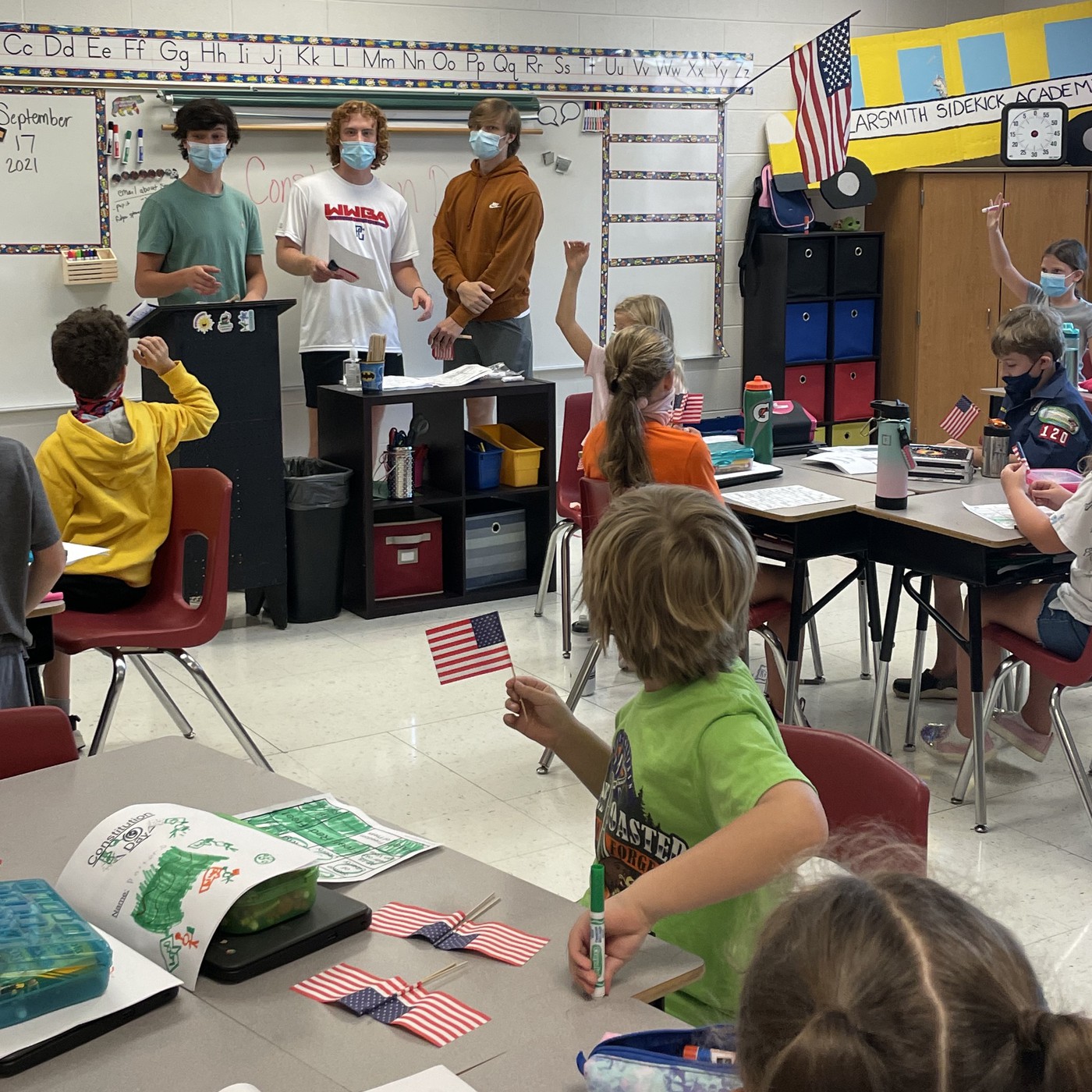 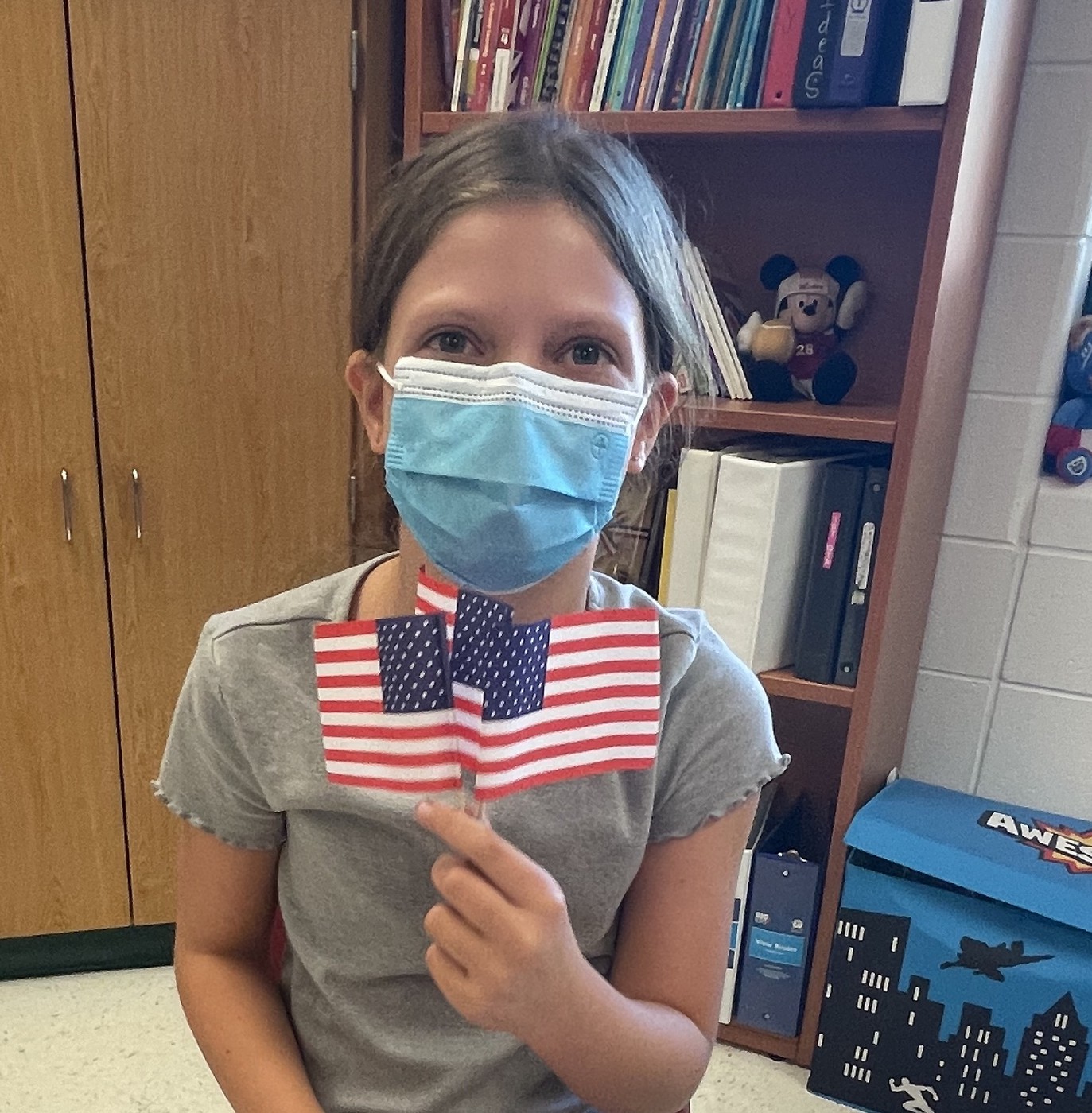 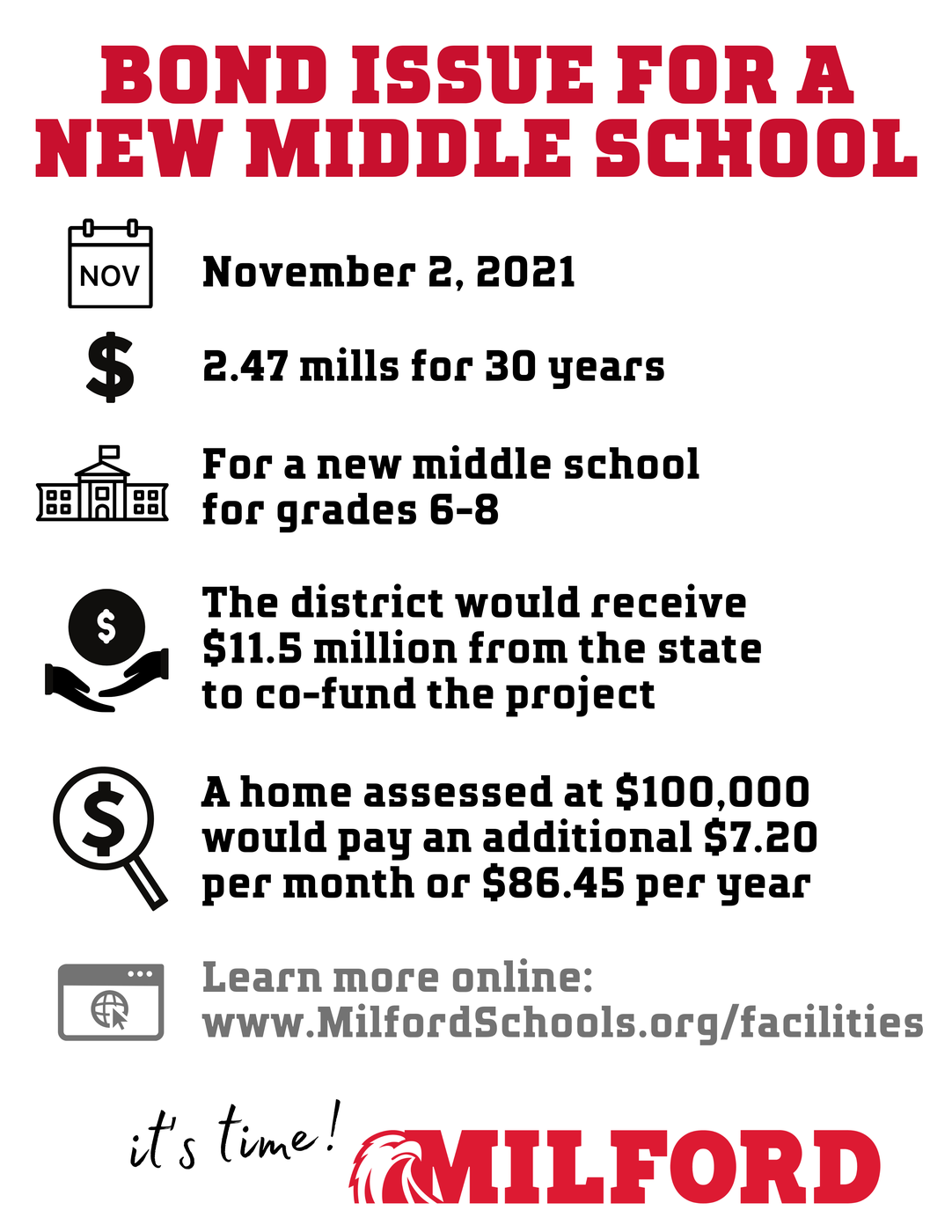 Milford School District has a bond issue on the November 2, 2021 ballot. The 2.47 mill bond issue will build a new middle school for grades 6-8. The district would receive $11.5 million from the state to co-fund the project. Click on the images to make them larger to learn more, and visit our website: www.milfordschools.org/facilities/. 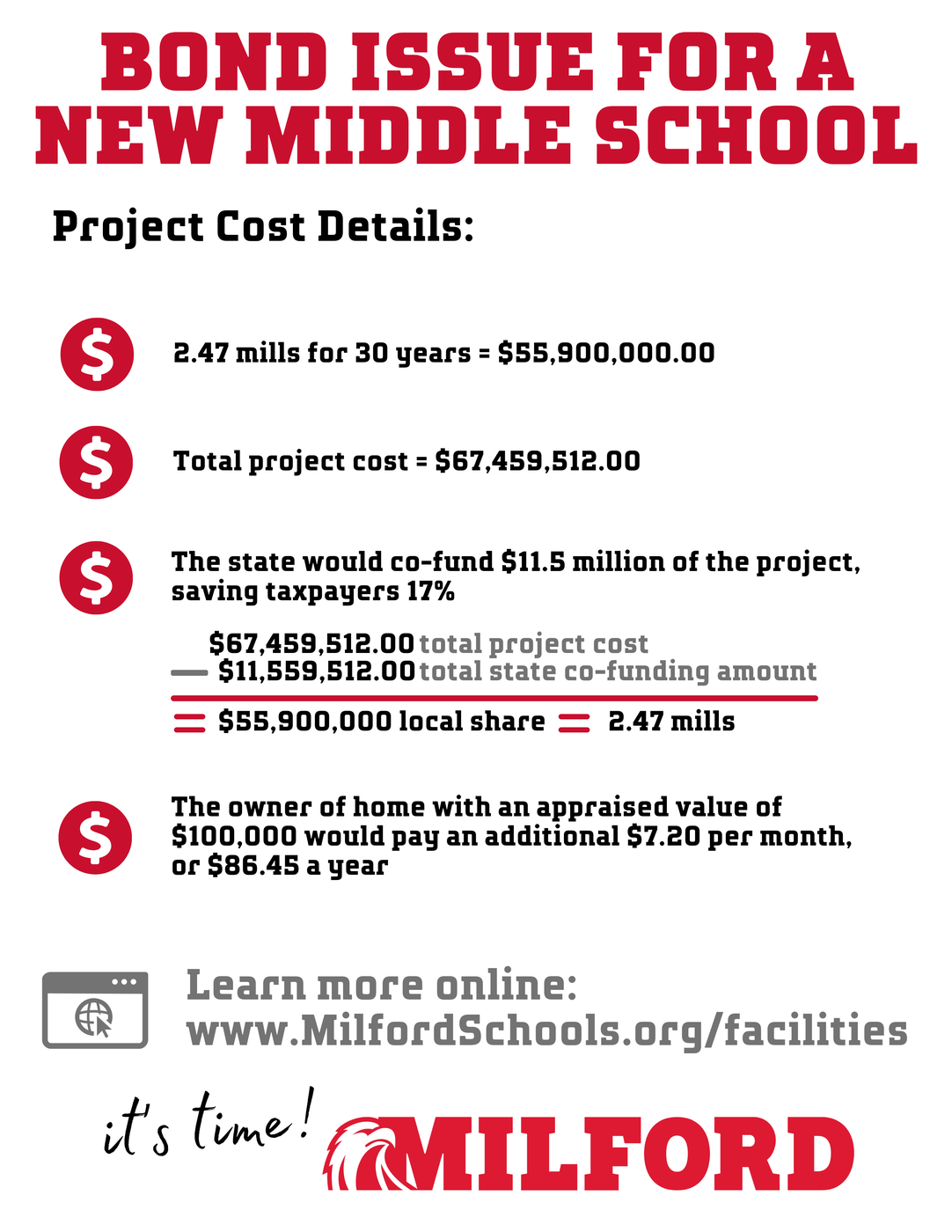 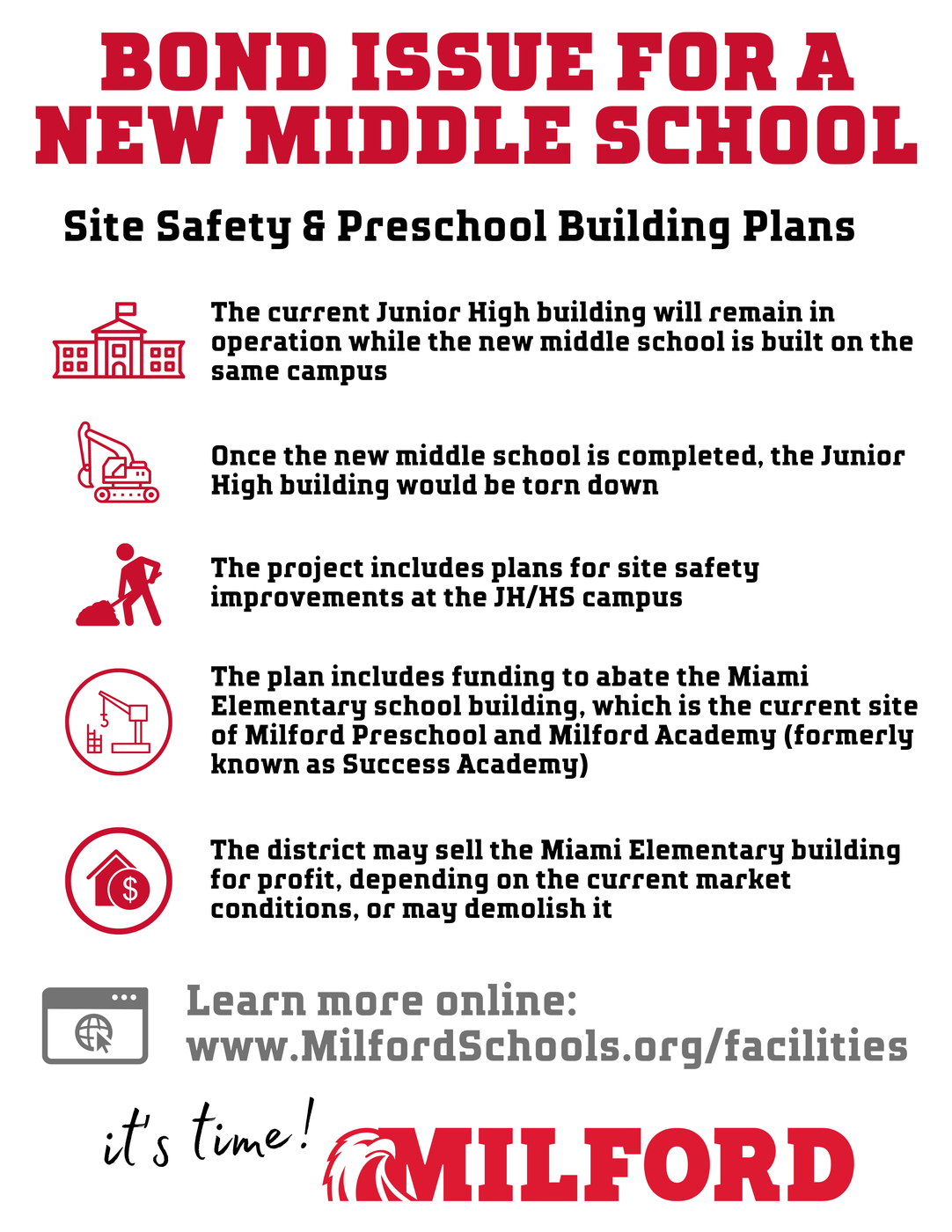 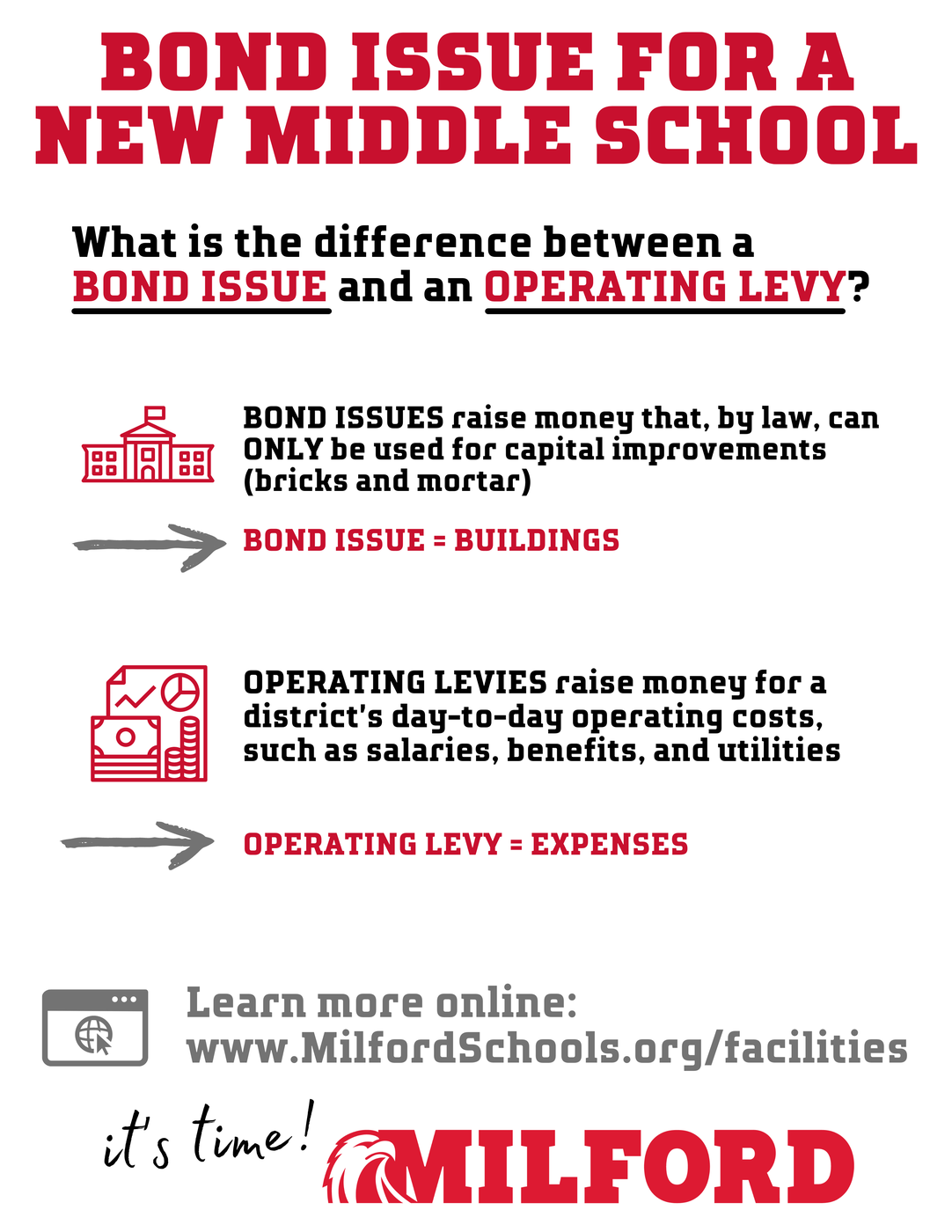 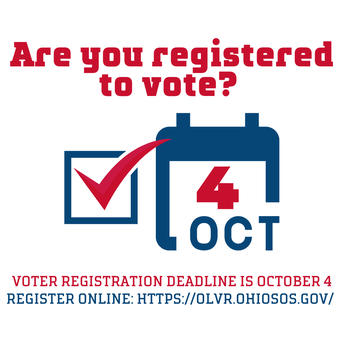 Are you registered to vote? The deadline to register to vote is October 4, 2021. Click here to register online. We also have voter registration cards and information available in each of our school offices. 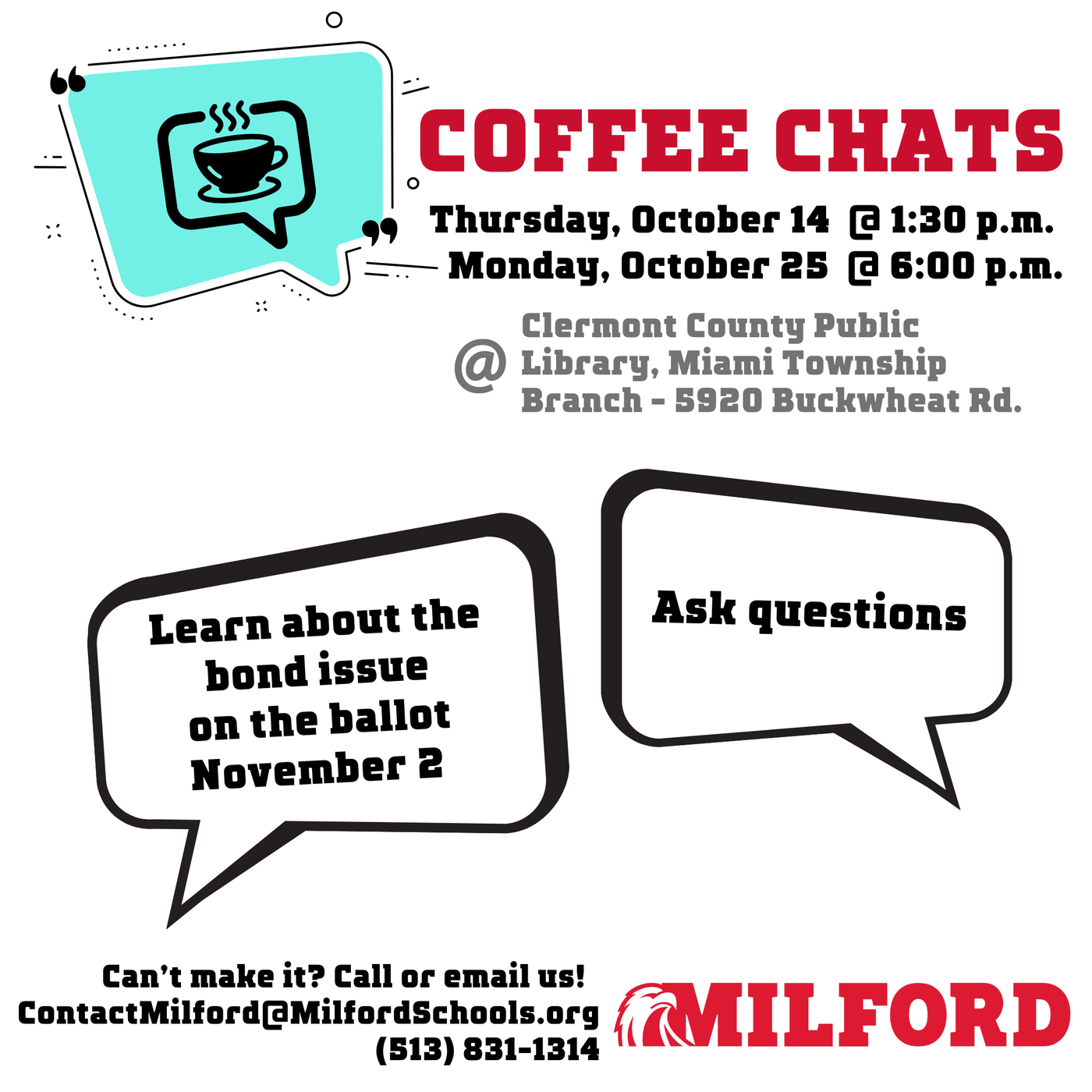 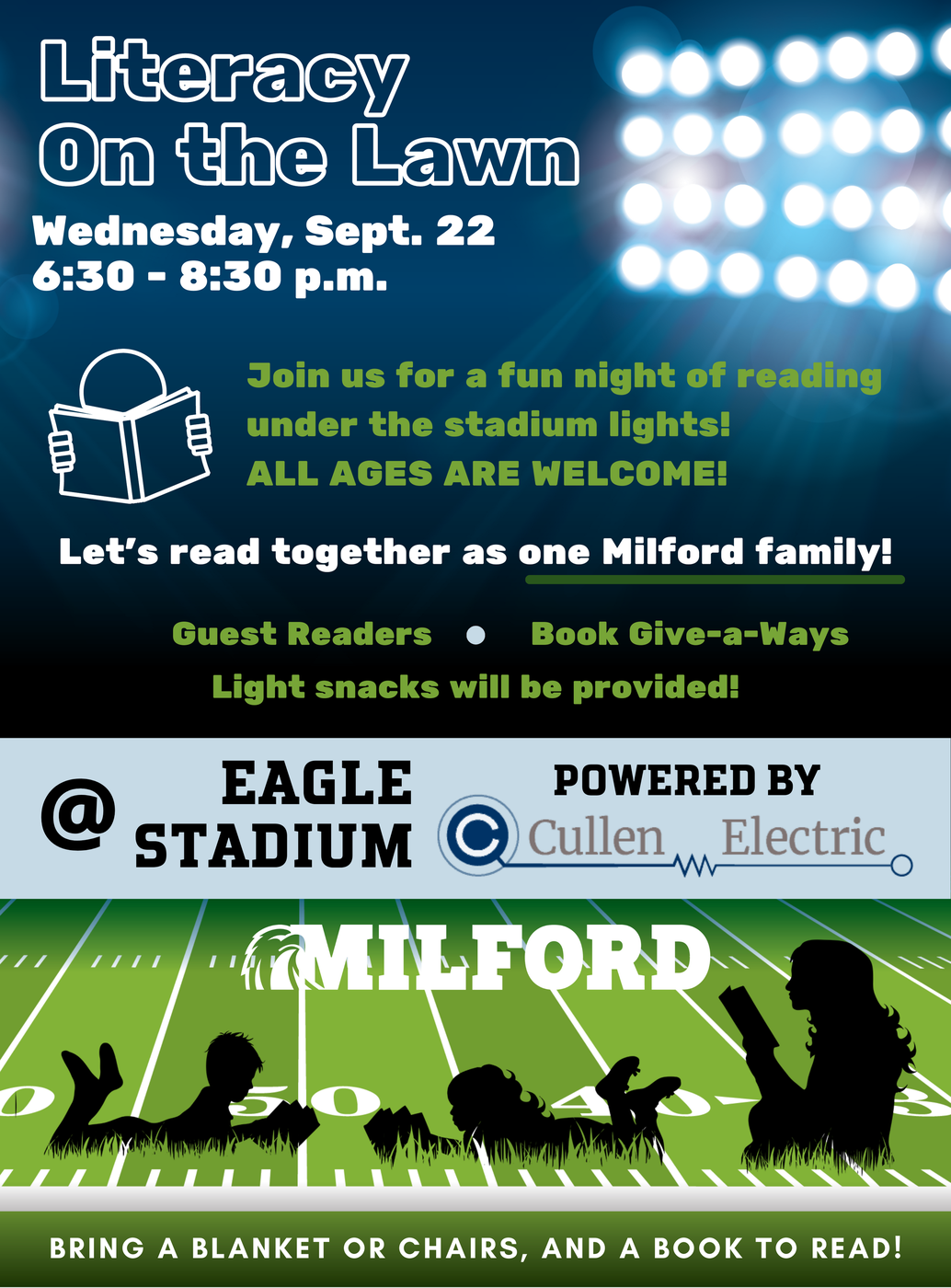 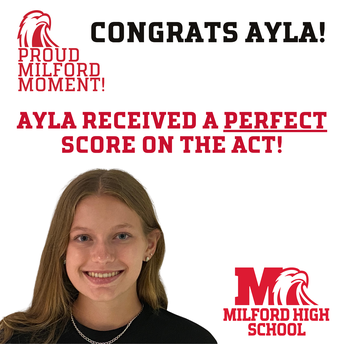 Milford High School Senior Ayla Grabenbauer received a top score of 36 on the ACT test. Congratulations Ayla! Less than 1 percent of students nationwide who take the ACT earn a top score, so this is quite an accomplishment! The ACT consists of tests in English, math, reading, and science, each scored on a scale from 1-36. Students who earn a 36 composite score have likely mastered all of the skills and knowledge they will need to succeed in first-year college course in the core subject area. 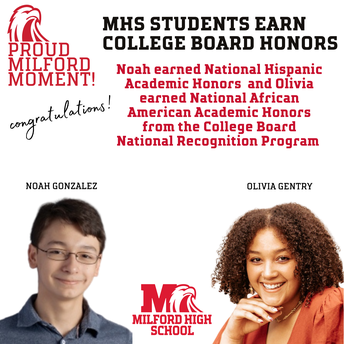 Two Milford High School students have earned academic honors from the College Board National Recognition Programs. These National Recognition Programs grant underrepresented students with academic honors that can be included on college and scholarship applications and connect students with universities across the country, helping them meaningfully connect to colleges and stand out during the admissions process. Congratulations to Olivia Gentry and Noah Gonzalez! 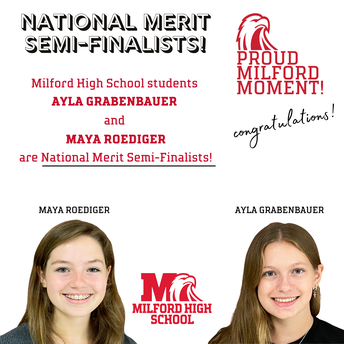 The National Merit Scholarship Program recognizes students who demonstrate exceptional academic ability based on their performance on the PSAT taken during the junior year. These talented students are part of about 16,000 national semifinalists who have an opportunity to continue in the competition for some 7,600 scholarships worth about $33 million.

The students will learn in the spring if they have become a National Merit finalist. To become a finalist, the student and his or her high school must submit a detailed scholarship application, in which they provide information about the semifinalist's academic record, participation in school and community activities, demonstrated leadership abilities, employment and honors and awards received. 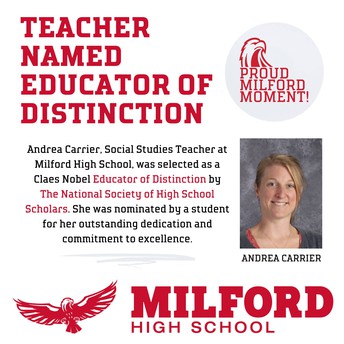 Andrea Carrier, a social studies teacher at Milford High School, was selected as a Claes Nobel Educator of Distinction by The National Society of High School Scholars (NSHSS). A role model to pupils, Ms. Carrier was nominated by a student for her outstanding dedication and commitment to excellence. Congratulations Ms. Carrier!

Haley Christopher, currently a senior at Milford High School, nominated Mrs. Carrier for this award. "Not only is she a fantastic teacher, she was also the first person I felt comfortable with to share how I felt after my dad was involved in an accident," she said. "She made me feel comfortable to share things with her and even made sure to reassure me that the dip in my grades during that time wasn't my fault. The fact that I still earned a 4 on my AP exam, despite the hectic things going on at the time, displays her teaching skills."

Mrs. Carrier was surprised by the award, and very appreciative. "It is humbling to know that students do notice and are still noticing all the work every teacher is putting into this craft even during the pandemic," she said. "The students are why we teach."

Each year, student members of NSHSS are invited to nominate an educator who has made the most significant contribution to their academic career. The honor recognizes exemplary educators whose passion and devotion inspires students to grow and develop as scholars, leaders, and citizens. The NSHSS was formed in 2002 by James W. Lewis and Claes Nobel, senior members of the family who established the Nobel Prizes. The Educator of Distinction Award is named after Claes Nobel. NSHSS has almost 2 million members worldwide. Learn more online: www.nshss.org 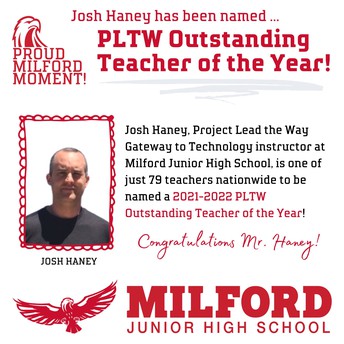 Josh Haney, Project Lead the Way (PLTW) Gateway to Technology instructor at Milford Junior High School, is one of just 79 teachers nationwide to be named a 2021-2022 PLTW Outstanding Teacher of the Year! Congratulations Mr. Haney!

Mr. Haney teaches Gateway to Technology, an engineering program offered by Great Oaks Career Campuses in partnership with Milford Junior High School. He teaches both Design and Modeling and Automation and Robotics classes. He has created a Robotics Club for his students, which is one of the strongest clubs in the region. The Robotics booster club raises $10,000 a year in donations to support the students’ activities.

Mr. Haney is one of two instructors in the Milford program, which is so popular that the Automation & Robotics Class (an 8th grade elective class) is taken by 40% of the class. He has been a Great Oaks Gateway to Technology instructor for 9 years.

As an Outstanding Teacher of the Year, Haney will be asked to share his knowledge with other instructors through blogs, webinars, and interviews. Mr. Haney is also a Master Teacher for Project Lead the Way and trains new teachers in the summer. 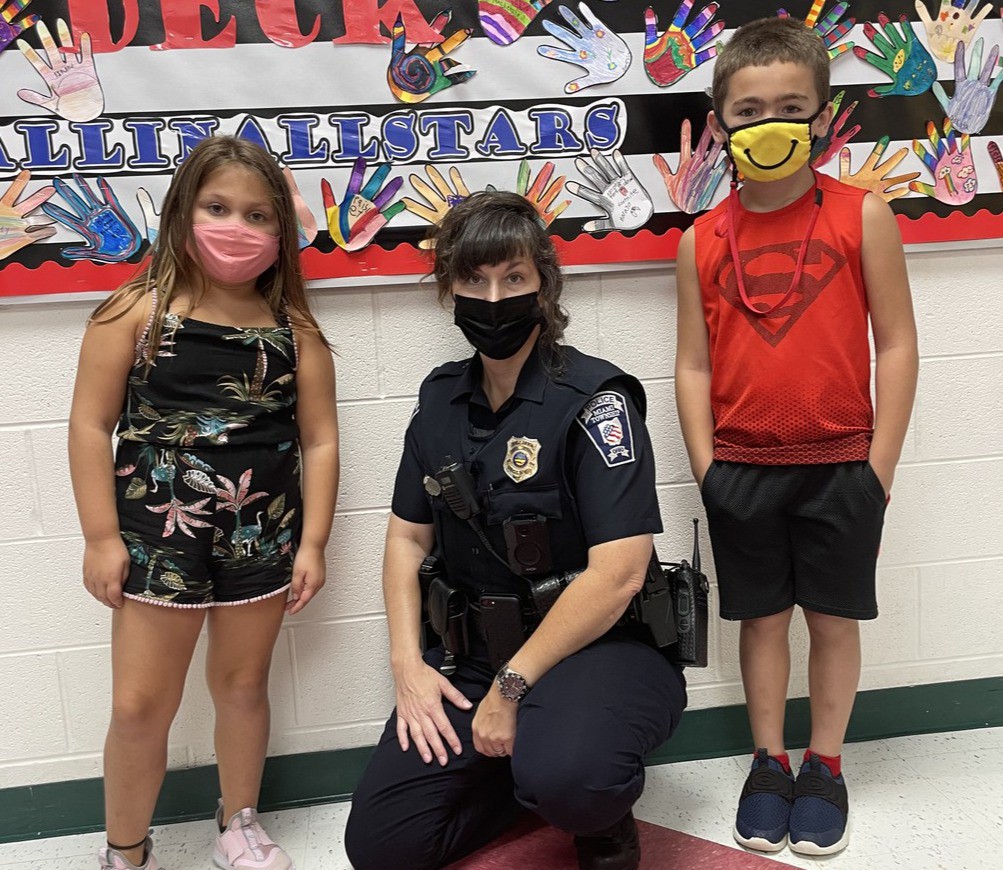 Milford High School is once again hosting family/adult swim sessions. District residents can swim for free. Click here to check out the calendar of open swim dates. A waiver of liability must be signed by all swimmers and by a parent or legal guardian for participants under the age of 18. Any participant under the age of 16 must have a parent or legal guardian present to swim. Contact Lois Leavens if you have any questions at (513) 576-2208 or email her.

Knock, Knock! The traditional Donation Day of knocking on doors in the Milford area for support of the Band Boosters has moved online. Please consider donating online: www.milfordbands.org/donate or you can mail a check to: Milford Band Boosters, P.O. Box 204 Milford, Ohio 45150. 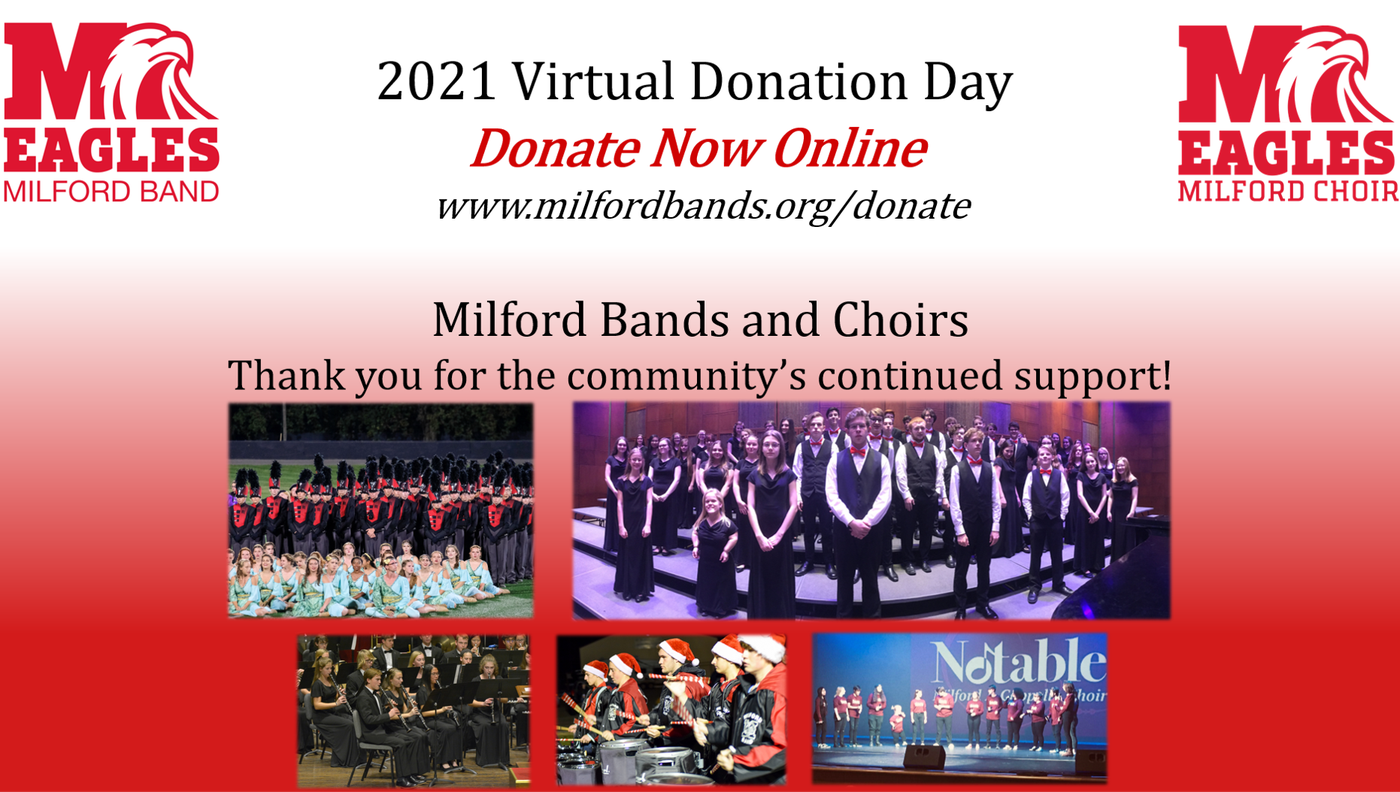 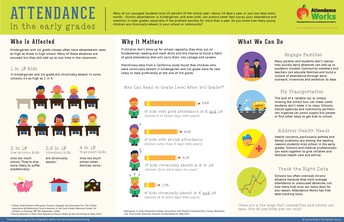 Did you know that children can suffer academically if they miss 10% of the school year? That’s just 18 days total, or about 2 to 3 days a month. That can add up quickly before you know it. As children grow older and become more independent, families play a key role in making sure students get to school safely every day and understand why attendance is important for success in school and in life.

Some absences are unavoidable due to illness or other circumstances - we do not want you to send your child to school if they are ill. We also know that when students miss too much school - regardless of the reason - it can cause them to fall behind academically. Children who are chronically absent in kindergarten and first grade are much less likely to read at grade level by the end of the third grade. By sixth grade, chronic absence is a proven early warning sign for students at risk of dropping out of school. By ninth grade, absences can predict graduation rates.

We urge all of our Milford students to come to school every day, on time so they are successful. 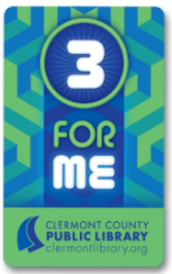 3 For Me Library Card

Studies show that reading and access to books is crucial for success in school. The Clermont County Public Library offers a 3 For Me library card that allows access to three books at a time with no fear of accumulating fines for overdue materials. (No audio-visual items or books written for adults can be checked out on this card.) Apply online 3 For Me! 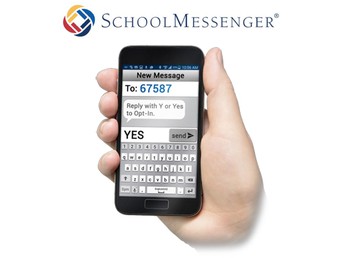 Winter weather will be here before we know it and with it comes the possibility of school closings and delays due to natural elements, hazardous road conditions, or power outages. Student, parent, and staff safety is the most important consideration when inclement weather calls are made.

How are delay and closing notifications made? Parents are notified by the SchoolMessenger notification program - by text, phone call, and/or email. In order to receive text messages, you need to opt in to the system first. To opt-in, text YES to 67587.

If your phone number or email address has changed, be sure to let your child's school know. Closings and delays are also communicated on television, radio, the district website, the district's Facebook page and the district's Twitter feed. 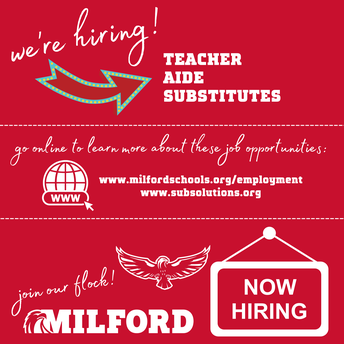