What is the Gilded Age?

Gilded means "covered in gold" and represents this era well in the sense that it was an era of corruption and drastic differences between the wealthy and the working classes, but was covered up by stories of extreme financial success and wealthy living. To an outside nation viewing in, the United States was a land of opportunities with big name Millionaires and Billionaires, such as Cornelius Vanderbilt, John D. Rockefeller, and Andrew Carnegie. Foreign nations also heard about various life changing inventions changing the lives of many, such as Alexander Graham Bell's telephone or Tomas Edison's Incandescent light bulb. 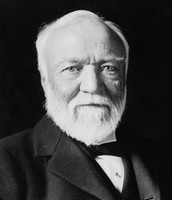 Carnegie was a wealthy businessman who went from being unprosperous in Scotland, to becoming ridiculously wealthy in the United States by starting a vertically integrated company in the steel industry that became a monopoly. At one point, Carnegie owned 90% of the United States steel. 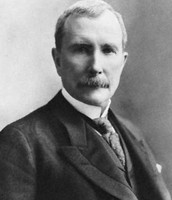 Rockefeller saw potential in the oil industry in his early years and created the Standard Oil Company. By cornering the market with the help of the railroads and buying out or putting competing oil companies out of business, Rockefeller created an oil monopoly. 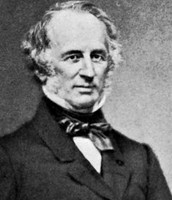 Vanderbilt was a business monster who dominated the railroads in the East by taking over railroad companies and spending little on connecting acquired tracks. His empire extended from about the Appalachian Mountains to the entire Eastern seaboard.

If you lived in the United States, however, this was obviously not true. Sure, the inventions were very beneficial, but mostly to businesses and the wealthy. The wealthy ruled the working class with an iron fist through monopolies and could make the prices of their products whatever they wanted without fear of competition. The mistreated working class worked hard with the "American Dream" motivating them to keep up the good work so that maybe they could become wealthy too, but thanks to the illegal business of the monopolies, the working class was kept in a constant struggle of earning just enough to pay taxes to the very people that were paying them.

After the Civil War, Ulysses S. Grant had become a war hero. He was liked by a good amount of the voting population. In 1868, Ulysses S. Grant decided to run for president. After President Johnson's impeachment scandal, Grant had earned the respect of the radical republicans enough to be voted as their presidential candidate. Grant ran against three others including Horatio Seymore, the democratic presidential nominee. Seymore campaigned vigorously compared to Grant who only really campaigned with the slogan "let there be peace." Since Grant was a war hero, Seymore was viewed as the weaker nominee and was viewed as a "Copperhead" or someone who was against war entirely. Grant began the "bloody shirt" campaign to slander Seymore and the copperheads and declared them as treasonous to the nation ultimately ending their chances at winning over the people. Grant won with 52.7% of the popular vote and 214 of the electoral college's votes. 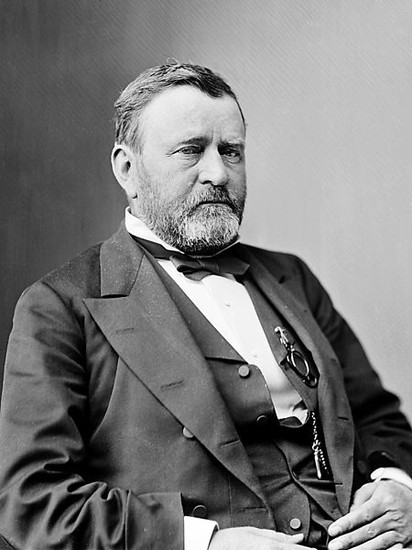 The Gilded Age was an era of political and economical corruption in the United States. Businesses became really effective in making profits legally and also illegally. Even politicians in the Federal level of government were sometimes participating in some of these schemes through things such as bribery. A huge reason for this corruption was also a result of the Spoils System. The Spoils System was a situation where a wealthy person would aid a politician in hopes of helping him win office. In turn, the politician would turn around and appoint that financial aid to a political position of power regardless of wether or not they knew anything about politics. Grant elected friends and family to his administration, and trusted few. He actively partook in the spoils system as well. One of the biggest schemes within the federal level took place in New York where William "Boss" Tweed swindled the out of $200 million dollars. Tweed actively took part in the spoils system and made most of his money through bribery and kick backs. Part of his success was simple campaigning. He promised the immigrant population things like new tenements in return for being reelected. Immigrants constantly reelected him knowing little of his schemes. All they knew was that Tweed promised to create more jobs, and those were in high demand by the public. Cartoonist Thomas Nast was one of the first to notice Tweed and starting drawing political cartoons showcasing what was really going on. Nast went to the New York Times, who were already covering stories about Tweed's unlawful dealings. Drawing pictures, Nast depicted the shady dealings that Tweed was conducting. Eventually, the immigrants began to understand what was going on, and refused to vote for Tweed again, and also complained to police until there was enough evidence of laundering to have Tweed arrested. 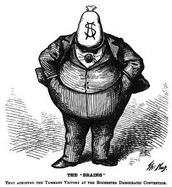 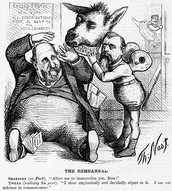 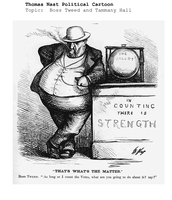 In 1876, Republican candidate Rutherford B. Hayes was running against Democratic candidate Samuel J. Tilden. The compromise of 1877 was a document that settled the highly debated presidential election of 1876. The compromise made Hayes the rightful winner but required him to see that federal troops stationed in South Carolina, Florida, and Louisiana be removed. Grant, just before leaving office, removed the troops from Florida. Hayes removed all the rest and this marked the end of the United States reconstruction era. 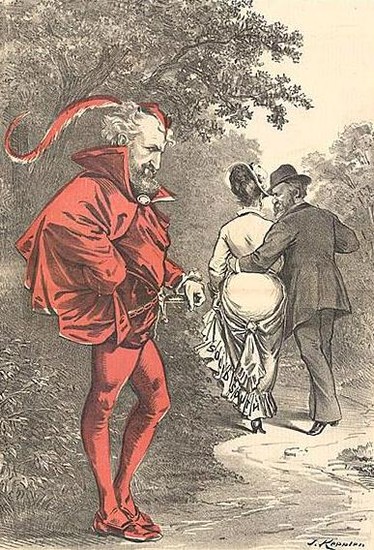 A political cartoon depicts Roscoe Conkling as a character Mephistopheles (the devil) while Rutherford B. Hayes strolls off with the prize of the "Solid South" depicted as a woman. The caption quotes Goethe: "Unto that Power he doth belong Which only doeth Right while ever willing Wrong."

Follow Dylan Mathwig
Contact Dylan Mathwig
Embed code is for website/blog and not email. To embed your newsletter in your email, click HERE to see how or reach out to support@smore.com