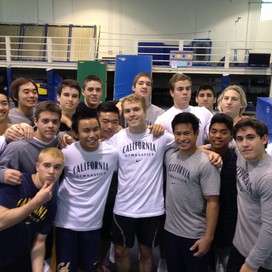 Cal is using Smore newsletters to spread the word online.

Get email updates from Cal:

We continue on the road to the end of the regular season against Stanford three times before returning back to Haas Pavilion for the final two home competitions. This past weekend was the first meeting of the three down in Palo Alto at the Maples Arena. Unlike any previous competitions this season, this weekend’s competition was televised LIVE on the Pac-12 network!

The week leading up to this past weekend brought a lot of changes to the team. I can only express how proud I am of them for training hard, staying focused and not letting the recent changes affect their mentality. I can honestly say, the team out on the floor of Maples was a completely different team then they were at the start of season. They are truly maturing right before our eyes.

better every guy up. The highlight of the event was freshman Takahiro Kawada, debuting

for the first time this season. Although he seemed nervous at first, his excellent swing on

We moved to the floor exercise only 5.55 points behind Stanford. However, we did

start on the PH. The Bears hit nearly all six routines to gain a team score of 74.10, less than 1 point from the Cardinal’s event score. Kevin Wolting hit one of the best sets we’ve seen him do, sticking EVERY pass and a small hop on the dismount. Wolting set a new career high on the event, posting a 15.4 for a 2nd place finish. Senior Jeffrey Langenstein, a veteran on the floor for the Bears, hit a clean routine and posted a 15.25 for 3rd place.

Heading into the next rotation, we held a small lead over the Cardinals. This was clearly the best vault lineup I’ve seen in while. Freshmen Kevin Wolting and Ryan Patterson (a new career best) posted 14.95 with two huge double full vaults and nailing the landing. The Bears finished with a team event total of 74.00.

As we headed over the midpoint of the competition, it seemed like nothing could stop us. However, the fatigue may have hit us on the rings. A few short holds, a missed dismount and some form deductions. Minor fixes. We’ll get it next time. With how rings went, one would expect the moral of the team to die down a little. Not with these guys. The team and our fans really rallied together to bring the energy back up for the remaining two events.

The horizontal bar was next, although it wasn’t our best showing of the event, the

guys stayed on the bar, fighting for every tenth and every landing. I could not have asked

for more from these guys. Wolting and Patterson led the all freshmen line up on the event

Lastly, the parallel bars, an event that has been one of Cal’s strongest in the past few

years. The Bears posted nice clean routines with minor deductions. The highlight routine of the event was sophomore Jonathan Liu, anchor for the Bears. He waited the entire

competition for this one routine. Nerves of steel? Maybe. With a minor trip onto the board

(before his routine even started!), I thought to myself, “oh, NO.” But Liu, a veteran on the

event, gathered his focus and mounted the p-bars with a perfect peach half to handstand. Jon Liu hit every skill that followed and finished with a huge double pike dismount with a step on the landing and setting a new career high of 15.05, besting his previous high from the 2012 NCAAs.

Overall, I am truly impressed at what this team has done this past week. After this weekend, it shows that we area getting back on the right track. Recently, a reoccurring theme that seems to be sticking for us is, well... “Reset”. Whatever happened in the past, we are resetting. Everyday is a new day and every competition is a new competition. We take it day by day and if it doesn’t work out that day. “Reset.” After a well-deserved day off, we have less than a week to prepare for Stanford again. What’s different about this week is that we are mentally prepared for what needs to be done in the gym. We are turning this season around. We are resetting!

It was a pleasure to see all the Cal fans cheering and supporting the team down in Maples Pavilion. You guys are the greatest. We travel to Stanford again this Saturday at Burnham Pavilion and hope to see an even bigger turn out! Competition starts at 7pm so get there early to get good seats!

Thanks again for coming out this past weekend!

Cal vs. Stanford (Next competition)

Cal is using Smore newsletters to spread the word online.