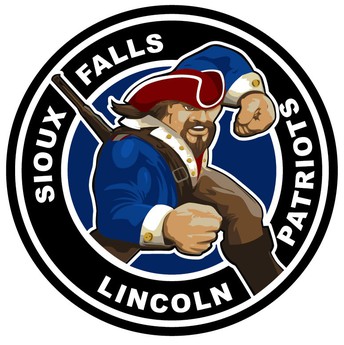 Home of the Patriots 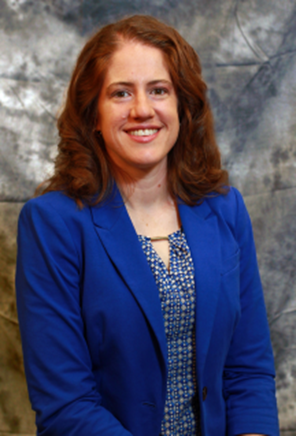 Welcome to May. We are excited about finishing the year strong. There is no rule book written on how to be a high school student during a pandemic, yet the students of LHS have been successful. We are proud of their work during this challenging school year. This is a time to honor the work of the school year and especially the efforts of our graduates. We also have plans in place to make next year even better!

Due to the snow day, our last day of school has changed. Finals will be May 25 and May 26. The schedule for Semester Tests is below: 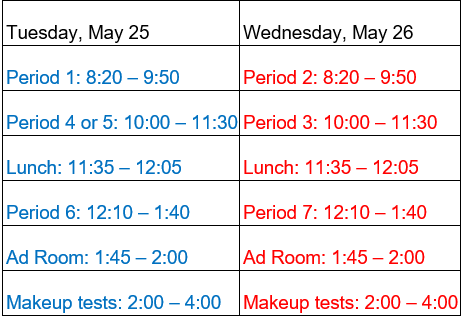 The Lincoln High School graduation ceremonies will be held Sunday, May 30 at the Sioux Falls Arena at 4:00 PM.

Due to COVID-19 protocols, each graduate may invite up to six guests to attend in-person. Tickets will not be required on the day of the event; however, we ask each graduate to ONLY bring six or fewer guests so all students and their families can share in this celebration. All graduation ceremonies will be live streamed so other family members also have an opportunity to celebrate with their graduate. https://www.youtube.com/watch?v=k8t4IcCZbsY

Hand sanitizing stations will be available for students and their families. Masks are expected to be worn throughout the ceremony. We look forward to celebrating this event with your student and family.

We have summer construction projects at LHS. E-wing is receiving an external makeover including a restroom remodel and our orchestra and fitness rooms will be upgraded.

The Lincoln High School Community is looking to update other areas of LHS with your help. Currently, our "wish list" includes:

We are looking for friends and alumni of Lincoln High School to support the projects. If you would like to contribute, you can donate to the "Patriots for Life" at the address below or click on this link: https://checkout.square.site/merchant/ML169S7GAVVHX/checkout/WNNN4JS2RYDHWJ2KCLM372NC

Best of luck to all the students in the last month of school. 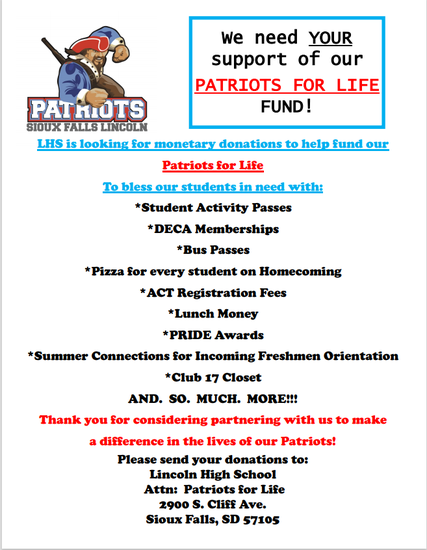 27 - No classes - Teacher Workday - changed due to snow day 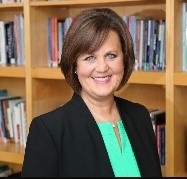 1. relating to the one-hundred-and-fiftieth anniversary of a significant event.

If the Sioux Falls School District was holding a spelling bee in 2021, a good word to

stump even a few of our best spellers might be “sesquicentennial.” A common practice at spelling bees is for the announcer to say the word, define it, and then use it in a sentence. That sentence might be “The Sioux Falls School District is celebrating its sesquicentennial in the 2021-22 school year.”

The Sioux Falls School District was formally established on July 3, 1871. Old records indicate the first school opened in 1870 in the Government Barracks under the direction of teacher Mary A. Benton who trained 17 pupils. However, it was the summer of 1871 when newly elected Minnehaha County Superintendent John Bippus divided the county into seven school districts as one of his first official acts. District #1 was comprised of the entire Sioux Falls township. Still, it took another two years for its first school board to be established with elected members being A. Gale, Director; R.F. Pettigrew, Clerk; and D.S. Goodyear, Treasurer.

It is humbling to think about the exponential value public education has brought to the community through the students who have graduated with a Sioux Falls School District diploma over the past 150 years. We have launched so many successful people who fill every career and job title currently and previously needed and known. We believe this is a feat worth celebrating!

A Planning Committee made up of parents and community members has been meeting since February to determine a fitting theme, and design memorable activities that can be embraced by all stakeholders.

Before school starts again in the fall, we will launch our plan for activities and events to be held throughout the 2021-2022 school year. The theme is “Rooted in Our Past ~ Reaching for Our Future.” The committee is hoping to engage with former staff members, alumni, community members, current parents, students, and employees to highlight all we have achieved in the previous 150 years and to establish new and exciting goals to launch us into the next 150 years. If your path took you through SFSD, dig out your old photos and memorabilia. We are setting up a digital time capsule by decade.

The launch of the District 150th Anniversary celebration will also include the unveiling of new strategic priorities to guide our work as we aspire to be the best school district in the nation. This is a lofty goal, but who better to achieve it than a school district that has 150 years of success in its rearview mirror and one that is committed to continuous improvement for the next century and beyond.

Sesquicentennial isn’t an easy word to say or to spell. But, paraphrasing the great Theodore Roosevelt, we believe nothing worth doing comes easy. We look forward to celebrating this milestone in our history with all of you! 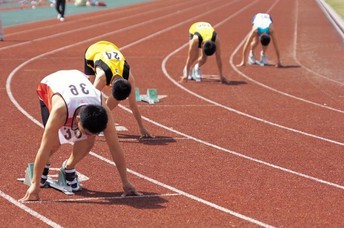 Please note that all other guidelines and protocols are still in place, and masks are still expected at all indoor and outdoor activities. These guidelines and protocols have provided the opportunity for safety at our activities and ultimately support our primary goal of continuing a traditional school setting in the Sioux Falls School District through the end of the school year. 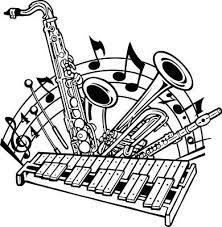 Congratulations to our Lincoln winter guard ladies for experiencing a lot of “Firsts” this year!

They are the FIRST winter guard ever at Lincoln High School and the FIRST guard in the State of South Dakota to make WGI World Semi-Finals...and NOW WORLD FINALS IN THEIR CLASS! Congratulations, ladies! We are so proud of their hard work, representing both our school and community on a national stage.

Congratulations to Karima Mohammed who placed 2nd in the Medical Reading event at the State level for HOSA--Future Health Professionals. She can go on to compete at the National level this summer. Great work, Karima!

Girls State Delegates from Lincoln High School for 2021 are:

Boys State Delegates from Lincoln High School for 2021 are:

The Grand March of Seniors at Lincoln High School

Anyone attending the Grand March is expected to wear a mask.

This event will be live streamed through the Lincoln High School YouTube channel:

The Advanced Placement program requires students to take the examinations on the date and time scheduled. Students are permitted to take alternative-late exams only when: 1. Students are scheduled to take two AP exams for the same time and date, or 2. There is a conflict with a school activity that would take the student out of school. The schedule for the late exams runs from Tuesday, May 18 to Tuesday, May 28. Many of these late tests will be offered only online.

Please email any questions to: adam.morrison@k12.sd.us 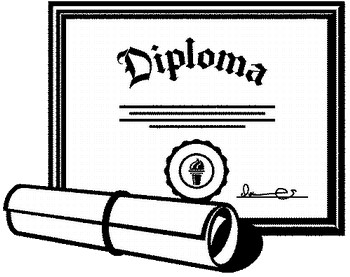 Final transcripts are required by colleges, universities, technical schools, military, cosmetology schools, NCAA, NAIA, South Dakota Opportunity Scholarship, etc. Even though you have been accepted to a post-secondary school, they require a final transcript to be sent from our registrar’s office after your grades have been posted to the transcript.

During the week of April 26th, please check your state email for detailed information and instructions on ordering a final transcript from our Registrar Michelle Peterson. Included in the email will be information about the South Dakota Opportunity Scholarship.

After the email is sent out, information will also be available under the SENIORS then TRANSCRIPT tab on the Lincoln High School Counseling website: https://www.lhscounseling.com/

The deadline to request your final transcript is May 28, 2021.

YOU CAN STILL ORDER YOUR CAP & GOWN IF YOU MISSED THE GROUP ORDER DEADLINE.

FREE Cap, Gown, & Tassel with the purchase of a Graduation Ring/Jewelry during you senior year. Ring sizers are available in the Office if needed.

Click on Button in Video and Order online at sdgradshop.com.

Graduation Information for Class of 2021

The Lincoln High School graduation ceremonies will be held Sunday, May 30 at the Sioux Falls Arena at 4:00 PM.

Due to COVID-19 protocols, each graduate may invite up to six guests to attend in-person. Tickets will not be required on the day of the event; however, we ask each graduate to ONLY bring six or fewer guests so all students and their families can share in this celebration. All graduation ceremonies will be live streamed so other family members also have an opportunity to celebrate with their graduate. https://www.youtube.com/watch?v=k8t4IcCZbsY

Hand sanitizing stations will be available for students and their families. Masks are expected to be worn throughout the ceremony. We look forward to celebrating this event with your student and family.

There will NOT be a photographer this year.

Find all of the information on Class of 2021 party planning activities here. 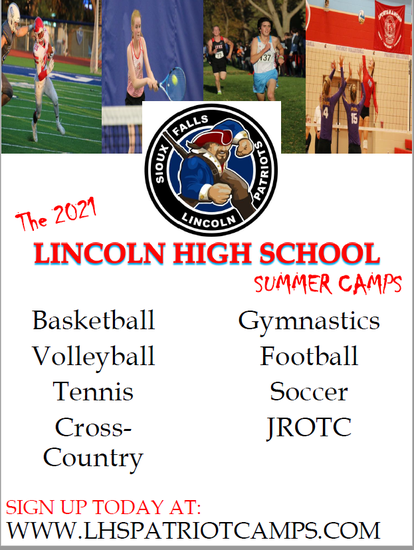 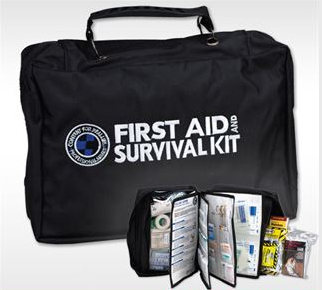 Be Prepared With a First Aid Kit

The LHS chapter of HOSA Future Health Professionals is conducting a fundraiser selling first aid kits. There are several different kinds of kits for the home, car, pets, sports bag, etc. To order and help support our organization, please use the link below to select your kits and pay through a secure site. All kits will be shipped directly to you. Funds will be used to help members pay dues, attend conferences, and purchase materials needed for competitions. We would appreciate your support. Thank you! 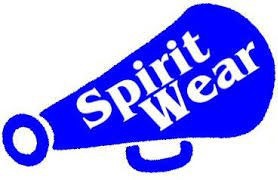 Patriots--check out the fantastic selection of spiritwear at the LHS School Store website: https://mj121.k12.sd.us/LHS%20Student%20Store.html. Please email Mrs. Klaudt or Mr. Jones with orders or questions. 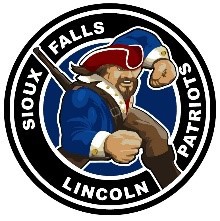 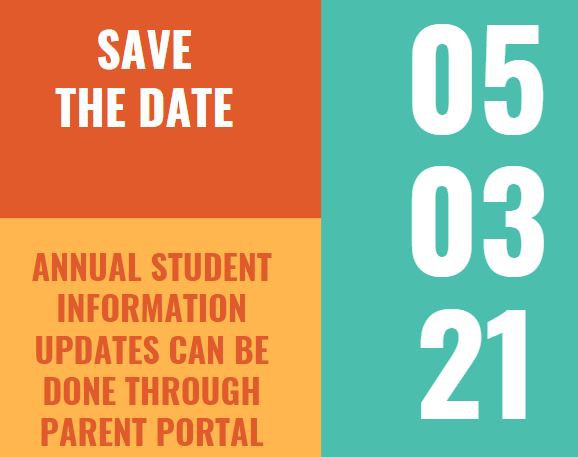 Be informed about your student. 21-22 Annual Update opens May 3. 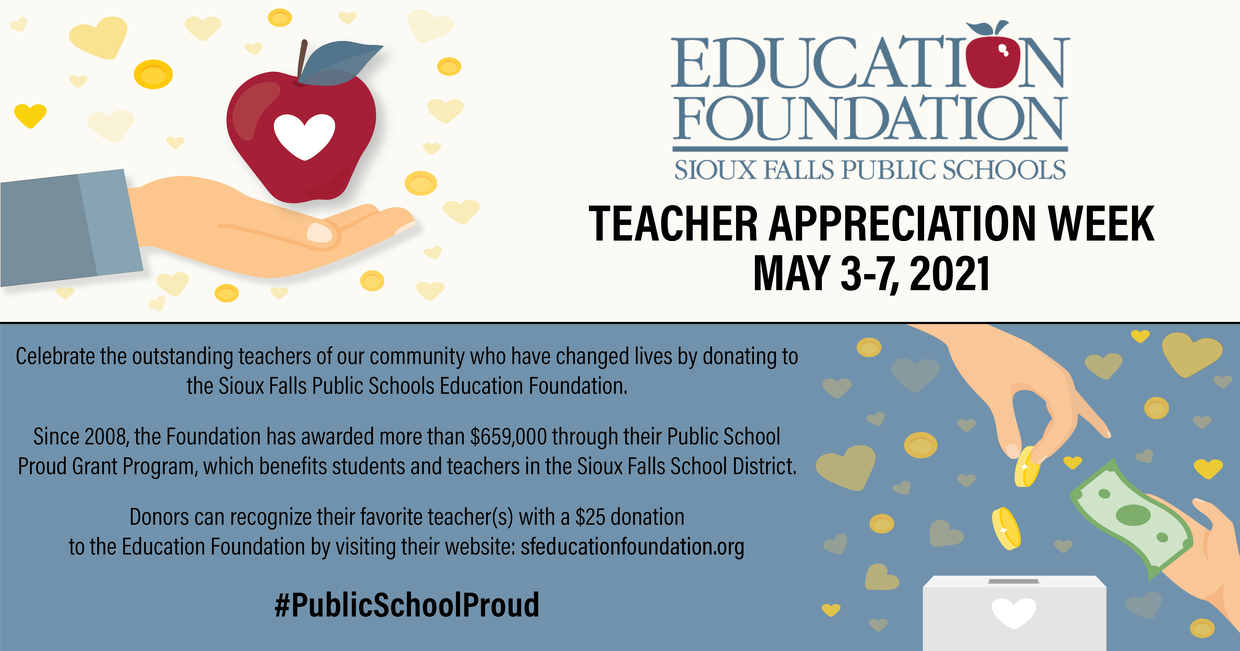 Students enrolled in Accelerated English or AP English courses have required summer reading. The purpose of summer reading is to offer students the opportunity to continue their skills as critical readers and thinkers. Students in Acc. Eng. 1 or Acc. Eng. 2 will receive their assigned summer reading books during the month of May.

Links to summer reading assignments can be found below:

Teacher contact information is included in each of the reading assignments. Further questions can be directed to Sara.Klawonn@k12.sd.us. Have a great summer! 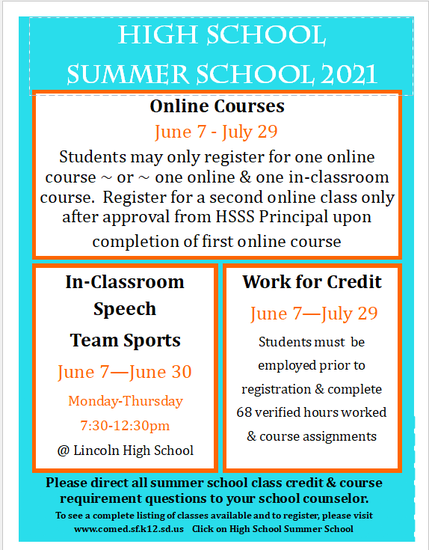 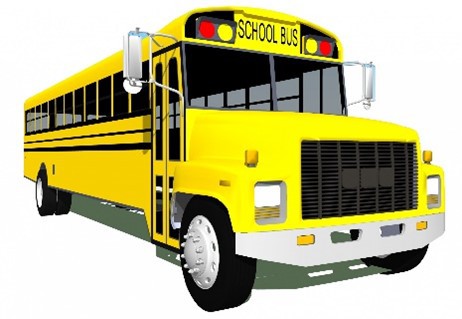 School Bus Inc is looking for part time school bus drivers who will make it a priority to provide students with a safe and enjoyable experience to and from school each day.

· No nights, weekends, or Holidays!

· A work schedule that matches your child’s school schedule!

Why Join Our Team?

· Safety: Our top priority is the safety of all passengers and employees

· Value our Employees: People are the foundation of any great business.

· Customer Focused: SBI will continue to build on the strong partnerships that we have built over the years, based on trust and integrity.

· Able to pass a background check.

· Willing to work a flexible schedule.

Apply today as it will take a minimum of 20 days for licensing and training. 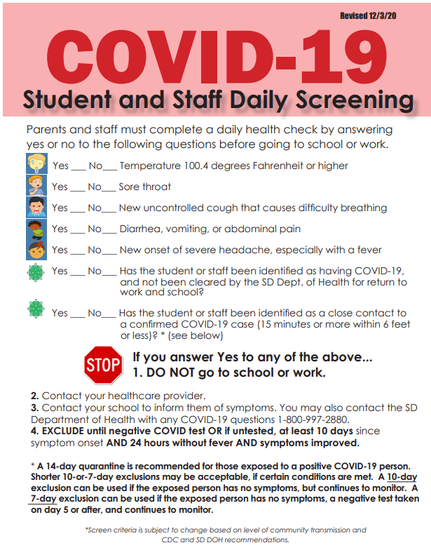 Click this link to view the LHS Activities Calendar.