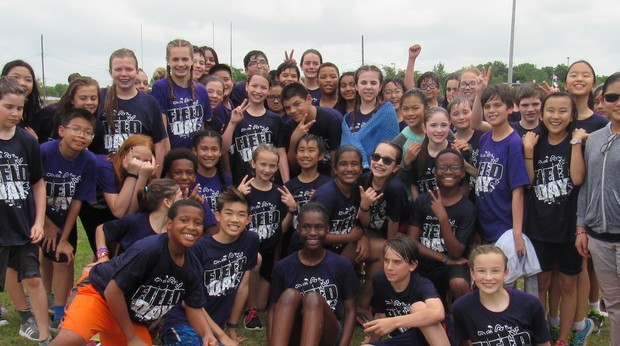 Sablatura students experienced a day filled with fantastic games and activities during Field Day, including snow cones, tug of war, moonwalks, water relays, frisbee toss, picnic style lunch in the classroom, plus an exciting party and dance. Classes were also

allowed to bring games to play during the break.

Nobody left the water relays dry! The two teachers who ran the station made sure of that. During Bucket Head, students competed to fill up a large bucket with water transported from the start. The catch was that the water was carried by a leaking bucket on top of the competitor's head. The teachers also sprayed the waiting teams with hoses, dousing everybody.

The Frisbee Toss comprised of teams divided by homeroom class throwing a frisbee into a hoop. If you missed, you had to throw it again from the place where the disc landed. But beware! The two teachers that also ran the water relays would pick up the frisbee and throw it to the other side of the field if it came close to them.

Tug of War is a classic game that is familiar with many. Homeroom teams were pitted against each other in a battle of strength.After Tug of War, students went to bounce on the inflatables. The moonwalks included a blow-up obstacle course, a slide, and a normal bounce house.

Snow cones were an anticipated part of this year's Field Day. Volunteers prepared the icy treats in a variety of flavors.The dance was also spectacular. A DJ played the latest tunes while the GTAB sold snacks, candy, and drinks to raise money for math club.

Overall, this year's Field Day was an unforgettable experience that no Sablatura student will ever forget. It would not have been possible without the huge help from parent volunteers who willing donated their time to help make this day a success. Thank you for making it possible. Field Day was a ginormous success. Every student can agree that it was a lot of fun. 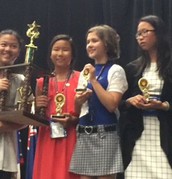 The mission of Future Problem Solving Program International (FPSPI) is "to develop the ability of young people globally to design and promote positive futures through problem solving using critical and creative thinking."

The 2017 FPSPI competition was held at the University of Wisconsin-La Crosse June 7-11. Our Sablatura sixth grade team of four, along with their dedicated sponsor Ms. Sisk, traveled to Wisconsin to show the world just how awesome they are.

Mai, Karen, Kate and Marley placed third out of sixty-three teams from ten countries! This is the highest any Pearland ISD team has placed at a FPSI competition.We are very proud of this Junior team of global issues problem solvers, and can't wait to see where this experience leads them. Look for their names to be in scientific journals across the globe!

These problem solvers have worked together all year researching topics such as Educational Disparities, 3D Printing, and Identity Theft. They apply a six-step problem solving process to their creative problem solving knowledge to address a charge presented in an imagined situation, or Future Scene.

The topic for the International Competition this year was biosecurity. Students were challenged to consider how the development of new technologies might assist in regulating / monitoring biosecurity issues and how countries might cooperate with each other in dealing with cross border contamination. 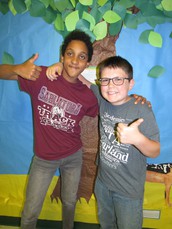 Our students participated in an online Stock Market game where they were given $100,000 in virtual money to invest in the real time stock market. Students learned about stocks, bonds, and diversification. Then they researched companies and worked with their team to decide how to invest their money. At the end of nine weeks, the team with the most growth in their portfolio won the game! With GRIT and perseverance, Wes and Tomiwa ended the game in 1st place out of 263 in the Houston area, 6th, 7th and 8th grade teams. The were honored at a ceremony where they received a plaque and prize money. Thank you Mrs. Cybak for bringing this opportunity to our students! 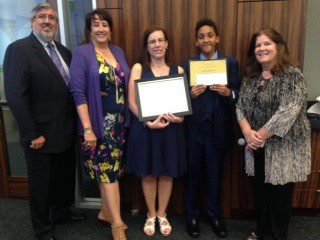 Thank you to all who supported the students as they presented their Texas Performance Standards Projects at the Pearland ISD Education support Center in April. We are proud of their dedication to the challenging task of researching, working together and creating quality final products.

Fifth grade quilts are on display throughout the Pearland community this summer! Some have found summer homes at the Pearland Parks and Recreation Center, Pearland Alliance for Arts & Culture, Farmers Insurance Agency, Gulf Coast Educators FCU, Hometown Bank of Pearland (as seen in photo above) and Central Texas BBQ. Others will be on display in July. Please go by and see them and thank our community friends for supporting GT Academy students.

By: Evan and Katey

Every year, our school represents the cultures and traditions of many diverse countries through the International Festival. Each hallway chooses a continent to research, and after learning the basics of that continent, including its history, work begins on projects related to all the countries it contains. After working for several days, the crafts are displayed for everyone to see.

When the evening of the International Festival came, all the finished artwork was ready

to be shown and placards of information were hung up to teach visitors about food, economics, landmarks, language, music, and interesting facts about each area of the continent. During the festival, people roamed around from country to country learning about all their traditions and customs. There was henna, fishing for ice, dancers and drums! We even collected money to give water to African kids. It is a fun and creative way to learn about different areas around the world!

Our first GTA Game Night was a success! It was a great way to wrap up the year with friends and raise money for our FPS team too. Students played in the gym, challenged each other to board games, and enjoyed Chic-fil-a sandwiches and snacks. Thank you for your support. 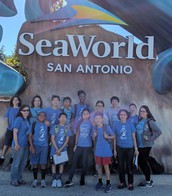 This year, our TMSCA teams did very well at our state meets and had a great time too! They drove down to San Antonio for the competition at the University of Texas at San Antonio. They stayed at a hotel on the first night for a great sleep and headed out to the meet in the morning. West and Sab did great with all making high scores and even placing! Afterwards on the next day, they finished their trip with a fun day at Sea World. It really was a great year for TMSCA! 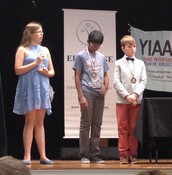 Congratulations to our young inventors! Eight GTA students traveled to the 29th Annual Houston Young Inventor's Showcase Finals at River Oaks Elementary on May 20th to share their inventions with judges. This event demonstrates the innovative thinking and creative ideas of students from around the Greater Houston Area. First place went to Joan for her Fashionista Switch Brush, Nishanth placed second with his Float Pot, and Gus placed third with his Poopinator 3.0 .

The Race Across America Mini Course students went on a field trip to see some of the things we'd learned about. Our field trip to the Houston Museum of Natural Science was about toxic animals . The class we did was called "Toxic Avengers.'' We stared off looking at pictures of wildlife. Then, we went to look at the cabinet of curiosity to see a narwhal tusk, and we freaked Mrs. Medley out when we touched it! They had an empty cabinet you could climb into and pretend you were on exhibit. Six people could fit inside, and it was cramped, but funny. We learned there is not only a black widow spider, but also a brown widow, which is even more deadly. Both types of spiders have white males, and the females eat the males.The Mummies exhibit was the favorite spot of the day for most students. After we hit the Mummies exhibit, we visited the gift shop before we went to the park for a picnic lunch. The students had an amazing time on this trip, and we wish the mini course were longer because we learned a lot!

Many exceptionally talented students performed during the Talent Show in the Nelson Auditorium the last week of school. It was such a treat to see these students shine on stage. From playing the ukulele to an emerging rock band, outstanding voices, karate moves, Bollywood dances and brilliant hands at the piano. they were amazing, and we hope that we get to see more of their talents in the future. 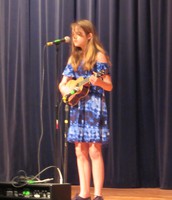 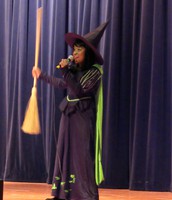 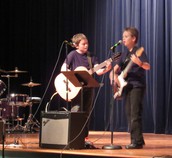 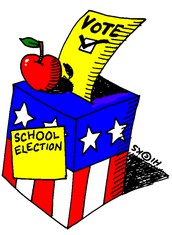 Last Friday, I was voted President on Sablatura's student council. The announcement came on Monday after I gave my speech declaring why I should be elected President. My main aims are community and school giveback, STAAR Test snacks, teacher appreciation, and restroom repairs.

I want to give back to the community by holding a magazine drive for MD Anderson. They are looking for dated magazines to help patients still feel connected with the world outside the hospital. I also wish to perform a pet food donation to animal shelters. I will give back to the school by hosting a mustache day to celebrate the diversity of Sablatura.

Eating makes the brain send out chemicals that make you happy. If we munch on healthy snacks during STAAR, such as pretzels or animal crackers, then we will do better on the test.

Our school's restroom stalls are falling off their hinges, literally. By spending a little bit of money to fix them, it will definitely pay off.

During my speech, I quoted Albert Einstein with, "Leadership is unlocking people's potential to become better." I feel like this quote is fitting for what I am doing. I am simply making Sablatura better one choice at a time.

As the year wraps up, our fabulous GTA teachers have been busy creating exciting and interactive lessons. Miss Hart's students love all the mini labs. From sail boats to catapults, there has been a lot of constructing in her room. The latest simulation in Mrs. Boyd's room took us back in time to the Civil War. Eating hard tack and visiting the surgeon's tent were the favorites of many. With the Australia cookie map lab, sixth grade students learned about the continent, but the best part was eating their edible masterpiece! Mrs. Medley and Mrs. Stenvall combined classes for a Barbie Bungee lab. During the lab students created a company and made a bungee cord for Barbie. Students tested various rubber band amounts to provide a safe but thrilling fall for Barbie.

Mrs. Maricle selected five baseball themed books for fifth grade students to read as part of literature circles. The all-star novels include: Heat, The Boy Who Saved Baseball, Swindle, The Brooklyn Nine, and One Handed Catch. During literature circles, students are divided by book title. They take turns sharing quotes and discussing their favorite parts and analyzing the characters. They also become a team and discuss the elements of the book. To celebrate the end of the baseball book season, all the Purdue students had a kickball tournament. It was a fun way to see which book would win the world series. The Academy students appreciate the hard work the teachers put into creating a superior educational environment for us. 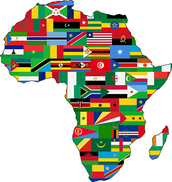 Although the official resource list will not be released until August, you can get a jump start by visiting the library or taking a look at some of these websites. We are looking forward to another great year of Sablatura Quiz Bowl!

2201 N Galveston Ave, Pearland, TX, United States muellers@pearlandisd.org (281)412-1500 pearlandisd.org/domain/420
Embed code is for website/blog and not email. To embed your newsletter in a Mass Notification System, click HERE to see how or reach out to support@smore.com
close
Powered by Smore
Powered by Smore