Shweta is using Smore newsletters to spread the word online.

Get email updates from Shweta:

LOVE LAWS are the principles and standards of society that, however wrong, are so ingrained in the minds of the people that they feel more like laws of nature.

- RELIGION/ INTER-CASTE MARRIAGES: Despite the abolishment of the caste system, some people still restrict marriages between people of different ethnicities. Younger generations marry regardless of how the society would view them. However some people in rural reas, or even the older generations have a mindset that 'nature has created people of different religions for a reason' is still engraved, so they feel it is wrong to go against what nature has made.

- AGE AND MATURITY: LEGALLY, A HINDU BRIDEGROOM SHOULD BE AGED 21 AND BRIDE 18.

- ACCEPTANCE OF LOVE BY FAMILY: When two people who love each other want to get married, the marriage and affection must not only exist between the two of them, but also between the families. However, Severalgirlselope to marrying men of their choice after turning 18.

- FINANCIAL STATUS: Two people cannot marry if the boy has no way of providing a proper lifestyle, education or wealth source.

*Indian couples that have angered their families by pursuing "forbidden" relationships are increasingly seeking refuge in special shelters run by the police:

- In Haryana state, 19-year-old girl, Krishna, lived in a small room at a police barracks. Her family threatened to kill her husband because her family had refused to accept her relationship with Sonu, a 22-year-old barber and they had arranged her marriage with another man, whom she had never met.

Earlier this month, Krishna, daughter of an out-of-work father and a homemaker mother, slipped out of her Saharanpur home on a sultry June night, and took a bus to her boyfriend's house in neighbouring Haryana.

The next morning, they got married at a local temple in Kurukshetra, went to the court and sought police protection. The court ordered the police to give the couple shelter at one of the many homes to protect runaway couples that dot Haryana.

- Relationships in the same village, outside the caste and faith, and within the same 'gotra' (clan on father's side), are forbidden by families and hardline village councils. Kangaroo courts set up the councils often sanction killings of such couples to redeem honour. 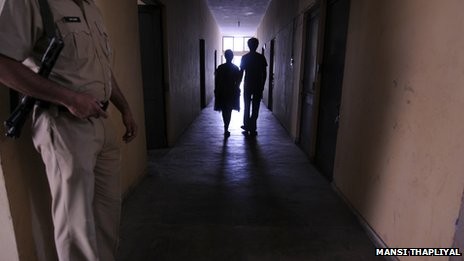 Despite the Odds,love laws are being broken: Love and longing in the towns of India is changing like never before as well

-Shallu, 22, and Subhas, 27, lived 120km (74 miles) apart. Shallu was studying for a degree in computer applications, and Subhas trying to pick up a diploma in marketing when Cupid struck. she sent a friend request to Subhas on Facebook and three months later they met. When her family came to know about the relationship, they took away her phone. They told her that they would get her married to a rich boy.

However, She chose to escape on 22 May. She left home in the morning to sit for an examination where Subhas waited for her after which they got marrried at a local temple.

Shallu's family went to Subhas's house and asked them to "return" their girl. A relative from Her family told Subhas "If she doesn't return home, things can happen,"

-This couple is under police protection as well. Shallu also says she does not understand why her family cannot accept her marriage to the man she loves.

She says "I have saved my father one million rupees ($18,000) which he had stashed away as dowry for my wedding. They should be happy, isn't it?,"

CONNECTION TO THE GOD OF SMALL THINGS

- One important theme of 'The God Of Small Things' is the “Love Laws” and what happens when they are broken.

-As The God of Small Things unravels, Arundhati Roy frequently refers to an idea known as the “Love Laws,” making use of the events in her novel in which these “laws” are obeyed, the occasions upon which they are broken, and pointedly abundant parallelism to critique the disorder, disaster, and death that can be brought on by an excessively rigid social structure.

- Despite the abolishment of certain laws, their principles yet have an impact. The current instances relate to what Arundhati Roy described "Love Laws" as, and that they "lay down who should be loved … And how much".

- Rahel and Estha can’t distinguish their affection from the “love laws” that make Velutha what he is: an untouchable. Roy creates a sense from the children’s affections for him that they do not fully understand the caste system that is so ingrained in their society’s consciousness,or that if they do, then they do not accept it. Because they love Velutha they too are breaking the “Love Laws”. It takes them years to figure out that Velutha’s murder was ultimately the result of Ammu’s breaking the “Love Laws”in the worst way, by having an affair with an untouchable.

- Ammu falls in love with Velutha, an Untouchable, a member of the lowest class. Their relationship is an illegal cross-caste liaison of revolutionary significance within the novel and shapes the struggle that Ammu copes with in her rebellion. They break the love laws.

Shweta is using Smore newsletters to spread the word online.