Get email updates from Del Rosa:

Wanted to connect and say "Hi".

It’s been a few months sense I sent you an update. Lots of wonderful things have been happening. This girl is extremely grateful.

“I will give thanks to you, LORD, with all my heart; I will tell of all YOUR wonderful deeds.”

I am an energetic and joy-filled singer, songwriter and speaker. I enjoy singing and writing lyrics for Christian music in contemporary, urban praise, Gospel and Latin genres. I am a seasoned worship leader and motivational speaker/Bible teacher. I have served in Columbia, S.C. and surrounding areas speaking, singing and leading worship for numerous churches, women’s groups and events. I have performed lead and background vocals on several albums during the last 10 years. I am a former employee of the State of South Carolina where I worked with members of the South Carolina Legislature as an IT professional for many years.

I am available for conferences, meetings and special events. 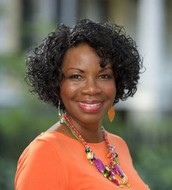 Now I have more time to work on becoming a better pianist, song writer and speaker. Wow! GOD is good.

One of the best things about retirement:

I don't have to rush through my quiet times with GOD. I can take my time and linger in HIS presence. Yes! 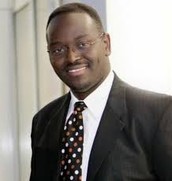 I was granted the exceptional honor of singing my original song: “Emanuel’s Nine” during the Clementa C. Pinckney Portrait Unveiling ceremony. The historic ceremony took place in the South Carolina Senate Chamber located within the State House in Columbia, SC on May 25, 2016. Senator Gerald Malloy (from Darlington) and the other distinguished members of Portrait Committee allowed me to sing my song as a tribute to the beloved state senator and the eight parishioners that were murdered on June 17, 2015. It was amazing to see the portrait unveiled by the two daughters of Senator Pinckney – Eliana and Malana. Media reported that the portrait returned Senator Pinckney’s smile to the South Carolina Senate. Many Pinckney family members shared how much the 'Emanuel Nine' comforted them as I sang. 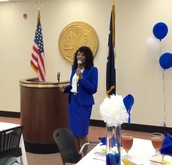 I sang during the 4th Annual Day in Blue Luncheon on May 25, 2016. The South Carolina Democratic Women's Caucus hosted this event. The Luncheon Keynote speaker was: The Honorable Catherine Pugh. Rep. Gilda Cobb-Hunter graciously asked me to sing for the Caucus guests during the luncheon.

The 1st anniversary of the Mother Emanuel murders is Friday, June 17, 2016. A year has passed since our planet was rocked by the tragedy of the nine people killed on that Wednesday evening during a prayer meeting at the historic Emanuel African Methodist Episcopal Church in downtown Charleston, South Carolina. Included in the victims was the senior pastor, S.C. State Senator Clementa C. Pinckney. The other eight victims were: Cynthia Marie Graham Hurd, Susie Jackson, Ethel Lee Lance, Depayne Middleton-Doctor, Tywanza Sanders, Daniel Simmons, Sharonda Coleman-Singleton and Myra Thompson. They became known as 'The Emanuel Nine'.

This upcoming anniversary has made me especially mindful of the families of the Emanuel Nine. I was able to meet and converse with several members of the Pinckney family after the Clementa Pinckney Portrait Unveiling ceremony, on May 25th. They were friendly and so proud of the honor that had just been bestowed upon “Clem” as some of them called Senator Pinckney. I saw them, allow countless strangers – from all races - to talk, greet and hug them. This family was gracious, loving and grateful. I sensed no bitterness within them. There was no air of negativity about them. They were just glad to see their beloved family member so greatly honored by his colleagues in the S.C. General Assembly. I said to myself, “They are living their lives in love and forgiveness.”

Senator Pinckney's beautiful wife, Jennifer, recollected some of the moments of his life – his trial sermon, his various graduations and the birth of his two daughters. I never knew that he played the saxophone until she mentioned it during her speech.. Many of us were holding back tears as she shared about the husband that she so deeply misses.

When Mrs. Pinkney said “Everyone was important to him.” I nodded my head in agreement. Senator Pinckney had a way of making you feel important whenever you were in his company. To me, Senator Pinckney will always be the gentle giant with the booming voice -- caring public servant with a big heart.

This 41-year-old, husband and father of two spent most of his adult life serving others – as pastor of Emanuel A.M.E. in Charleston and as South Carolina Senator. He left a legacy of love and forgiveness. His immediate and Mother Emanuel family have courageously exemplified these valuable virtues. They have shown South Carolina and the world, the power of love and forgiveness. In Senator Pinckney's own words, "Loving God is never separate from loving our brothers and sisters. It's always the same”.

The Power of Forgiveness . .

For if you forgive other people when they sin against you, your heavenly FATHER will also forgive you.

The Greek definition of the word 'forgive' means to send away, separate from, depart from, lay aside, leave alone, omit.

This means that we send away, omit, separate from our thoughts, our hearts and our souls the feelings that occur when others hurt us.

When someone says or does something that hurts us (no matter how deeply) I forgive them. I send away from me their offense. When the offense is sent away - omitted – I don’t retrieve it nor revisit it.

Emotionally, forgiveness may seem impossible. But with GOD, all things are possible. HE gives us the power to send away and separate from those horrific hurts in our lives. Forgiveness is not based on how we feel…it is an act of faith in GOD. When we act in obedience to GOD's word – a miracle happens inside of us. Eventually our feelings catch up with what our faith accomplishes..

This is what the Emanuel Nine families did – they sent away the extreme offense that they suffered and allowed GOD to do a miracle in their lives that touched millions of people world-wide.

Get your copy of 'Emanuel's Nine' today!

Pay securely with a debit or credit card, or PayPal Credit via PayPal.