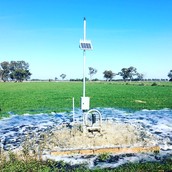 Did you see miss our first newsletter?

What do tsunamis and spinner cuts have in common?

They can be both modelled using new research that the Department of Economic Development, Jobs, Transport and Resources (DEDJTR) are using to improve the precision of border check irrigation.

The Humphris PIT heard about this and the importance of good drainage at the second meeting for the Accelerating Change program. At the farm of Tim and Lyndal Humphris, of Tongala, discussion focused on the use of spinner cuts and how they can reduce the duration of transient waterlogging.

Now spinner cuts may not be the first thing that comes to mind in a project focusing on new technology! They have been around for a long time and have been tried and discarded by many farmers in the region, including Tim and Lyndal. However upgrading of infrastructure meaning faster flows on farm and new science which validates the benefits of them are bringing them back into focus. Paul Price, a member of the Humphris PIT who has been involved with drainage research with Mike Morris and his team at DEDJTR persuaded Tim to have another look at them.

Mike told the group that conventional irrigation bays are inherently imprecise because surface drainage from them is so much slower than the rate of wetting. “Its usual for ‘water off’ to take about ten times longer than ‘water on’ takes”. This means that areas within a bay will be under water for much longer than other areas.

With funding from Dairy Australia, Mike and his team have adapted a computer model originally developed to simulate tsunamis and have used it to simulate the flow of surface water on irrigation bays. What sets this model apart from other irrigation models is its ability to simulate water flows on and off irregular bay surfaces. Early simulations of irrigation water flow compared identical irrigations on three different bay surfaces – firstly a bay with a hypothetical, perfectly smooth surface, then the same bay with its surveyed elevation surface and finally, the surveyed bay surface with shallow spinner cuts installed down the length of the bay.

The results showed that the spinner cut surface reduced the duration of ponding and improved the uniformity of the irrigation when compared to the surveyed surface and, surprisingly, also when compared to the perfectly smooth surface. Spinner cuts not only reduced the total maximum time of ponding but also reduced variation in the duration of ponding on different parts of the bay. This happened because the spinner cuts drained the bay more quickly, so drainage happened at a rate closer to the rate that water was applied. Measurements taken at Paul’s farm this year on an irrigation bay before and after the installation of shallow spinner cuts have confirmed this in the field.

The degree of performance improvement depends on aspects that include the current condition of the bay and pasture, and the bay slope and length. Bays with spinner cuts installed will have increased volumes and rates of runoff, so surface drainage and reuse systems have to be in good condition. With shallow spinner cuts and well timed cut-off, runoff volumes need not be excessive, but will include water previously lost to evaporation and deep drainage.

Reducing the duration of surface water ponding should reduce stress on pastures and discourage shallower roots. Reducing the variation of ponding times within bays could allow more precise scheduling of irrigations, with the potential for greater production per megalitre. While shallow spinner cuts have been shown to improve bay surface drainage and irrigation performance, Mike and his team are now using the model to search for bay surface designs that can deliver these benefits without the cost and inconvenience of installing and maintaining long spinner cuts within bays. Over the next 2 years, Mike’s project team will install two new bay designs developed with the model and test them on dairy farms in the region.

On the Humphris farm, Paul knew that Tim’s old spinner cuts were not executed in a way that Tim would receive full benefit, and low flow rates on the particular part of the farm they were on would mean they would not be as effective. Paul assisted Tim to install shallow spinner cuts according to his practice which looked very different to the old ones Tim had on his farm.

Cameron Smith spoke about the potential economics of spinner cuts. The literature suggests that waterlogging causes penalties of up to 17% in pasture growth. By improving drainage and reducing ponding from 12-14 hours down to 4 hours you can achieve an extra 2.9 t/ha/year which roughly translates into around $33,000 worth of pasture.

Paul Price with a new spinner cut on Tim & Lyndal's. 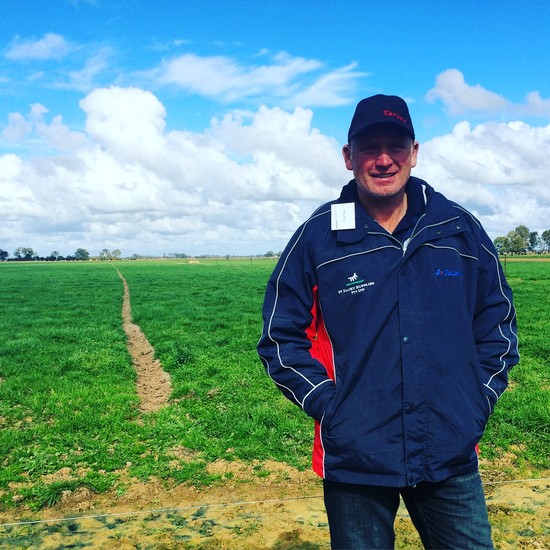 What makes a good modern spinner cut? Some tips from Paul: 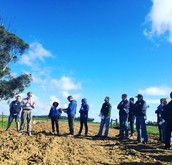 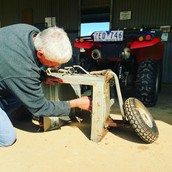 Graeme Phyland from DEDJTR cleaning out the CDax ready to get on farm
Click here to tweet us a photo of your spinner cuts!

We've been busy on farm with our project partners, researchers at DEDJTR, testing and calibrating the pasture measurement gear we will be using as part of the project. One of the tools we are trialling is the Pasture Reader. See below for a YouTube clip of this in action.

The purpose of the monitoring and measurement strategy is to collect data on pasture accumulation and nutritive value as well as water use to assist in the identification on opportunities and challenges, inform management decisions and ground truth estimates and gut feel of our top operators for accuracy.

We have been getting both a CDax and a Pasture Reader calibrated and tested. The CDax is a proven and reliable way of measuring pasture but it's performance is limited in tall crops such as lucerne, as it is a pull behind device an ATV can squash the pasture before it is measured, confusing the results. The Pasture Reader is mounted on the front of an ATV so overcomes this problem. We are running both together at the same time in order to compare the performance of the Pasture Reader against the CDax. We are also calibrating measurement readings through hand cuts. The calibration is the labour intensive component of doing pasture measurements, and by doing them as part of the project it will allow us to compare the effectiveness of other pasture monitoring tools such as drones and satellites as the project progresses.

For the water use component we are extending the use of soil moisture probes on both Partner Farms across different forage types and watering strategies. We are capturing water on bays and investigating ways to measure water off. All data collected throughout each season will be related back to economic implications to gain an understanding of how management decisions are impacting on the whole farm system. In the coming months we will be sharing with you the results from our measurement, which will give you an intimate insight into what is happening on both our Partner Farms as the season progresses.

These are of huge interest to both PIT teams in Accelerating Change. The Humphris PIT had an overview on the benefits of soil moisture probes. The take home message was that the key benefit of probes is to maximise pasture production, not necessarily minimising water use. The PIT team had a lot of discussion around groundtruthing refill points suggested in moisture probe software. The Stewart PIT had an indepth look at probes this week with information from Dale Boyd and Rob O'Connor from DEDJTR. Stay tuned for more detail on what was discussed in our next newsletter.

Not signed up to receive this newsletter? Click here

Accelerating Change is a three-year project that aims to help farmers increase their home-grown pasture production, efficiency of pasture management and utilisation, and efficient use of irrigation water. This project is funded by the Department of Economic Development, Jobs, Transport & Resources and Dairy Australia.