Aryanna is using Smore newsletters to spread the word online.

Get email updates from Aryanna:

Sparta is staying ahead- Reported by Aryanna Williams

Sparta is staying ahead- Reported by Aryanna Williams

Women fearing they are Being Segregated

Sparta's government is ahead of their rivals. It was reported on 321 B.C.E that Sparta's council consisted of elders ONLY so they would have the wisest of wisest choosing and debating their laws. Now people wonder why elders? Well an insider has spoken out and said that the Spartans thought that the elders would have known all the mistakes since they have lived for 60 or more years. CLEVER is all we can say. And we all know men are the more easy-going people when it comes to making decisions and that is why they chose men only for their government. So women do not worry I'm sure you will be able to have your rights set up in a jiff!

The Spartan's strategic form of currency causing less robberies for our economy. 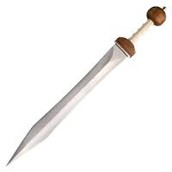 Our Security in The Hands of the Council

The sword our great warriors will have to put aside because of education!

The Slaves are Moving On

Our slaves are carrying our needs in their hands.

Facebook @twitter_handle
All updates come from the latest updates from the citizens and council members
enter a location contact@yourwebsite.com 2065553421 yourwebsite.com

Spartan soldiers have been reported to function less when having to deduct time from their training for education. A soldier quoted to be "Slazer" explained that himself and his buds in the military want to be able to have the proper training when preparing to go into war so they can go back home and see their wife and kids but instead they have to study for something they do not even care about. So we all have to wait and see what the council wants to decide about this developing story.

Slaves are Speaking Out

The slaves are now protesting against working for the Spartan figures because of the brutal treatment they have been receiving. The Spartan military and the slaves known as,"helots" are planning a war to determine who gets to make the decision for their rights! A local slave master has spoken out about how he does not mind giving the helots more rights because he needs someone to prepare and plant the food him and his family depends on. The government have yet to respond to the angry crowd of people waiting outside of their temple.

The council has now officially decided on using iron bars for currency instead of their rival, Athens, weightless coins which are easy to manipulate and steal! Not long ago a homeless man had tried to steal bars from a local Spartan official that was headed to an assembly gathering BUT he did not make it that far with the heavy iron in the sack unlike when the council had decided to use silver 1-inch coins

Aryanna is using Smore newsletters to spread the word online.