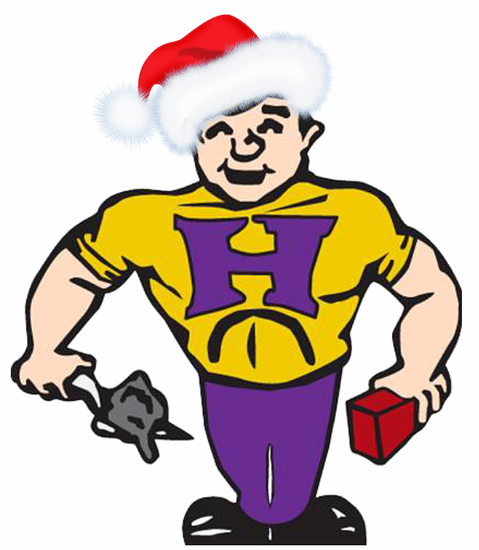 As classes wrapped up this week for winter break, Santa's elves were no doubt wrapping things up as well getting ready for Christmas! The Brickies were busy celebrating SENIORS, hosting super duals, hooping it up ... throw in a diving invite & a partridge in a pear tree and we must be close to Christmas! Across the board, "the stars are brightly shining" as our student-athletes continue to represent us extremely well with their WORK WORK WORK ETHIC and ATTITUDE. No need to go looking under the tree or in your stocking to find BRICKIE PRIDE this year ... our kids and coaches wear it on their sleeves every night!

Although it's been said ... many times, many ways ... here's how wrestlers would say it:

I don't know about you, but all I want for Christmas ... is BricksCenter! 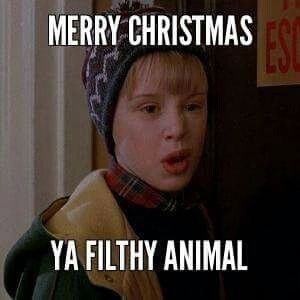 Did you know that the Brickies had TWWWOOOOOOOO events to compete in this week? Well, they looked IMPRESSIVE in both!!

On Wednesday night, Hobart hosted Andrean in their 3rd NCC contest of the season. The match was also SENIOR NIGHT for the Brickies. Wrestlers Bobby Babcock, Conner Johnson, Cristian Padilla, Jaden Skimehorn, and Tyler Turley ... along with managers Maddy Slicker and Allissa Velasquez ... were honored with their families in a short ceremony before the 1st match of the night. The goals for the evening were to celebrate our seniors AND to watch the Brickies WIN! Guess what ... we were TWWWOOOOOOO for TWWWOOOOOOO!! Hobart DOMINATED - wait, dominate isn't a strong enough word - ANNIHILATED the NINERS by the final score of 78-3. Yes, that was really the score ... Hobart won by 75 points ... WOW!!! All in all, it was a GREAT NIGHT to be a Brickie and Hobart improved to 3-0 in Northwest Crossroads Conference action!

Saturday, the Brickies hosted their annual SUPER DUALS meet. This year's field featured some heavy hitters with state ranked #5 (#5 in Class 4A) Chesterton, Lake Central, Goshen, Highland, Hammond Gavit, & Knox! #18-ranked (#5 in Class 3A) Hobart faced Lake Central, Goshen, and Highland ... going 3-0 ... and then faced Chesterton (4-0 on the day) for the CHAMPIONSHIP! I can't think of a better way to finish an exciting day of wrestling than to watch TWWWOOOOOOOO TOP 20 teams battle it out for a title! The Trojans won the 1st 4 matches ... then it was the Brickies turn in taking the next TWWWOOOOOOOO! Both teams wrestled TOUGH, but ultimately Chesterton was too much for our boys on this day and the Trojans left town with the team title. Still, the challenge of squaring off against one of the state's best will give our boys great experience as they prepare to compete at IHSWCA TEAM STATE!

The Brickies will head to Munster on Tuesday for an NCC clash with the Mustangs and then travel to the IHSWCA TEAM STATE competition held @ Franklin Community High School after Christmas to challenge the best (... I say the best!) competition from all over Indiana in search of a Class 3A IHSWCA STATE TITLE! GOOD LUCK BOYS!! 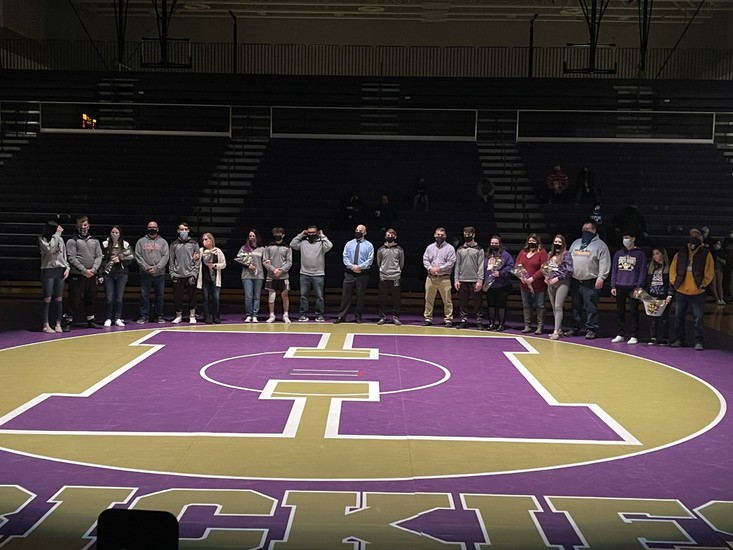 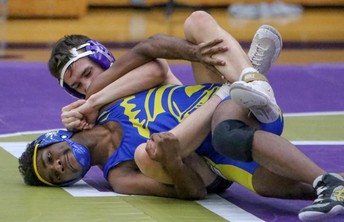 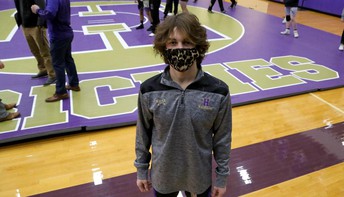 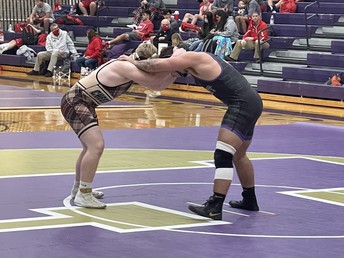 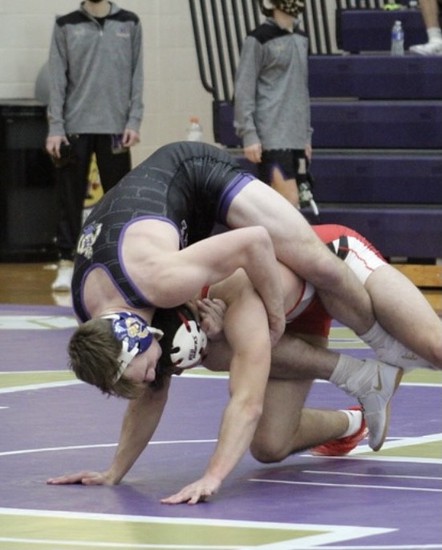 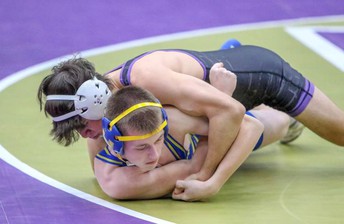 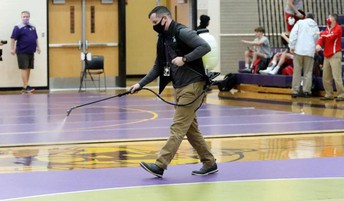 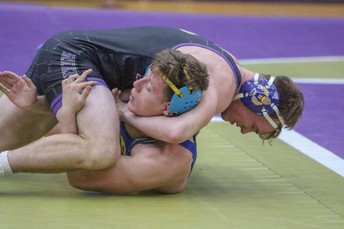 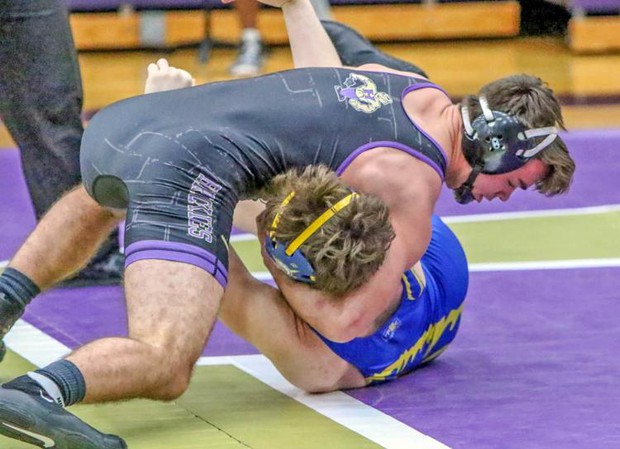 Check out what the NWI Times had to say about SUPER DUALS! 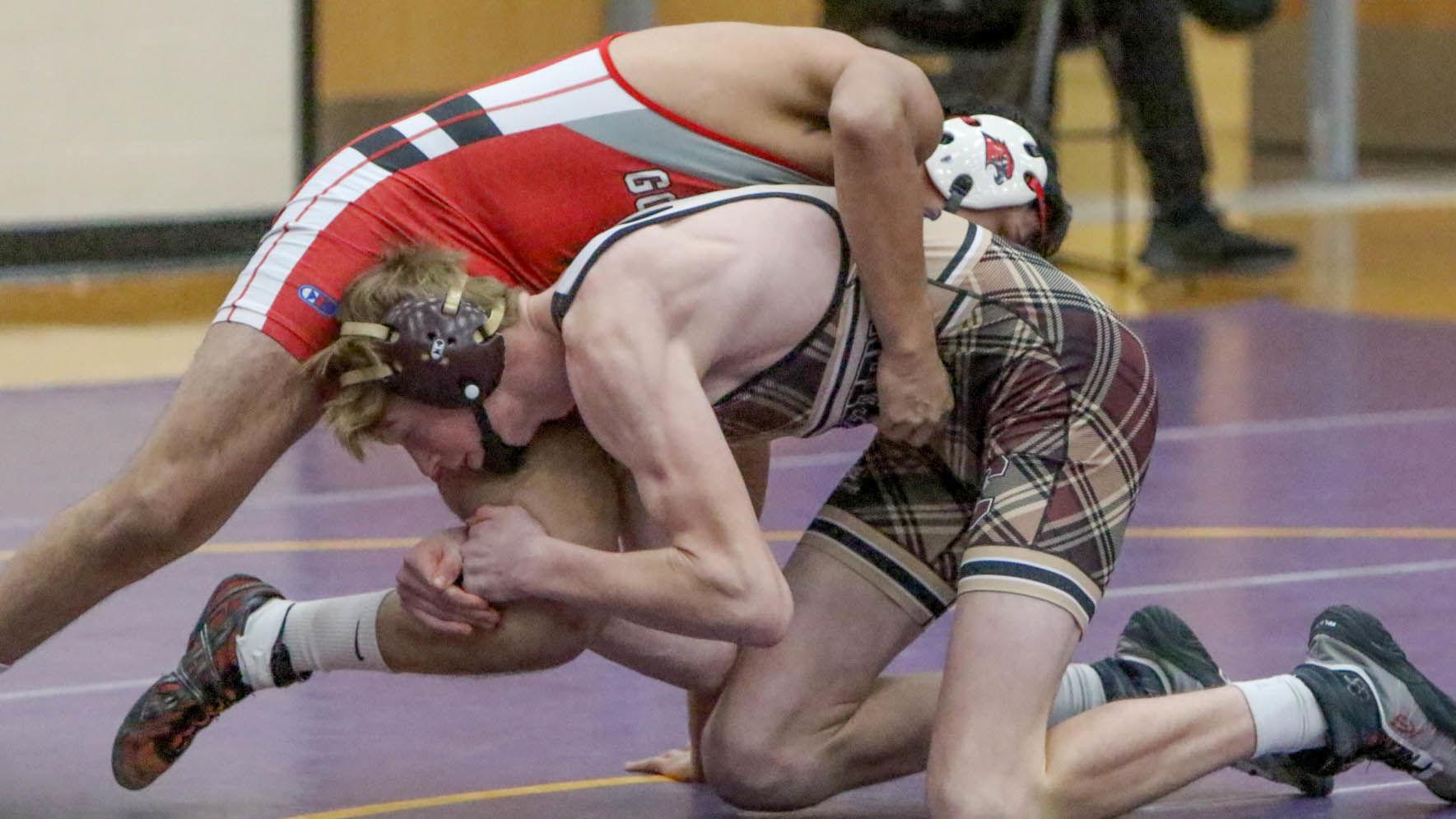 www.nwitimes.com
“I knew going into that match it would be a tough one,” Bolin said. “I kept working, and it just happened.”

This week was literally a SPLASH for the Brickie swim & dive teams!

Thursday, the Brickies were supposed to host Hammond Morton for SENIOR NIGHT, but the Governors were impeached by COVID and had to sit this one out. No matter ... Hobart celebrated SENIOR NIGHT anyway with an AMAZING ceremony and video presentation!! Chad Tomaga, Alivia Ahner, Julie Hunt, Delaney O'Brien, Ana Tepavcevich and Emma Wright enjoyed their moment in the sun and then you could say "the swim caps came off"! The next 45 minutes featured synchronized diving, chicken races in the water, and even a 50-yd corkscrew!! The best part might've been when Tomaga gently nudged Coach Ken into the pool - a SENIOR NIGHT tradition within the swim & dive family :)

On Saturday, 4 of our divers made the trek east to Warsaw to compete in an 11-dive meet ... an important step in preparing for post season GLORY! Against some of the best competition they've seen this year, ALL 4 placed in the TOP 8 at the event!! Juniors Ethan Ferba & Hayden Maggio, along with classmate Sydney Arias and senior Alivia Ahner showed off their LICENSE TO DIVE and brought home some hardware! CONGRATULATIONS BRICKIES!!

Both the boys & girls will use the winter break to catch up on training while preparing for the stretch run in January. Next up for Hobart is KV & Lowell on Tuesday, January 5th. 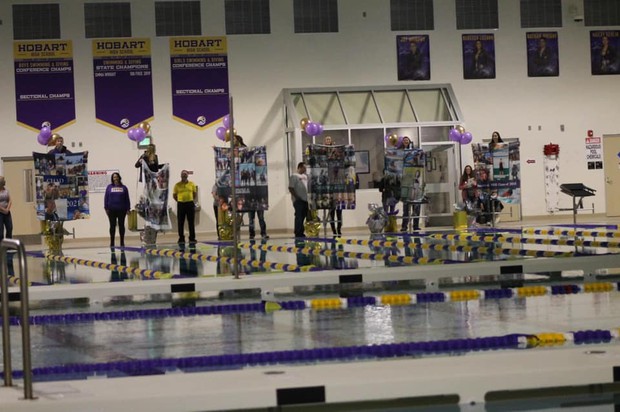 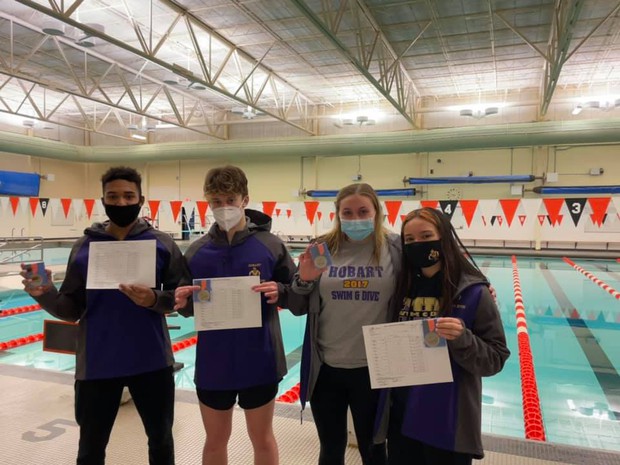 The Lady Brickies were originally scheduled for two games this week ... a Tuesday night tilt over @ LaCrosse and a Saturday night PRIMETIME match-up with area top 10 team Andrean. Unfortunately, the Lady Tigers were caged up by COVID and had to cancel Tuesday's contest, which meant our girls were like the University of Kentucky's men's basketball program ... 1 & Done ... this week!

That "1" game was a DOOZY as our girls faced undefeated and Top 10 ranked Andrean over on 5959 Broadway. Anytime these two schools get together ... no matter what sport ... you know it's going to be fun and Hobart was definitely looking to unwrap an UPSET a few days before Christmas! Thanks to some HOT shooting in the first quarter, Andrean jumped out to an early 15-4 lead. The Lady Brickies BATTLED BACK and played nearly even with the '9ers in the 2nd & 3rd quarters hoping to make a run and possibly pull off a STUNNER! Sadly, it was Andrean who experienced the offensive explosion over the last 8 minutes and sent our girls home with a lump of coal in their stocking and a 72-38 loss. It was a TOUGH night for Hobart, but one that should give our girls some confidence that we can play with the best ... one that our girls can use to improve as we head into the 2nd half of the season. Clearly, when the Lady Brickies PLAY HARD and PLAY TOGETHER, anything can happen! Sophomore Asia Donald led the Lady Brickies with 17 points and senior teammates Lexi Williams and Ariah Rivera each added 7 in the loss.

Hobart is 4-5 nearing the halfway point and 0-3 in NCC play. Next up is SENIOR NIGHT on Monday against neighborhood rival River Forest ... and after Christmas, the 1st Annual Hobart Holiday Tournament! GOOD LUCK LADIES!! 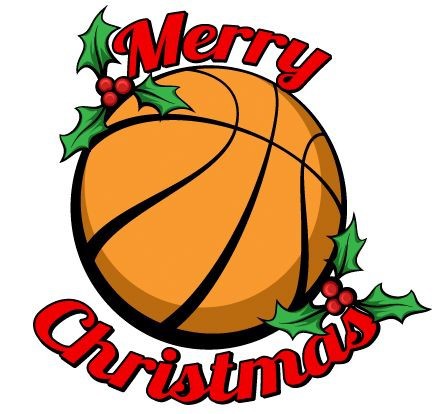 It was an EXCITING week @ HHS for seniors signing their letter of intent to continue their academic and athletic careers at the NEXT LEVEL! If you recall, a few weeks back, senior swimmer Emma "Doin' it" Wright signed at the University of Houston. This week, a few more Brickies got their Christmas wish and signed on the dotted line!

Zach "Highlight Zone" Vode will be continuing his decorated high school career on the gridiron at Western Michigan University! The Broncos compete at the NCAA Division 1 level FBS (Football Bowl Subdivision) and are members of the MAC (Mid-American Conference). Zach was a key cog in the Brickies 2020 run to the State Finals playing offense, defense AND special teams! For his efforts, he earned All-Conference, All-Area, and All-State recognition including IFCA TOP 50 in Indiana!

Bobby "The Beast" Babcock will be continuing his decorated high school career on the gridiron at Illinois State University! The Redbirds compete at the NCAA Division 1 level FCS (Football Championship Subdivision) and are members of the MVC (Missouri Valley Conference). Bobby was also a difference maker for the Brickies State Finalist team this fall ... wreaking havoc on opposing offenses with over half of his tackles this season occuring in the opponent backfield! Bobby is a 2-time IFCA TOP 50 award winner and like Zach, earned All-Conference, All-Area, and All-State!

Mark "Quiet Man" Perez will be continuing his career at Indiana University Northwest! The Redhawks compete at the NAIA level and are members of the CCAC (Chicagoland Collegiate Athletic Conference). Mark, who speaks softly and RUNS REALLY FAST, was a regional qualifier in 2020 and one of the most improved Brickies over the last two years!

CONGRATULATIONS GUYS! WE ARE VERY PROUD OF YOU!!

Stay tuned for more updates ... the Brickies have quite a few student athletes making future plans to keep playing! 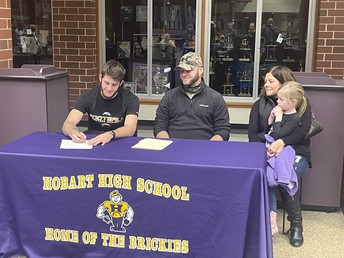 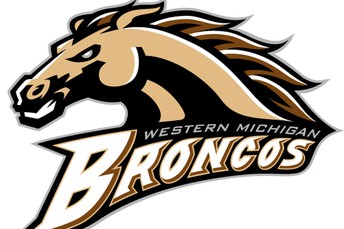 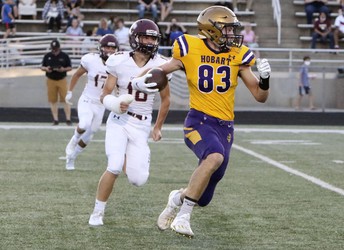 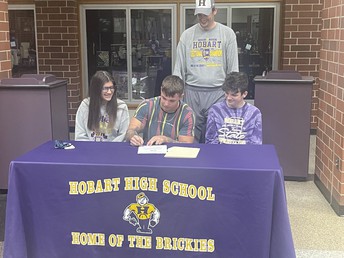 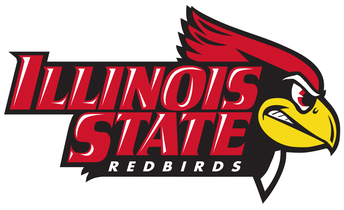 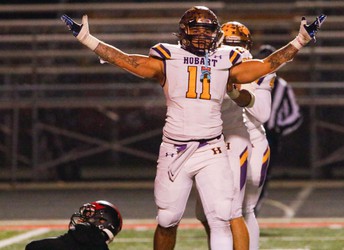 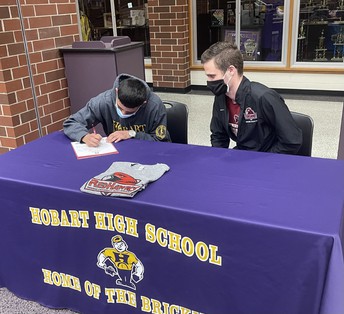 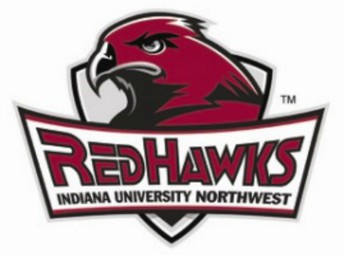 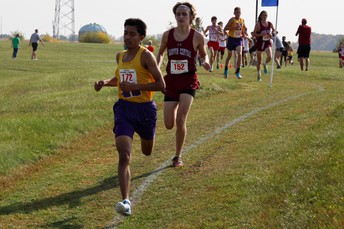 Speaking of the NEXT LEVEL, 2017 HHS graduate Aleks Novakovich is hooping things up at the University of Delaware! Aleks ... an All-Conference performer and Indiana Elite Class 4A North All-Star while at Hobart ... is a redshirt sophomore for the Fightin' Blue Hens and has earned a spot in their starting 5! Delaware competes at the NCAA Division 1 level and is a member of the Colonial Athletic Association. Yesterday, Aleks and his U of D teammates were in the Fighting City of Philadelphia to play LaSalle University and the game was televised on NBC Sports Network!! On the season, Aleks is averaging 7.3 points and 3.0 rebounds per game!

KEEP UP THE GREAT WORK WORK WORK ALEKS ... WE ARE VERY PROUD OF YOU!! 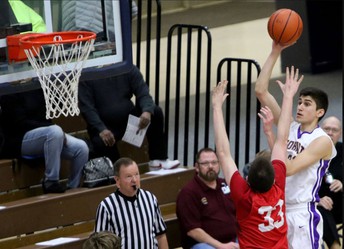 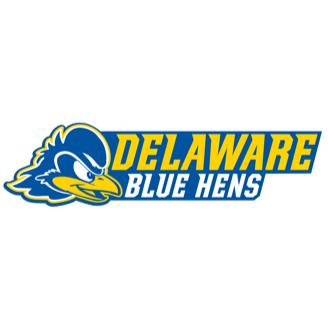 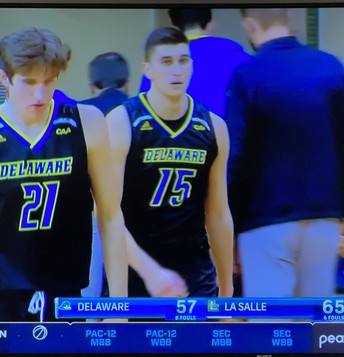