Computing and the World Wide Web

Computing and the World Wide Web

In 1936 Alan Turing who invented the first 'tinking machine' , in other words computer.

Alan Turing was a very clever man and during the war he was employed to crack the german Enigma war code and the cambridge university student played a massive part in the success of the war.

Alan Turing's idea became a world wide phonomana and plays a massive part in our day to day lives and I can not imagine where the world would stand without this particular technology.

In the 1980's Tim Burnes-lee invented the World Wide Web (that is where www. originates from) and he suffered from information overload so he came up with this idea that could potentionaly benifit millions of people around the world.

This idea that he had was to link (hypertext) all of his and other people's information together so people could access evrybody's files and folders. To make this idea work he had to invent addresses for all the documents so the files and folders could be easily accessed and more importantly invent a world wide computer language which every computer used so all the computers around the world could communicate and this was refered to as 'code'. 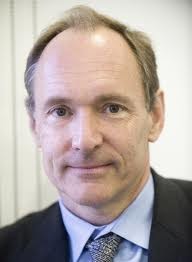