Nine weeks of school have come and gone in a blink of an eye! Students, you now have official grades on a report card. There is still time to make the grades better in the second quarter.

Starting this week, students who are below a 2.5 GPA will be given a bi-weekly progress report that will need to be signed by every teacher. I will also be reaching out to those teachers so that they know the reports are coming. The only way to make your grades better is if YOU approach your teachers to get your grade up. If I approach you individually, you'll know why!

We have a lot going on in the next few weeks! There are only 19 days of marching season left and we still have six practices, three football games, one competition, and MPA to do! We will need all hands on deck to guarantee a successful end to the season!

Official paperwork will be sent home this week for the field trip. I only had 32 of the 62 students fill out the Interest Form, so I am still unsure of who wants to attend the trip. This paperwork will be due quickly so that I can order the hotels at a reasonable rate. 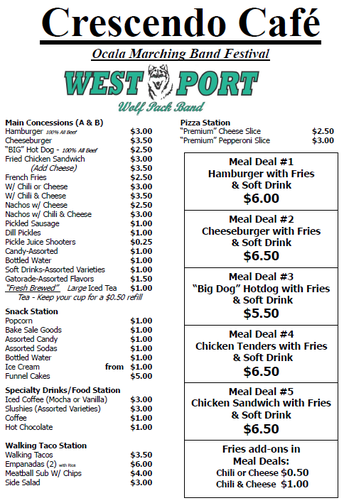 We will be performing at the Ocala Marching Band Festival at West Port High School this Saturday, October 20th! We will be competing in Class 2A against seven other bands! This will be another long day, so plan on having enough cash for lunch and dinner at the competition!

Mr. Vance put this statement in our Director's Packet, "We have a new policy due to increased security easures that prhobits bags larger than 12" X 12" in size. Also, all bags may be searched at the gate. Also, no food or drinks will be allowed to be brought in." We will obey these rules, however we will be allowed to bring in our red water cooler that EVERY student needs that day.

Here are the details:

11:30 AM - Band can move in groups of three to eat lunch. Eat something appropriate since we perform at 3:15 PM!

YES THERE IS ZERO PERIOD!

Rib tickets are due

Now is the time where we start wrapping up this fundraiser. If you have unwanted meat sticks, bring them back so that you do not get charged for them.

Rib tickets are on sale now! $20 per slab and a minimum of $10 will be credited into your student account. This is a very profitable fundraiser for us! Angelia Wood (Momma A) will be at the school on Tuesday, October 9th to pass out any tickets students may want to pick up. Do not miss out on this fundraiser!!!

Ribs will be on sale until Friday, October 19th. Pick-up day is scheduled for Saturday, October 27th from 10 AM - 2 PM. There will be a limited supply of ribs available the day of, but NO PROFITS will go into student accounts for ribs sold on that day. 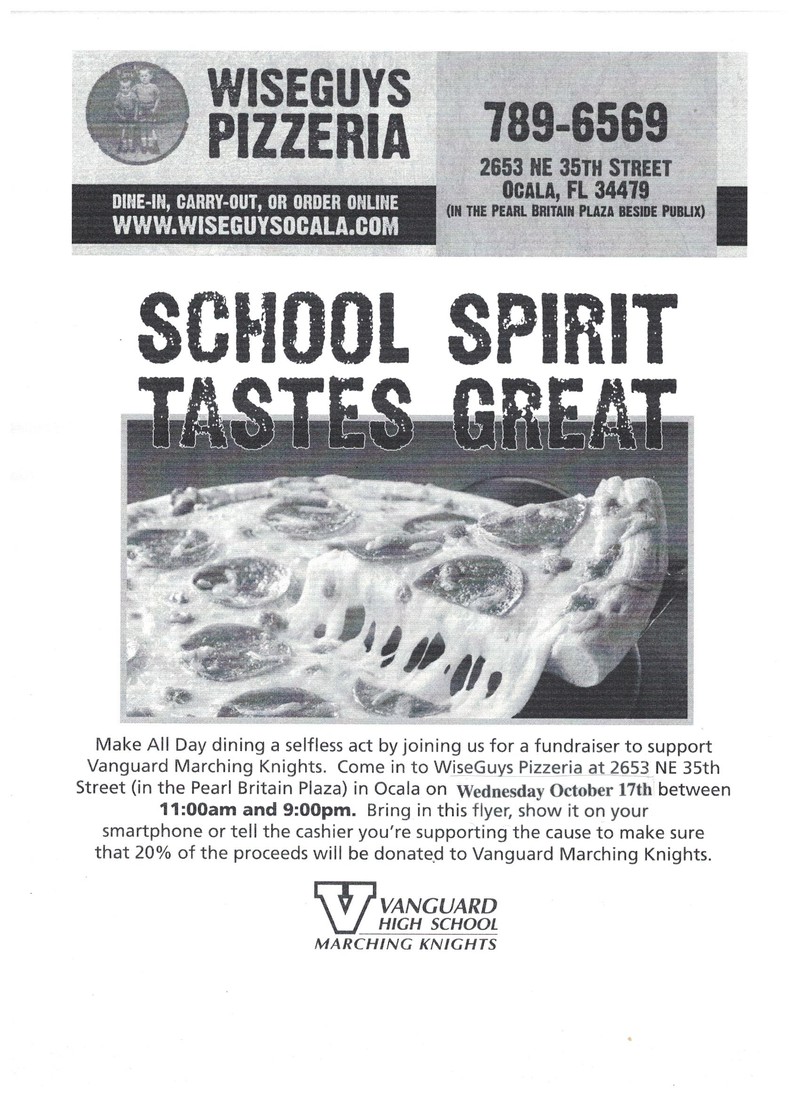 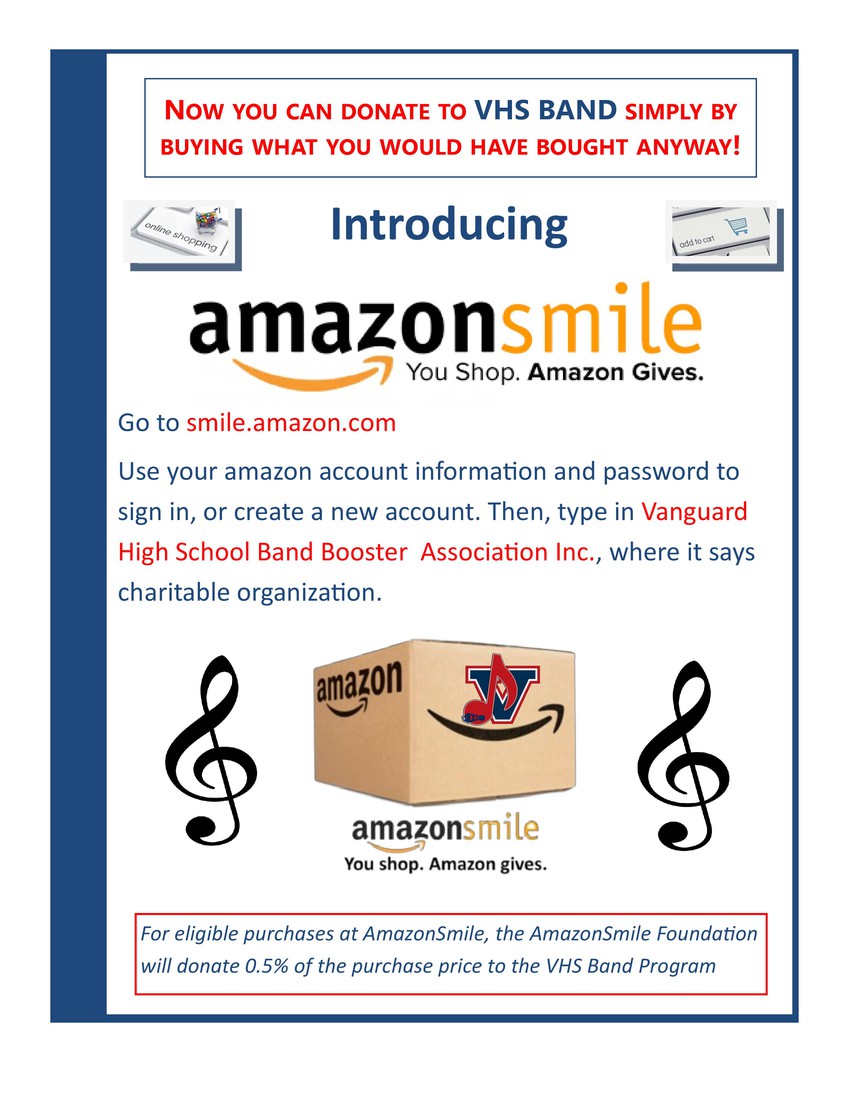 Thanks to Mrs. Vitale for letting us know about this grant! Vanguard High School Band has been awarded a $1,000 community grant!!

We are excited to announce that the band will be participating in the Grand Re-Opening of Walmart located at 4980 E Silver Springs Blvd, Ocala, FL 34470 on November 9th, 2018. This is a great way to get out into the community and show what VHS is made of!

No birthdays this week!

The magnitude of the task the kids face in every field show they perform?

The show is about 8 minutes, or 480 seconds, in length. If the average tempo is about 120 beats per minute, the show contains, 960 beats. For each beat, the following must be accomplished:

This is a total of 8,640 potential Marching and Maneuver errors per student. These apply to each member of the band and color guard as well, so we have a possibility of 535,680 Marching & Maneuvering errors.

For 12 flags, we can add at least six more potential errors per beat:

This comprises another 69,120 potential disasters.

We have 50 members in the wind section, and if we consider that the average "part" has about two notes per beat all told, there will be 1,920 notes per player. The possible errors for these amount to:

There are 13 players in the drum line. They play, on the average, about the same number of strokes as the horns play notes...the snares and tenors play more strokes per beat, but the basses and cymbals fewer. So again, we have about 1,920 notes each. There errors can be:

The Drum majors, for each beat, can make eight of the marching errors plus:

Meaning another 17,820 exposures to error.

Just what does all this mean? Adding it up, it's staggering!! Something like 1,731,840 potential errors. Let that sink in. (PAUSE) That's 1,731,840 places that have to be spotted and corrected before your job is done. When you divide that figure out, you find that on the average, every kid in the band has a potential of making something like 27,933 errors. It is a real credit to them if they do not.

Where else, in what other realm of society or our daily lives, does a kid have the "responsibility" for NOT making 27,933 errors, on display in front of thousands of people, with the pride and spirit of all of his peers riding on the performance, all the while being closely examined by a dozen trained judges who are paid to find the kid making a mistake?!?

Nowhere else, in or out of the American school system, do kids willingly take that kind of responsibility...except in 'HIGH SCHOOL MARCHING BAND'.

Thank you to Mrs. Vitale, Madison, Sakia, John, and Rey for running rehearsal on Tuesday while I was flying back from Houston! It's great to know that even if I am not there, our band can still manage to get work done!