Get email updates from Kerrie:

We are currently wrapping up a busy winter season here at Red River. The girls hockey team just capped off another competitive season finishing with an overall record of 9-16. The KnightRiders entered the state tournament as the 8th seed, but came up short in a couple battles with Fargo Davies and Mandan. Kaylee Baker and Averi Greenwood were named to the all conference team. Our wrestling team qualified 5 wrestlers for the state tournament under 2nd year head coach James Covington and had Kellan LeFountain place 8th. In its first year as a program, girls wrestling had two girls place in the state tournament. Bryn Larson placed 8th and Mari Rout placed 7th under the helm of head coach Matt Berglund. Both the boys and girls basketball teams will begin EDC tournament action this week. The boys finished the regular season in 4th place (14-6) and will host Shanley in the quarterfinals, while the girls finished in 3rd place (16-4) and will host Devils Lake. KnightRider gymnastics had yet another great season under 1st year head coach Megan Johnson and finished 3rd in the EDC meet and 6th at state. The KnightRiders placed Delani Barrett on the All Conference Team and she was also named the EDC Senior Athlete of the Year. Boys swimming and diving, although still fairly young, have seen many career PR’s each meet and look to carry that momentum into the State Meet! The 200 medley team composed of 2 of our Roughriders (Jackson Rerick & Logan Bjerke) were EDC Champions. Logan Bjerke was also named to the All Conference Team. VEX robotics will host the state tournament this weekend and Mr. Ostgarden looks to have the teams in a great position to make a run at another state title! Finally the Red River boys hockey team capped off their year with the schools 19th state title! The Riders entered the state tournament as the 3rd seed in the east, but turned it up a notch when it mattered most and capped off the title with a 4-2 victory over Fargo Davies. Wyatt LeDuc and Carter Sproule were all named to the All State Tournament Team and Wyatt was also named tournament MVP! Congratulations to all teams that have finished their seasons and good luck to those with tournaments approaching!

The fine arts have also had a successful winter with many amazing performances! The manatones and velvetones have been busy serenading people all winter, while the theatre department just wrapped up their winter comedy “Clue On Stage” and are now prepping for the upcoming musical “Footloose”. We also have many concerts fast approaching with Band on March 1st (7:00pm), Choir on March 7th (7:00pm), and Orchestra on March 8th (7:00pm). All performances will take place in the Red River Performance Hall! Amazing job throughout this year by so many talented Riders!

Student Council recently wrapped up our winter Snow Week and it was a huge success! We kicked things off Monday with Rider Idol 2022! The Northern Lights consisting of Campbell Dorsey, Jasper Ortiz, Claire Huebner, Emma Moe, and Liz Corcoran took home the title and will compete for the Grand Cities title coming up in April. On Wednesday night we held our annual powder puff volleyball tournament that saw the seniors boys take home the championship.

During Snow Week, student council also raised money Giving Hearts Day and more specifically the Grand Forks Giving Tree. Through events like the powder puff volleyball tournament, bucket passing at events, selling teas through the DECA school store, and donating a portion of our dance proceeds, the students raised $2,100! Raising money for such a great cause was definitely the highlight of the week. Thank you to everyone that contributed!

With that, we say goodbye to winter (eventually) and hello to spring! Thank you to the entire Rider Family for all that you do to support our Rider students and community.

May 4- Early Release at 1pm

Spring White Cards will be available for pickup beginning February 1st. All payments should be made through myschoolbucks.com. If you need more information, please click the button below.

Open to all interested boys and girls grades 7th-1th grades. Click the link below for all information and registration forms.

Click the link above for information regarding testing, college prep, and other counesling material. 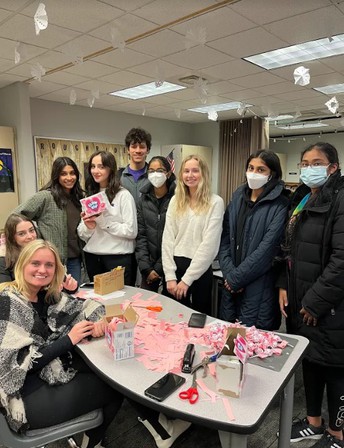 This month was all centered around showing love and promoting good mental health. For Valentie's day, HOSA distributed blow pops with inspirational quotes to each student.

HOSA is planning for the upcoming state conference on March 21st and 22nd at the Alerus Center. The conference is a series of competitions that students can sign up for to present on health topics. We could not be more excited to be able to get the opportunity to be a part of SLC yet another year. 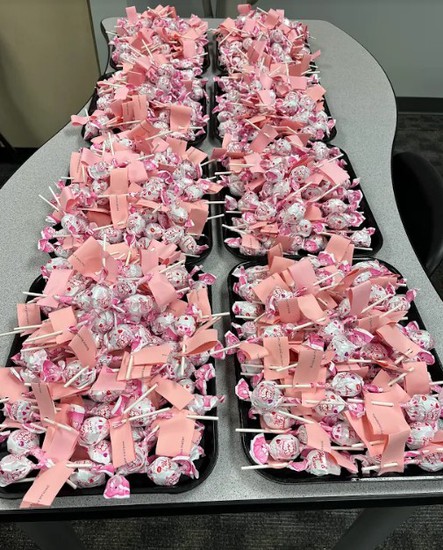 Math Track- Congrats to our winners and participants!!! 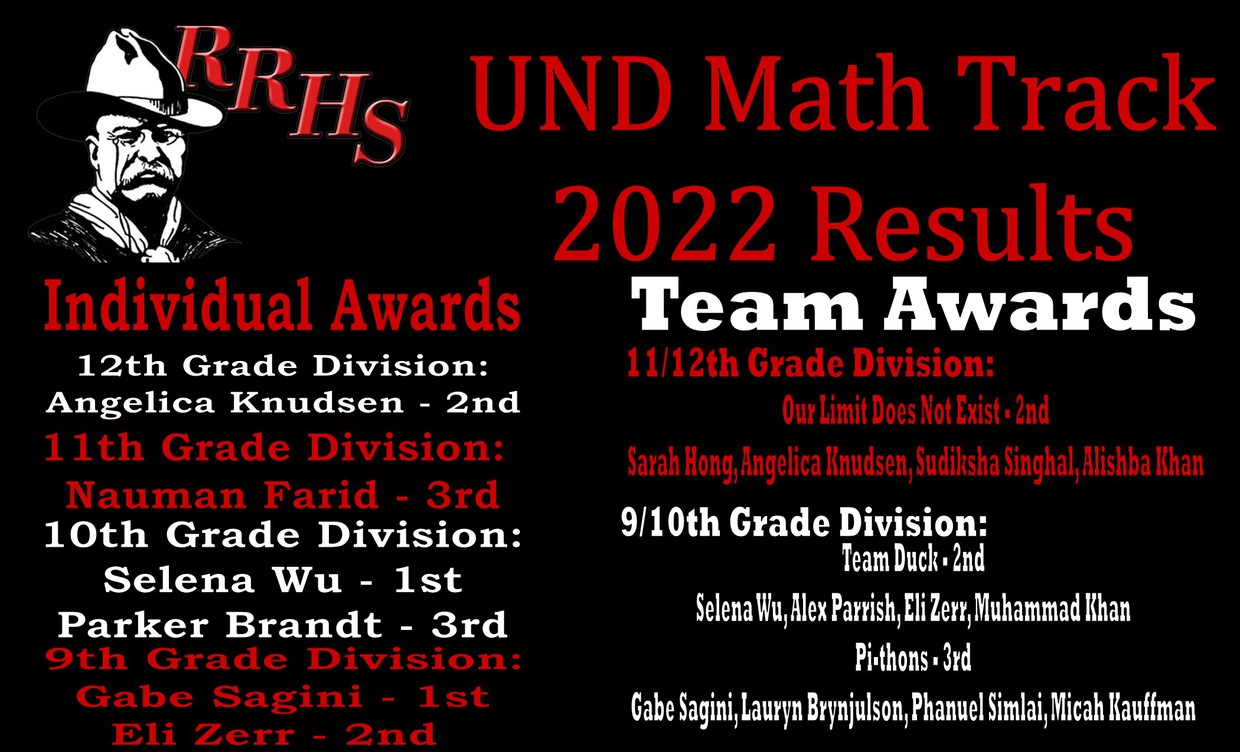 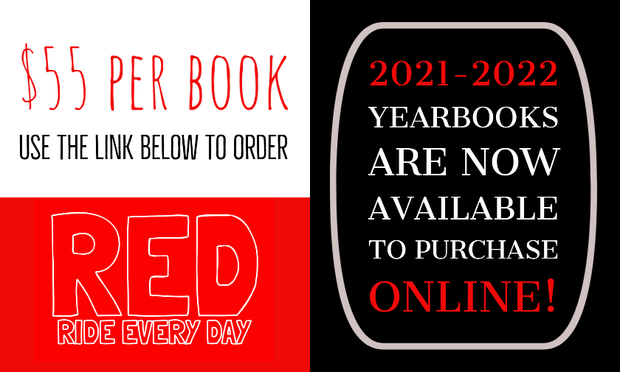 Grand Forks Public Schools is extremely concerned about the prevalence of vaping devices on campus, as administrators and school resource officers regularly receive reports about their presence. In an effort to aid school officials in preventing these devices from being brought into our schools, beginning on Tuesday, February 1, 2022, we will begin using non-invasive metal detection wands on students who are reasonably suspected of hiding vaping contraband or other items that present safety concerns on their person in a private setting. Families will be contacted by school officials if their student has been suspected of vaping and/or if the wand has been used to rule out the presence of a suspected contraband. Thank you for your ongoing support of our efforts to keep our students and school environment safe.

Talking openly and honestly with your kids is one of the most effective ways to support their
behavioral health. Whether it’s everyday topics like friends and school, or more serious topics like substance use, anxiety, or depression, it’s never too early to start the conversation. As your kids grow, your conversations may change, but they will always be centered on keeping them happy, healthy, and safe. Keep your conversations relaxed, friendly, non-judgmental, and genuine. And most importantly, be a good listener.
What do I say? Visit http://www.parentslead.org/

Follow Kerrie Boemann
Contact Kerrie Boemann
Embed code is for website/blog and not email. To embed your newsletter in a Mass Notification System, click HERE to see how or reach out to support@smore.com
close