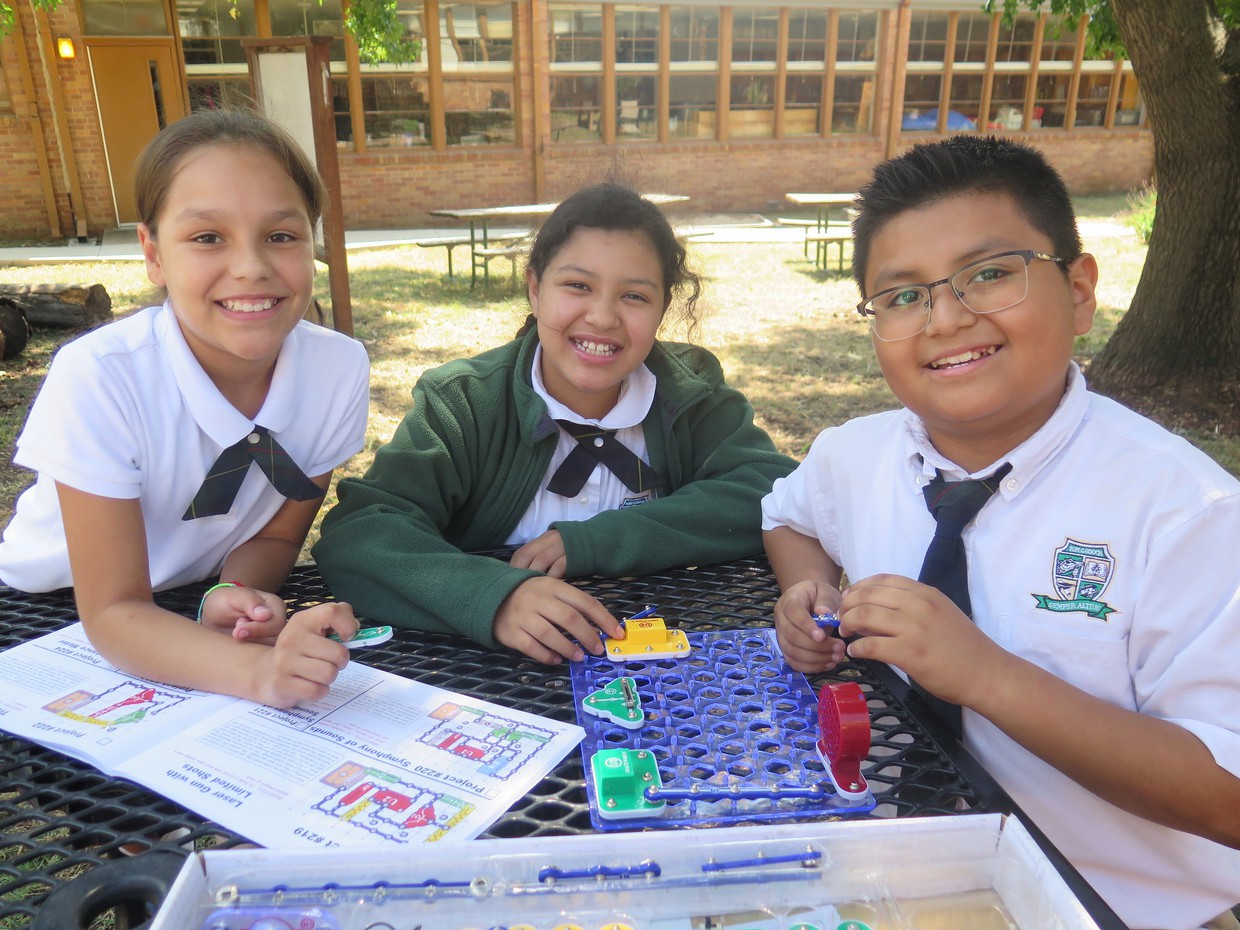 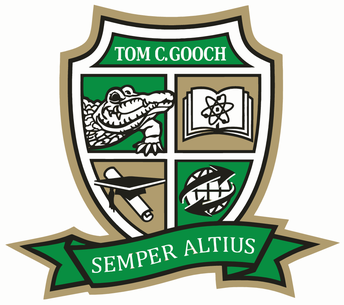 Mission: To Create a community that develops scholars with the knowledge, values and vision to become college and career bound. 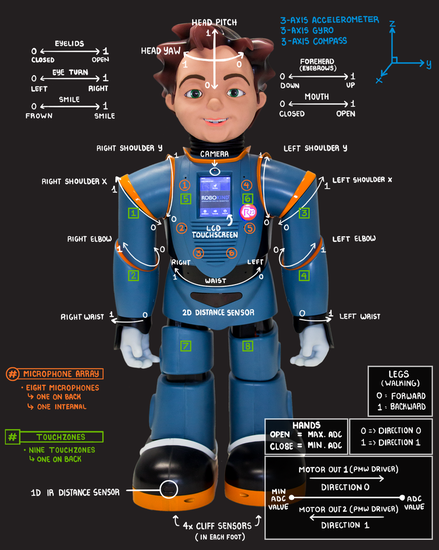 We are very pleased to announce the arrival of Milo at Gooch. Milo is an advanced interactive robot with realistic facial expressions who will be working with various students here at Gooch on the autism spectrum. RoboKind, the Dallas based company that has spent the last 8 years developing Milo has generously donated Milo and a curriculum to Gooch. According to RoboKind, Milo is "a non-threatening way for learners with ASD to practise their communication and social skills.

Milo the robot is designed to be interesting and approachable for learners with ASD. He can walk, talk and even model human facial expressions. Milo never gets frustrated or tired. He consistently delivers lessons in a way that learners with ASD respond to. This recurring positive experience creates an environment in which learners can learn and thrive. Robots4Autism helps learners improve their social and behavioral skills and gain the confidence they need to succeed academically and socially.

Using the Robots4Autism program, individuals with ASD learn to: 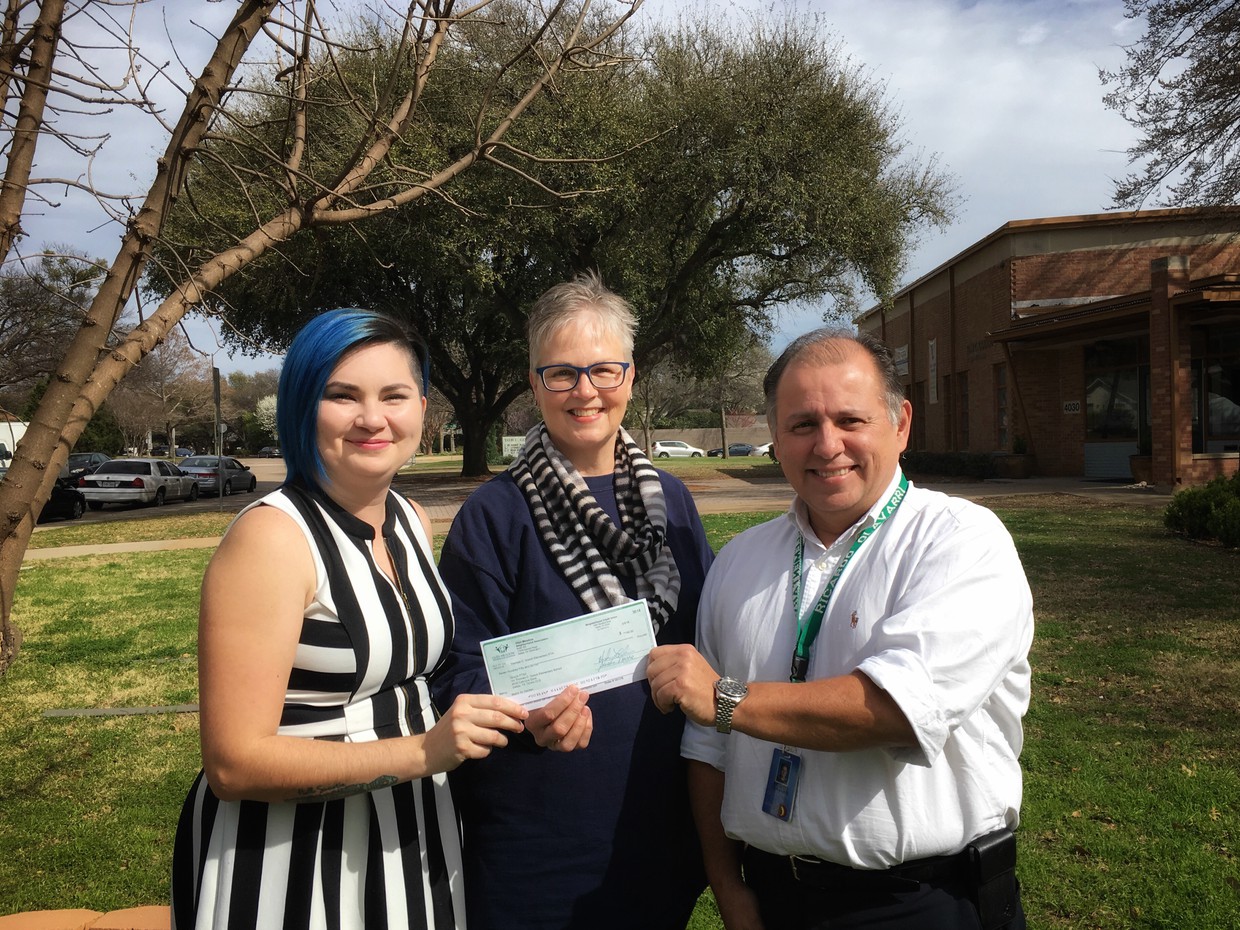 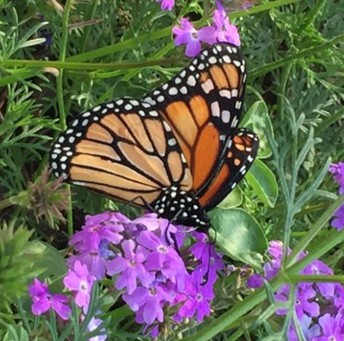 Gooch Elementary is located on the Monarch migration pathway. Monarch populations are in steep decline due to habitat loss and pesticide use. We have a grant from the National Wildlife Foundation Monarch Heroes program to put a Pollinator Garden out the front of the school. It will be located in the grassy area between the front entrance and the car park. The grant is enough to cover the garden beds and plants. In order to build a seating area in the garden, we aimed to raise an additional $1,500 dollars to purchase three outdoor benches and the gravel necessary for the courtyard in the garden. There are very few places to sit and enjoy nature in our neighborhood, and this will be a beautiful sanctuary for all. The Glen Meadow Neighborhood Association pledged to match donations dollar for dollar up to $750 dollars. The Gooch PTSA is thrilled to announce that we raised $1055 in donations from community members, which when matched by the neighborhood association donation amounts to a grand total of $1805. We want to thank everyone who has supported the project so far. The first work day on the garden will be on March 24th. Special mentions to those who made large donations, and will have benches dedicated in their names go to the Glen Meadow Neighborhood Association, and Anna Schiller. If you are able and willing to volunteer to help install the garden please leave your name at the front office. Lots of hands will be needed to make this a great garden. If you are able to donate, please do so by following this link.

Literacy Night at Marsh with a Seuss Twist 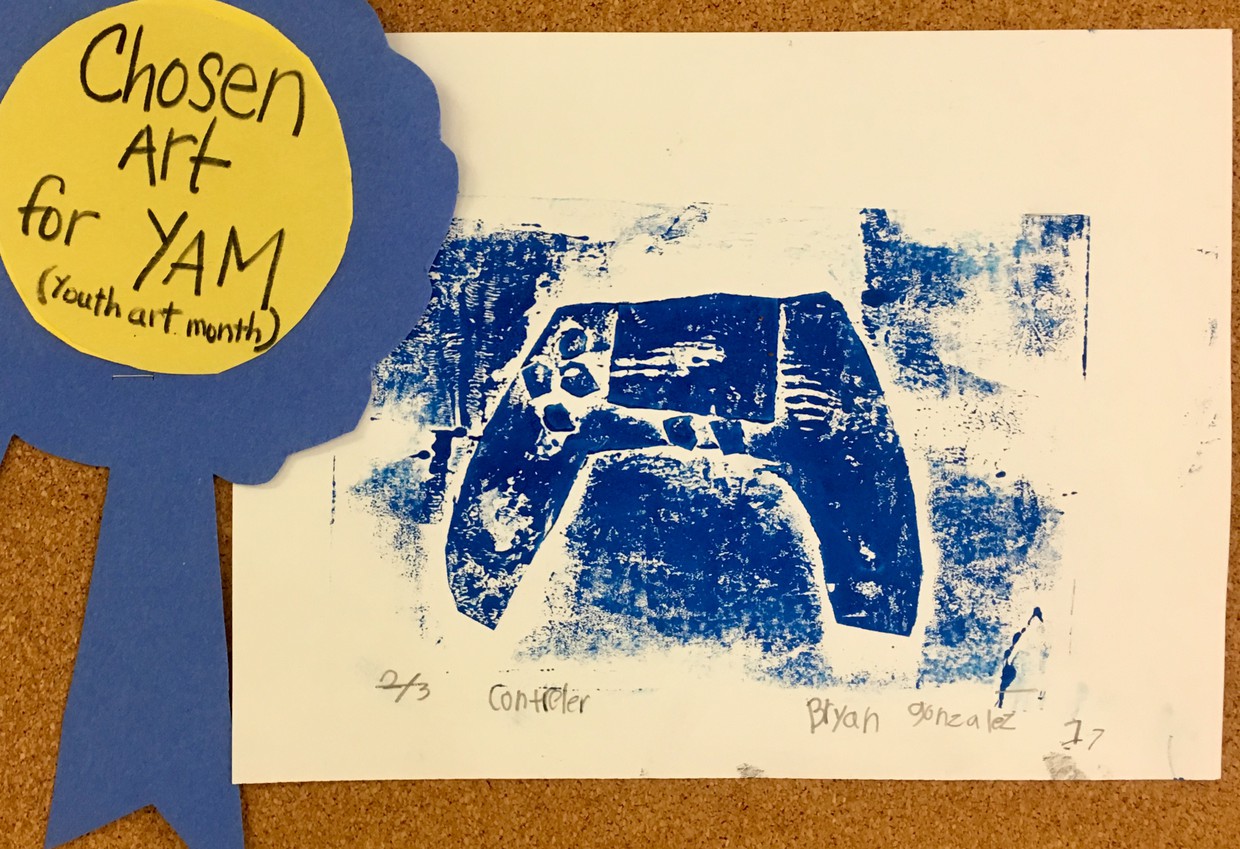 This month is Youth Art Month, celebrated by an exhibition of youth art at Fair Park. Bryan Gozalez's print using the collograph method was selected as the only work in the exhibition to represent Gooch. Well done Bryan! 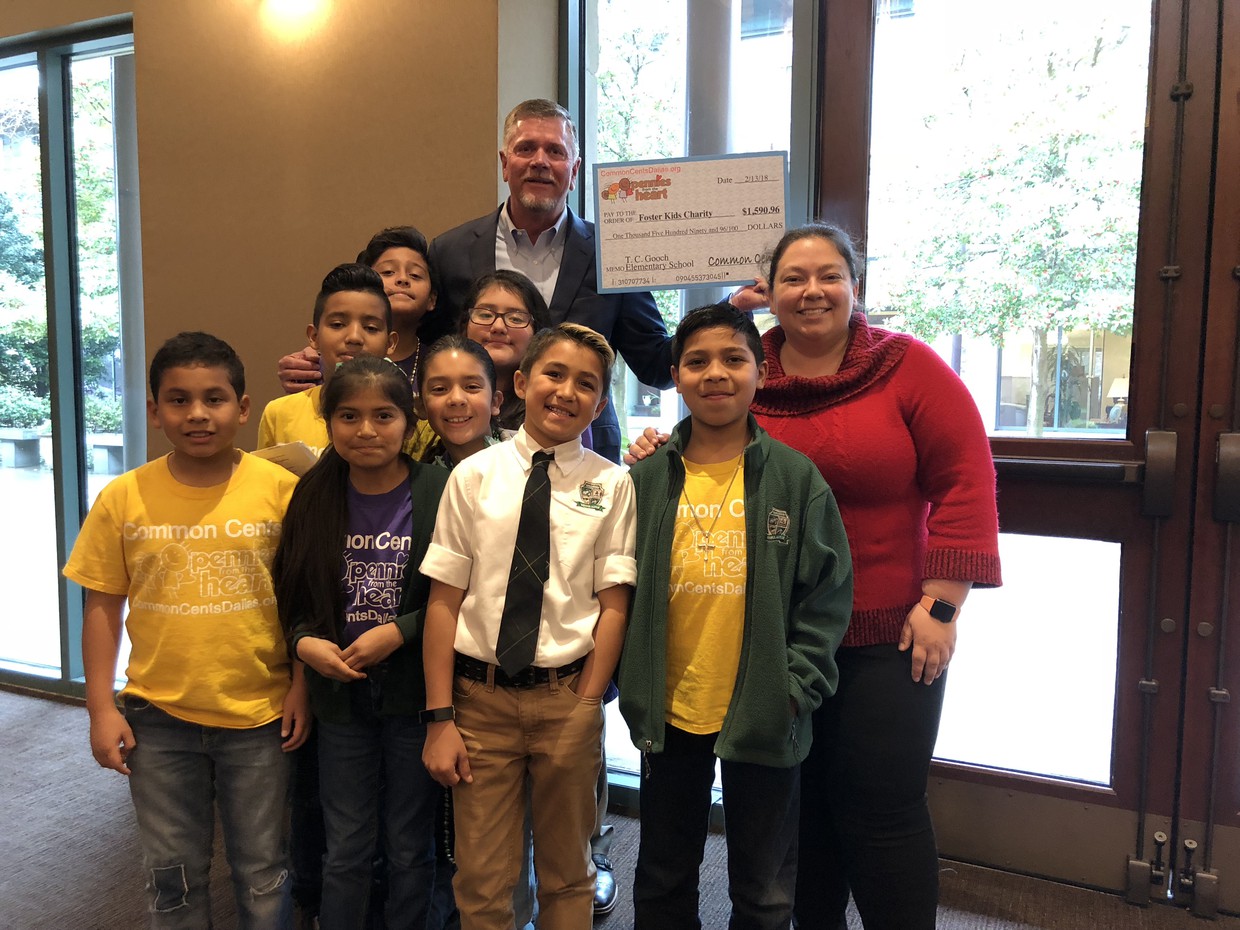 Spring into Spring Break with some junk drawer STEM activities.

With Spring Break almost here, here are a few fun STEM activities that you can do with things that you may well have in the house already.

This is a simple construction activity using straws and tape.

Cut off a 3' piece of masking tape. Lay the tape somewhere flat with the sticky side up. Turn the ends under so that it lays flat and straight. Starting 3" from one end, stick a straw down across the tape so that the middle of the straw is stuck to the tape. Put down straws in this way across the tape each 2", until there is only a 3" gap at the opposite end of the tape. Cut off another 3' length of tape and stick it on top of the first sandwiching the straws in between the two pieces of tape. Remove the bottom tape from the table and stick the ends together. Now you are ready to try your wave machine. Attach one end to a table, and the other end to a chair using 4" pieces of tape. Make sure the wave machine is stretched tight between the two pieces of furniture. Pop down the first straw on the tape with a fast karate-like chop. The wave will move fast up and down the machine. Watch the ends of the straws to observe the motion. In the video above you are seeing the wave in slow motion. This kind of a wave is called a transverse wave.

See what happens if you use longer or shorter straws. Try putting equal lengths of yarn through the straws to see what effect that has.

See ice form in a matter of seconds

Put several (but not too many) bottles of water into the cooler. You want to chill them a LOT, so fewer will work better than many. Fill the cooler about half way with ice, and make sure that the bottles are completely surrounded by the ice. Add about 1/4 cup of salt to the top of the ice. Ice cream salt, rock salt or table salt will all work. Add more ice to the cooler until it reaches the necks of the water bottles, then add another 1/4 cup of salt. Pour two cups of water into the cooler and put the lid on. Leave alone (without bumping) for at least 15 minutes for the water to get really cold.

Place a piece of clean, unsalted ice into the middle of the plate (or metal cooking pan). Take one bottle of water out of the cooler, uncap, and immediately pour very slowly over the piece of ice. Watch the ice form immediately as it touches the ice cube, and build a stalagmite (column of ice) as tall as you can. Watch how amazed people are!

The science behind it: There are two factors causing this effect. By adding the salt to the cooler we cause the liquid in the bottles to be super cooled - meaning, below the temperature at which water freezes. Because the water in the bottles is purified, there are no impurities for ice to form around in the bottles, so they don't freeze even when they go below the temperature at which water normally freezer. Once the water meets the ice cube as it is poured out, the crystals in the ice cube "tell" the water how to freeze.

Can you make shapes with the ice other than a stalagmite? What happens when you pour the super cooled water on something other than an ice cube?

Baking Soda is the Bomb!

Go outside and blow up a bag.

Adult supervision is required for this one.

Small ziplock type bag (that does not leak)

Make sure that you do this outside - it will be messy! Take 4 squared of toilet paper and fold them in half length-wise. Put two spoonfuls of baking soda in a line down the middle of the toilet paper rectangle lengthwise. Fold one long edge over the line of baking soda, and then the other. Twist the ends together to make a roll with the baking soda in the center. Set aside.

Pour 1/2 a cup of vinegar into the zippered sandwich bag. Hold the bag upright on your surface with one hand, and put the baking soda package into the bag but don't let it touch the vinegar yet! Pinch the end of the roll from the outside of the bag to prevent it from touching the vinegar while you seal the back. Shake the bag a few times and let go and put it down. Watch your bag start to expand!

The science behind it: Vinegar is a solution of the weak acid acetic acid and water. Baking soda is the chemical sodium bicarbonate, and it is a weak base. Acids and bases neutralize each other, while giving off gas, water, salts, and sometimes other products. The bag is expanding due to the gas that is released by this reaction, carbon dioxide, and lots of it!

It's time again - save the date for Gatorfest! It will be Saturday, April 21, from 11am-3pm. Gatorfest is a carnival for all Gooch Gators, with fun, games and food for all, and the main PTSA fundraiser for the year. Show up and support Gooch!

March is nomination month for the PTSA 2018-2019 board. This is a great opportunity to make friends and serve our community. Stay tuned for updates on positions and how to be a part of the solution.

The Gooch T-Shirts are in! PTSA will be selling them at all events, and other times announced on Bloomz. 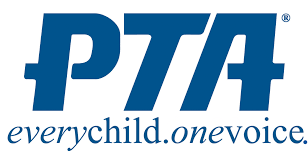 We will cultivate a premier learning community to foster globally responsive citizens, personalizing instruction for every student.

Therefore, we are committed to: 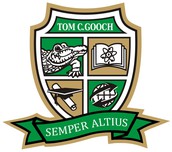 Facebook @goochelementary
4030 Calculus Drive, Dallas, TX, United States kprays@dallasisd.org 972-794-2500 dallasisd.org/gooch
Embed code is for website/blog and not email. To embed your newsletter in a Mass Notification System, click HERE to see how or reach out to support@smore.com
close