Once upon a time, Cronos, father of the gods, who had become king of the gods by killing his father, Uranus, was told that one of his sons would kill him. Cronos was very careful, in that each time he had a son or daughter, he would swallow them whole. Rhea, who was his wife, decided that this could not go on any longer. The next child she had, she hid away, and gave Cronos a stone to swallow instead. Her son she named Zeus, and when he became old enough, she brought him to Olympus. Zeus and Rhea brought Cronos a drink that had mustard, salt, and nectar, to make him throw up Zeus brothers and sisters. Which Zeus did. Zeus brothers and sisters were very grateful, so they picked him as their leader. Then, a war between Zeus and his brothers and sisters, and his father was started. In the end, after a fight ended with the Cyclopes and hundred handed ones rolling huge rocks down a mountain, and Cronos's army running away. Zeus had one, and was now, and still is, KING OF THE GODS! 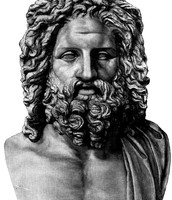 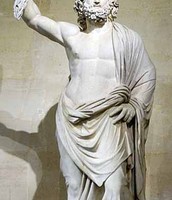 There's this very self obsessed man named Narcissus. All he does is stare at himself in the lake. It is so weird. Before this he was spotted with a nymph that repeats the last thing anyone said. Here is the story. Echo had a very beautiful voice. Everyone loved it. Zeus cursed her with a cure that she could only say the last world that the person said. One day she was in the woods when she saw Narcissus. She fell madly in love but Narcissus didn't like her because she couldn't speak. Then she felt so overcome with sadness that she asked Hera to kill her so she did.One day Narcissus was looking in the water and saw his reflection and herd Echos voice and Nartcissus that it was a water nymph and he wanted to marry her but it was just his own reflection. 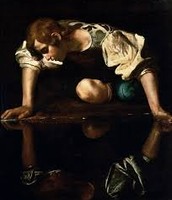 Hercules and His Muscles

Have you seen Hercules muscles lately. They are so big and muscular. I mean probably the reason why his muscles are so big is because of the 12 impossible tasks he finished. You are probably thinking if he finished them how are they impossible? Well how about I tell you then you decide if the tasks are impossible. The first task he did was he was ordered to kill a lion so big and his fur was so thick that no sword nor arrow could pierce through the thick layer. Here are the next 11 tasks he had to do.

11. Second he had to kill the many headed Hydra, whose breath could kill man or beast.

10. Third he had to capture the sacred, golden-horned deer, an animal swift as the wind.

9. The fourth task was to catch a savage boar whose tusks could pierce any armor.

8. Next, Hercules had to clean out the vast and filthy stables of King Augeas in a single night.

7. Then he had to destroy a flock of man eating birds that hid in a dangerous swamp.

6. The seventh task was to capture the fire-breathing marauding bull of Crete.

5. Next he had to steal Diomedes’s hourses, which fed on human flesh.

4. Then Hercules had to fetch the golden girdle worn by the queen of the Amazon warrior women.

3. The tenth task was to seize the monster Geryon’s cattle, guarded by his two headed dog.

2. The eleventh task was to collect three golden apples protected by a ferocious dragon.

1.His last task was the hardest of them all, he had to fetch the three headed guard dog, Cerberus, from Hades himself.

Aren't those hard tasks? The reason why he had to do them was because he went to the gods to seek forgiveness for what he did and those tasks are how he could make it up. 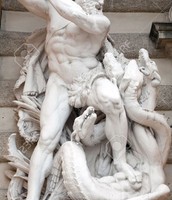 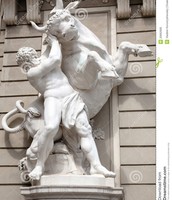 Hercules with the Bull 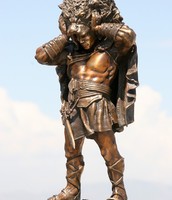 Birth is The Twins

Zeus pursued a nymph named Leto, but Hera was watching, so he changed her, and himself into quails. The quails met in a glade, but Hera still saw them. She put a curse on Leto, saying that she would bear a child, but she could not bear any children where the sun shines. She sent her great serpent Python to enforce the curse. Zeus sent the south wind to carry Leto to a island called Delos. He made it so that the island was always moving, so the serpent could not catch her. Here on this magnificent island, Delos, Leto gave birth to twins, Artemis, and Apollo.

Come and Socialize with other Greek Mythology Fans. Come and eat your favorite food like ambrosia. We would love it if you would come!
Get Directions

If a god says don't look back DONT LOOK BACK!

Sasha Likes aloe drinks and she has a lot of experience with Greek Mythology. She was in a play for Greek Mythology. She loves sushi and her passion in life is caring for animals and dancing to The Vamps. She recently preformed at the schools talent show and she was amazing.

Alyssa loves chilling in the waves and eating at the local taco restaurants. She hate the color red and she hates birds. Her passion in life is to become a professional wake boarder. She is not scared on anything. Things she does in her free time are sleeping and watching her favorite show Lab Rats.

Carolyn loves Taylor Swift. She loves watching CNN. She recently read an article online on how to cook amazing food in the microwave. Her favorite animal is a fox or cat. She thinks that sea urchins are pointless and she wanted to be a surgeon when she grows up.

Perseus was a long tale. The story was about a girl who got locked up in a castle because her dad was scared that she was going to have a son that wanted to kill him. But she had a son and the dad sent them away on a boat with no sail. A fisherman saw how beautiful the girl was and the boat took them to a island. Then Perseus wanted together the head of Medusa because he wanted to kill an evil person. Then he went on a long journey and in the end he got the head and killed the evil guy.

Facebook @twitter_godlygossip
Follow us and you will learn more about us and get exclusive Greek Myth facts.
Godly gossip building Godlygossip@gmail.com 6751989135 Godlygossip.com