Come To The New World

Come Join One of the Thirteen Colonies Today!

Come To The New World

Come Join One of the Thirteen Colonies Today! 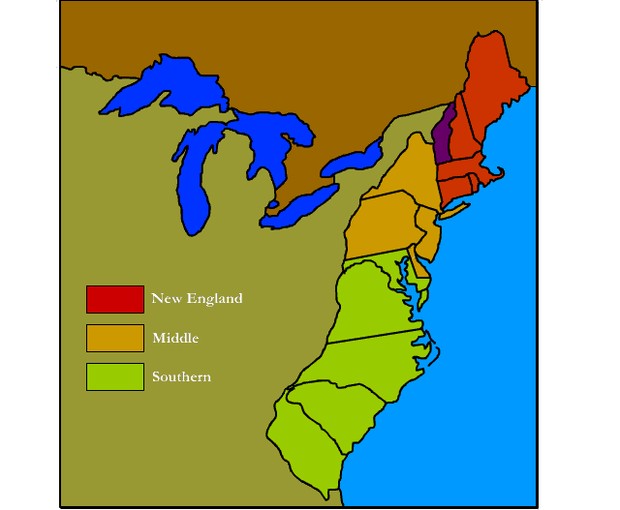 We have many different colonies for you to choose where you live. Most would live in a colony where you could practice your religion, well we can help you there. There are three different colonies with the 13 states located in the borders. They are the New England Colonies, Middle Colonies, and the Southern Colonies.

Massachusetts was founded in 1630 by John Winthrop and others, at Massachusetts Bay. The government was strongly influenced by puritans; Corporate. Major industries are fishing, corn, livestock, lumbering, and shipbuilding. The climate consists of long winters, short summers. Furthest north, many trees, and good seaports because of being close to the sea. Economy; subsistence farming - just enough food for themselves with very little left over for trade. Fishing, whaling, trading,and had many trees for lumber - shipbuilding. The religion that is practices here

Rhode Island was founded in 1636 by Roger Williams and others, at Providence. Pays natives to have land. Government is Corporate. Major Industries are Agriculture (livestock, dairy, fishing), Manufacturing (lumbering). Climate is long winters, short summers. Furthest north, many trees, and good seaports because of being close to the sea. Economy; subsistence farming - just enough food for themselves with very little left over for trade. Fishing, whaling, trading,and had many trees for lumber - shipbuilding.

New Hampshire was founded in 1638 by John Wheelwright and others. Organized, has an English royal colony and government. Major Industries are potatoes, fishing, textiles, and shipbuilding. The climate is like every other New England colony, long winters, short summers. Furthest north, many trees, and good seaports because of being close to the sea. Economy; subsistence farming - just enough food for themselves with very little left over for trade. Fishing, whaling, trading,and had many trees for lumber - shipbuilding.

Connecticut was founded in 1636 by Thomas Hooker and others, at Hartford. The government is Corporate. Major Industries are wheat, corn, and fishing. Like the other three New England Colonies, Connecticut has long winters, short summers as it is closer to the North. Many trees, and has good seaports because of being so close to the sea. Economy; subsistence farming - just enough food for themselves with very little left over for trade. Fishing, whaling, trading,and had many trees for lumber - shipbuilding.

New York was founded in 1626 by Peter Minuit and others, on Manhattan Island. Has a constitutional monarchy as a government. The major Industries are manufacturing (shipbuilding, iron works). New York has hot, humid summers (Lots of swimming!) and bitterly cold windy winters with much snow (Have yourselves a very white Christmas). The terrain was swampy near the coast and the Hudson River. Further north where mountains covered with forests, the ground was rocky and the soil was good for farming. New York has mountains, plains, and rolling hills, and the Hudson River. Colonist made their living in a variety of ways; selling fur, chopping lumber, trading, shipping, and slave trade, and as merchants and tradesman in the colony's towns. New York was situated between the Puritan colonies or New England and the catholic colony of Maryland.

New Jersey was founded in 1664 by English colonists. New Jersey’s government is a very fair government that allows you to elect representatives for a twelve-member council so you will always have a say in how your government is run. Major industries; Manufacturing (iron working, lumbering) . Like all of the Middle Colonies, New Jersey have summers that are great to swim in the river during, and winters were there are lots of snow so kids can make snowman, etc. The land of New Jersey is very unique. The more inland you get, the hillier the land gets and the closer you get to the ocean, the more flat the land gets. The flat land by the ocean is very good if you are planning on having a plantation because the flat land is good for growing crops and the ocean makes for a great place to ship off your crops all around the world. Many different people settle in New Jersey including Dutch, Swedish, Quakers, Puritans, Baptists and Presbyterians. The jobs in New Jersey are baker, cobbler, wheelwright, bricklayer, blacksmith, brewer, whaler, lumberjack, iron forger, ship builder, leather-maker and other craftsmen like this. Some of the many products found in New Jersey are whales, lumber and iron.

Pennsylvania was founded in 1682 by William Penn and others, at Philadelphia. Pennsylvanian is a Propriety colony, Semi-autonomous Constitutional monarchy as a government. The major industries are agriculture (wheat, corn, cattle, dairy), manufacturing (textiles, paper making, shipbuilding). Hot and humid in the summer great for swimming in the river and ponds nearby, in the winter it was cold with snow so always except a white Christmas. Has dense forests, mountains, streams, and rivers. The economy of Pennsylvania did not have to depend on only one source of economic security, since the state is rich in natural resources. Much of the economy depends on farming. Access to to water led to shipbuilding and trade along the rivers, as well as providing fuel for saw and grill mills. Pennsylvania was full of Quakers for that was their religion, Quakers are one of the most despised religious group, they said that all people were equal in God's eye.

Delaware was founded in 1638 by Peter Minuit and others. Delaware's government is a Proprietary Colony. Major Industries; Agriculture (fishing), Manufacturing (lumbering). LIke the other Middle Colonies, the summers were hot and humid while the winters were snowy. Delaware is the second smallest state, although it has some major advantages.They wanted the furs, fish and timber that was very rich in that area. Also Delaware's rivers powered their sawmills and flour mills. It had great land for cows, chickens, and pigs to graze. Not dominated by a specific religion which gave way to religious freedom for Quakers, Catholics, Lutherans, Jews and others. Delaware was often referred to as a breadbasket colony because it grew so many crops, especially wheat. The wheat was ground into flour in flour mills then shipped to England. A typical farm was 50 to 150 acres consisting of a house, barn, yard and fields.

The colony of Maryland had a Proprietary Government at first and then came to have a Royal Government. Their Major Industry is tobacco crops. They depend heavily on tobacco. They bought goods like furs from the Indians, and sold it to merchants, who later sold it in England. There are 4 distinct seasons, with relatively hot, humid summers and cool or cold winters, with snowfall raining from a foot or less on the eastern shore to over 100 inches in the mountains. Maryland is to the east of the Appalachian Mountains. Their religion was mainly Catholicism. There were also Puritans. Many of the people who set up colonies in America, did so to get away from the Church of England.

Virginia’s government is a Representative government; “House Of Burgesses”. There Major Industry was tobacco crops. The colonists in Jamestown made a living by selling tobacco crops. They sold it to anyone who would buy it. The colonists were pretty poor until they found way too make money off of tobacco. The colonists in Jamestown also made their way by teaming up and being friends and trading jewels with the Indians in exchange for corn and furs. The land was desirable because of the many trees for building houses and ships, good for growing crops, and good hunting ground. There were also very hot and humid summer, mild winter. There were the Anglican Church and Church of England.

Their government was Constitutional Monarchy. Major industry was tobacco crops. There were very suitable to agricultural products. They also have rice ,sugar, cone, and other crops and plants. South Carolina has mild winter. The southern portion is the warmest.The geography of South Carolina was sandy beaches. Most of the in land is generally marshy land. Protestantism was the dominant religion in South Carolina. At the time Pope had been thrown out of the church by Henry the thirteenth, and held no power amongst royalty. More specifically, the South was Congregationalist, a form of Protestantism.

Colonial Georgia was a royal colony, meaning it was governed by representative from England. Their major industries were rice, lumber and indigo. It was plantations.Slavery didn’t come until James Orglethorpe took away the ban on slavery due to constant complaints from the settlers. Cotton didn’t come until later, when the cotton gin was invented (1793).

There is very cold and icy. Snow was very common and at the time was very strong. There aren’t effects of global warming. There are low mountains areas with excellent soil. In the mid 1700’s John Wesley’ brother brought many Methodist immigrants to Georgia.

Made in 1215, took power away from the King and Queen of England.

The Mayflower Compact was the first governing document of Plymouth Colony. It was written by the Separatists, sometimes referred to as the "Saints", fleeing from religious persecution by King James of England.

Jamestown is the very first colony in Virginia, and the new world. It was founded in 1607, many people died during the winter since they didn't have food. Also they died from different, but deadly, diseases.

Follow Katie Wiener
Contact Katie Wiener
Embed code is for website/blog and not email. To embed your newsletter in a Mass Notification System, click HERE to see how or reach out to support@smore.com
close