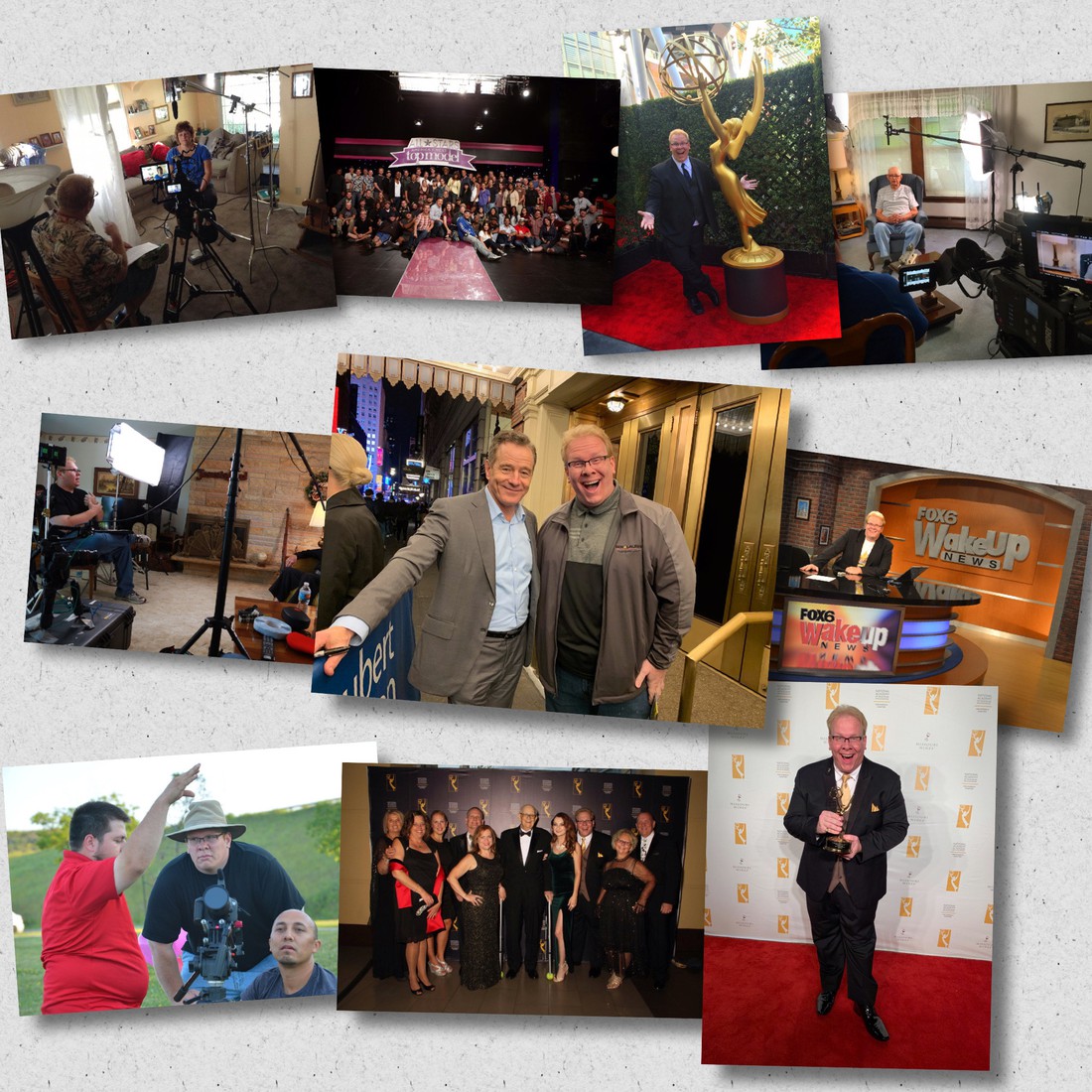 Mr. Seeger's Audio Video Production class had the pleasure of meeting an Emmy Award Winning Director through the Nepris.com platform. Kyle C. Olson spoke to the students in regards to his experience in the film industry and detailed his move from Wisconson to Hollywood. He provided inspiration and advice for beginning filmmakers and delivered an encouraging message.

In high school, Kyle Olson was instrumental in reviving the AV Club and creating excitement about movie making and artistic expression. His journey took him from Milwaukee to Los Angeles and eventually to Branson, Missouri where his film The Last Signal won a Mid-America Emmy Award for best historical documentary.

Olson explained his role as producer and director of the film, which is about a pair of World War II veterans that connect for the first time after more than 70 years. Raymond "DeVere" Johnson, with his daughter's help, posted on Facebook his belief that he may be the last surviving member of the naval ship LST-208. After seeing this post, Olson communicated with the family and found out that Johnson wasn't the last. If not for the Facebook post going viral, the reunion and the documentary would not have been possible.

Mr. Olson described projects from his early years in high school and even detailed a spoof he produced that was based on the James Bond 007 films. Students heard first hand advice about rejection and persistence. Olson's film was passed over by multiple production companies before eventually being made and winning the award. During the discussion he detailed the importance of teamwork and synergy, explaining how a production team needs to have a good working relationship and that a good director is vital. According to Olson, the directors is typically the end all, be all of the production. Mr. Olson's next project is a Netflix film On Tour with Kevin Hart.

Lastly, Mr. Olson focused on the importance of good story telling skills, and how everything and everybody has a story. At one point in the presentation, he had a student pull out a five-dollar bill. A lively discussion ensued over the possible journey of the 5-dollar bill and how something so unremarkable can have quite a story. Several students had the opportunity to ask questions and discuss different projects, especially their documentary about the Elkhart Education Foundation Reading Ride. Mr. Olson has volunteered to mentor and will schedule another meeting with the students towards the end of the project. Kyle Olson definitely inspired and engaged the students today.

Kyle C. Olson is an award-winning producer, director, and storyteller. He has traveled the world while working on world-class productions, and has had the pleasure of working with some of Hollywood's biggest stars. Oh, and he won his first Emmy Award at age 30.

He has worked on numerous television shows, including ON TOUR WITH KEVIN HART, THE FOUR, AMERICA'S NEXT TOP MODEL, DANCING WITH THE STARS, and BEN & LAUREN: HAPPILY EVER AFTER -- just to name a few. On each of these shows, Kyle bring new talents to the table -- often wearing more than one hat for a production. He has had extensive and diverse experience working in production, casting, and serving as a director and producer.

Kyle brings a level of energy to his craft that is fresh, dynamic, and invigorating to all he works with. In 2019, Kyle's latest documentary, THE LAST SIGNAL, received the Mid-America Emmy Award for "Best Historical Documentary". In 2018, the film received the title of "Best Documentary" at the Normandy WWII Film Festival in Normandy, France - an honor bestowed by the cast of the hit HBO series BAND OF BROTHERS.

In 2015, Kyle was the recipient of the Milwaukee Press Club Award for "Best Documentary" for his directing work on LETTERS TO ASHLEIGH - a movie about senseless violence and how communities rally together after tragedies to help families move forward with life as they know it.

Olson has previously been honored with a Crystal Pillar Award presented by the Academy of Television Arts and Sciences -- the Producers of THE EMMYS -- for his work with the MILWAUKEE SUMMER ENTERTAINMENT CAMP, a program he founded for Middle and High School children to learn more about the ins and outs of show business.

If you'd like to collaborate on an upcoming project, don't be afraid to reach out! 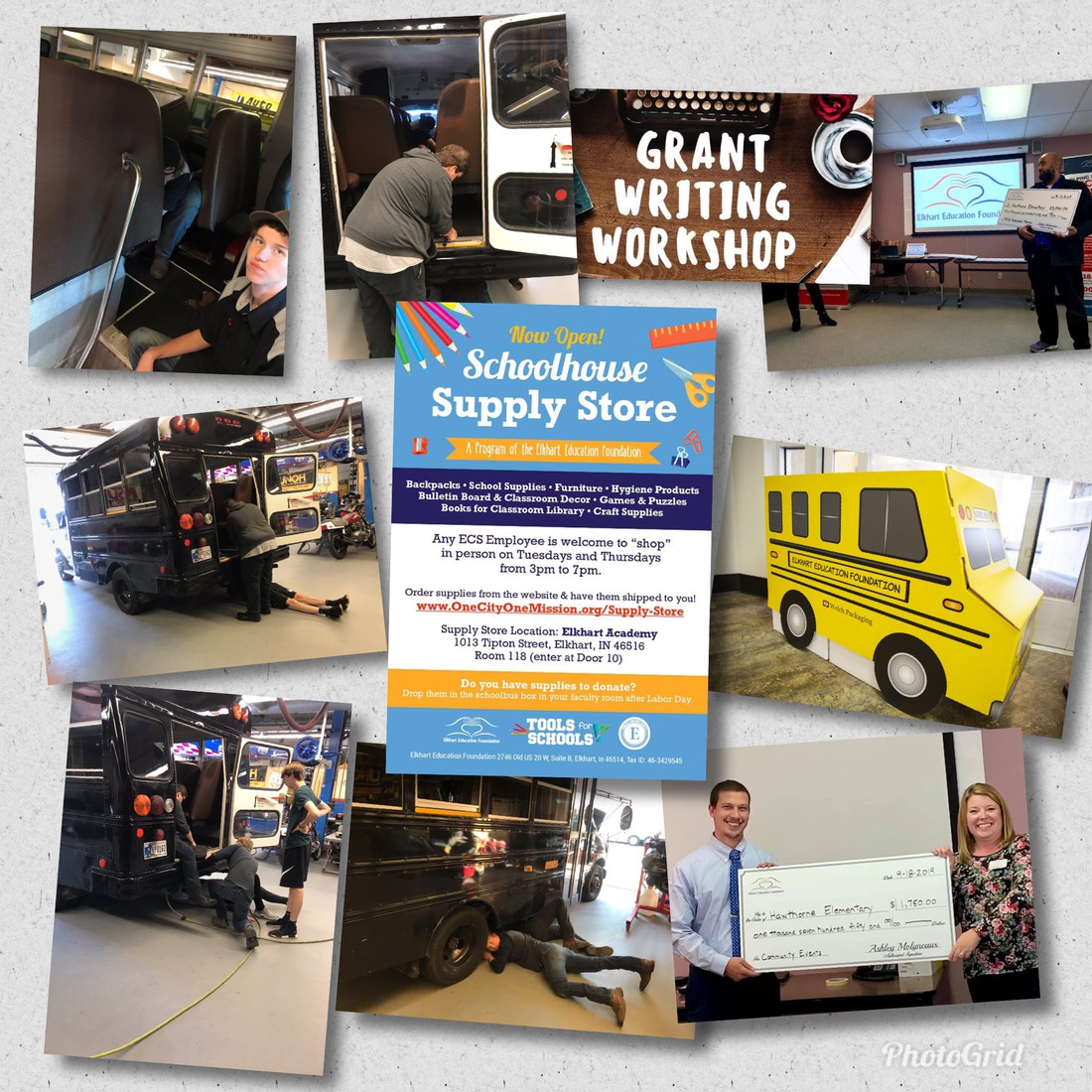 EEF partners with the EACC on the Reading Ride Project

The Elkhart Education Foundation and the Elkhart Area Career Center are teaming up to renovate a mini bus for the Reading Ride project. The mini bus will become a mobile reading resource center that can travel around to different locations and connect with students through activities that support language arts.

The Elkhart Area Career Center students will focus on preparing the bus for service as the vehicle is moved from station to station over the next several weeks. Below is a list of programs at the EACC that will be assisting with the project and a short description of what they are doing to contribute:

Small Engines - The bus will begin with Mr. Gortney's small engine class where students will help with the demolition of the interior and the installation of a PA system.

Auto Technology - The mini bus will enter Mr. Hostettler's shop where students will work on the bus to make certain that it is road ready and safe to operate.

Precision Machining - The precision machining class will fabricate book shelves and other items that will be installed in the interior of the reading ride.

Welding - Mr. Kraus and his students will assist in the fabrication of the book shelves and will assist with welding items that will add to the functionality of the interior.

Early Childhood Education - Mrs. Gingerich and her students will create supporting activities and other materials to be used once the vehicle is operational.

Audio/Visual Productions - Mr. Seegers and his students will create a video documenting the progress and highlighting student efforts on the reading ride project.

Commercial Photography - Mr. Wiard's students will provide updates to promote the program and provide photography to be used for the vehicle wrap.

Graphic Design - Ms. Kosar's students will create the wrap for the exterior of the bus.

More details about the Reading Ride and the program's implementation will be available soon.

The EEF serves the Elkhart community as 501(c)(3) nonprofit, tax-exempt philanthropic organization of citizens who share the common vision of encouraging innovative educational opportunities and enhancing education activities not funded by tax dollars, while promoting educational excellence for all.

For information about the impact of the EEF on the elkhart community please click on the following link: EEF IMPACT REPORT

To make a contribution to the EEF please click on the following link: EEF CONTRIBUTIONS 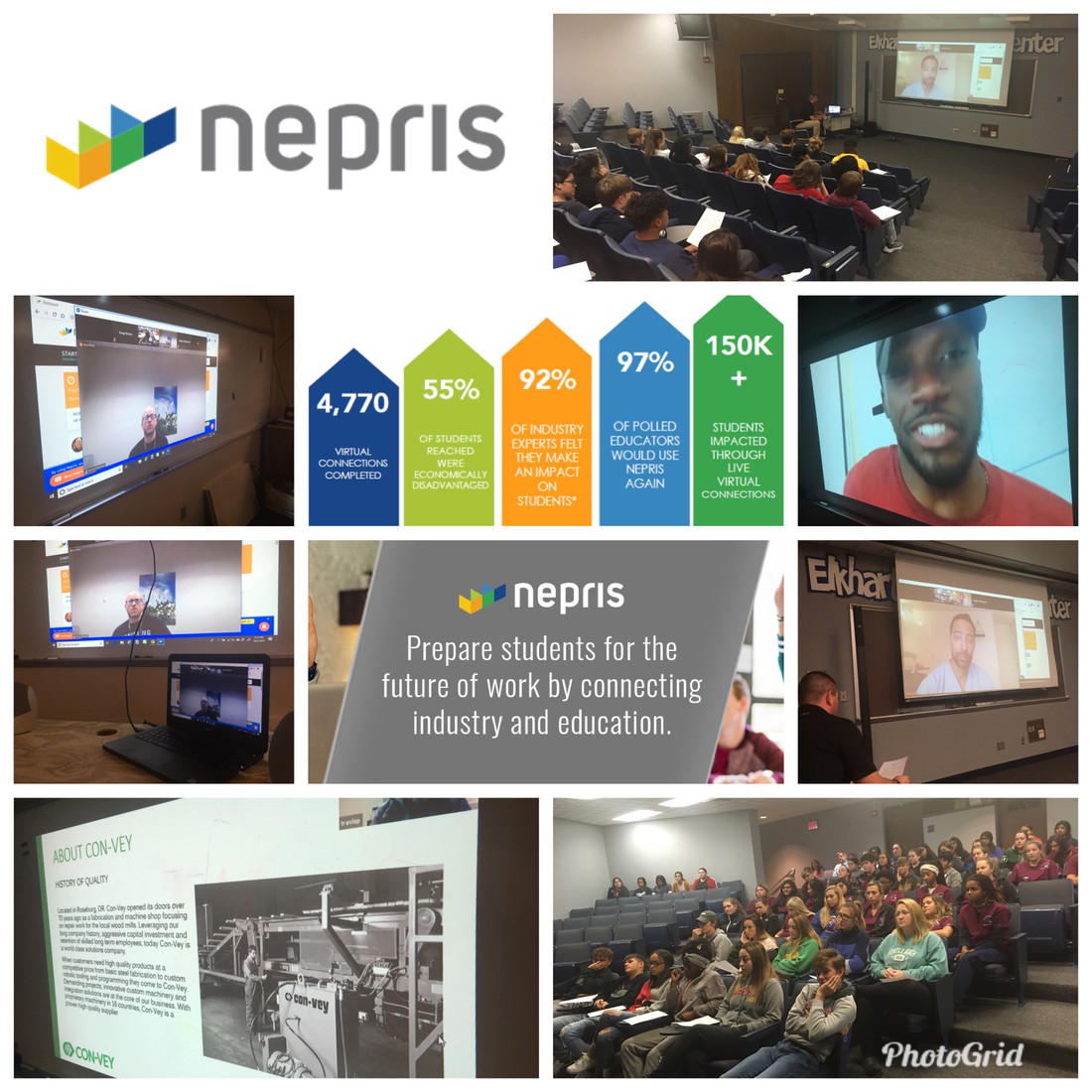 EACC Connecting industry to Every Classroom

The EACC is now connecting every classroom to industry through the use of the Nepris platform. Nepris connects educators and learners with a network of industry professionals, virtually, bringing real-world relevance and career exposure to all students. Nepris also provides a skills-based volunteering platform for organizations to extend education. Since the beginning of october, the EACC has participated in over ten sessions which include industry chats and guest speakers. Students have had the opportunity to interact with sports doctors, scientists, welders and manufacturers and more sessions are planned for the near future.

Nepris has created a system based on based on the following three principles:

Teachers can pick a curriculum topic or student project and Nepris finds and invites the right industry professional to show how the topic is applied in their work, to help guide students with their projects or to evaluate final student deliverables. Every student has an opportunity to submit questions and take part in the discussion. Every professional has a proven framework to guide them towards productive classroom discussion. Each virtual session is recorded so everyone can benefit from this session.

Students gain early exposure to high tech professionals and related job skills so they can connect what they learn in the classroom to real people and real careers that they can aspire for. Nepris platform can help integrate this kind of exposure into the classroom on a regular basis instead of just once a year, on career days! For companies, we make skills-based volunteering a reality.

Introduce students to places and people who can inspire them. We make it easy for everyone to connect with great companies, good leaders, role- models and mentors, around the world! It takes just one connection to be inspired and we are making these connections possible everyday!

For more information on Nepris and how they help with bridging the gap between school and industry, click on the following link: Nepris Website 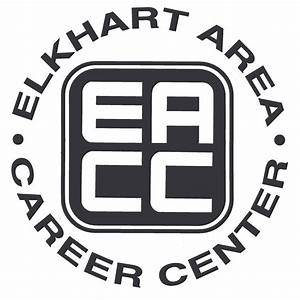 Facebook @ElkhartEACC
The Elkhart Area Career Center (EACC) serves juniors and seniors from 12 Indiana school districts and one Michigan school district totaling 16 high schools both public and private. Traditionally over 1000 high school students enroll in 31 half-day programs at EACC and have been since 1972.
2424 California Road, Elkhart, IN, USA gstover@elkhart.k12.in.us 574-262-5650 elkhart.k12.in.us/eacc/