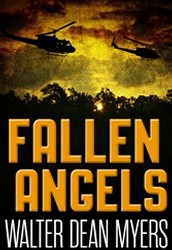 "Fallen Angels" is a book about a 17 year old African American boy from Harlem, named Richie Perry. After graduating high school with grades good enough to send him to college but lacking the money, Perry enlists in the army and is sent to Vietnam. Upon arrival in "The Nam" as it was called, he befriends Harold Gates or, as he is better known, Peewee. He also becomes acquainted with another young man who goes by Jenkins. He strongly believes that because of a medical profile on his knee that he won't have to engage in combat. But, after his profile failed to send to his new base he is sent on his first patrol in the jungle. On this patrol one of his close friends, Jenkins is killed by a landmine. Perry is deeply disturbed by this and begins to wonder if there really is any moral to the war. Throughout the course of the book Perry witnesses more brutality and watches as more of his comrades fall. Perry then begins to seriously question why he and his friends are even really there. 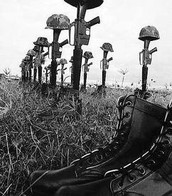 Could you survive the grueling months of war in Vietnam?

"My father used to call all soldiers angel warriors," he said."Because usually they get boys to fight wars. Most of you aren't old enough to vote yet." (Myers 25)

The way this novel fits into the coming of age genre is through Perry's change of heart towards the end of the story. When he enlisted in the army he did it just because he really had nowhere else to go. He was asked once by another soldier why he signed up to which he replied, "It just seemed like a good idea at the time". But as the book unfolds Perry soon began to realize that the war he was in had no true point. In his eyes he saw it as a pointless conflict. When he watches Jenkins die is when this "coming of age" process begins. His death leaves a deep impression on Perry, as does his Lieutenants death. But Perry's true, full transformation comes when he has to write letters to Lieutenant Carrols wife and another soldiers parents. Perry tells this other soldiers parents that he died valiantly in the line of duty, when really he died because their new squad leader exposed them on a patrol, and Turner died as a result.

Grab a book with thousands of other readers and embark on the journey through Vietnam with Richie Perry.

Received 4 out of 5 stars by Barnes and Noble book store.