What is media literacy?

When you turn on a television, computer, app, etc.… what do all of these have in common? That’s right the first thing you usually see is news or something dealing with the media. Most people assume it only relates to news stations broadcasting news to the people watching, and years ago television, newspapers, and a few other sources were the only ways to access the media. Today the media follows you everywhere, thanks to Facebook, twitter, and things along those lines. It deals with anything from celebrities to new world record, it accounts for anything and everything that holds the interest of the viewers or users. People determine what the media is about for a lot of it. If there is no interest in the people, there is no media to some degree.

In this day in age there is so much media and especially now social media to take in and read. App after app is being developed to grasp and hold the interest of the social users. Watch out, if you blink you may miss a lot. That’s why it is so crucial to be “media literate” in this day in age. This means being able to filter out the important information that interests you from the boring stuff that bores you. You must balance this source of media and that source of media, to figure out the truth and just exactly what all is going on. There are so many different perspectives when it comes to media, I believe that why there is so much of it, it is everywhere and will not go away.

Jaguar in the commercial for their cars, which aired during the 2014 super bowl, communicates to viewers that their cars are exclusive and only people that want to feel “bad” will purchase them. Jaguar promotes the F-Type by showing an evil villain drive away in the car, being chased by a helicopter. Jaguars attempts to get viewers to imagine themselves driving the car so that they can feel a sense of exclusivity. This commercial uses an evil tone which rich people who like fast luxury cars.

According to local news channel 3.5, 37 people died Monday because of marijuana complications. Monday was the first day new pot laws took effect in Colorado and so far this new law isn’t off to a high start. Most of the victims suffered from drug overdoses, smoke inhalation, and cardiac arrest.

Many victims are still being hospitalized as we speak. Lance Stigenhimer, a local doctor said “This is unlike any disease I’ve seen before and it’s just spreading like wildfire. I myself use marijuana and will keep using it because it doesn’t affect me yet.” Experts say the death toll will rise into the hundreds or maybe even thousands if a law is not passed shortly to stop this deadly outbreak. Many citizens are now asking, “Why did we legalize marijuana?”

Last summer I experienced wakeboarding for the first time. Wakeboarding was unlike anything I’ve ever done before. I loved everything about the experience from the smell of the boat fumes to the sense of freedom on the water. Being able to learn how to stand up effortlessly, only by using the sheer power of the Yamaha engine astonished me. Watching the board take flight and onto the top of Lake Lanier lifted my soul to the heavens. As I watched the water part as my liquid force glided across the smooth sheet of glass, I knew I had fallen in love with a new hobby. There’s nothing like having great friends cheer you on as you go beyond the wake as do spin around and jump side to side. But the best part of all is just simply gliding along the smooth lake and having the wind blow through your hair. This is truly where I love to be. 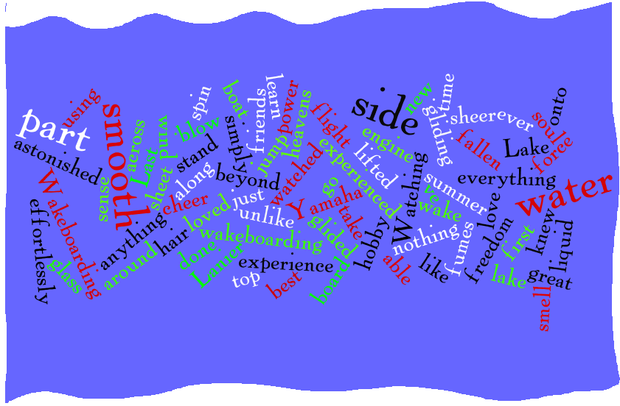 I was not a fan of the book 1984, yet I understood the message and it made sense like no book has before. First off the ending was terrible; it left that feeling in your stomach to the question that you still don’t know the answer to. After such a long, sad, and lonely plot line, why couldn’t Winston have escaped, or started a revolution against the government? That’s what I would’ve liked to see, but I guess that would’ve been against the moral of this book. I think George Orwell just picked the easiest and most realistic ending possible, and for that reason I don’t like him as an author. I like authors who use their imagination to the most extreme and the ending just didn’t reflect that aspect. Also Orwell used way too much fluff and unnecessary details that didn’t matter what so ever and I don’t like that. 1984 was on the boarder of almost going too far in criticizing the government and wetting this book into the category of books that only crazy people read and believe. Some aspects of the book, yes absolutely is crazy and won’t happen, but a few aspects yes it maybe could… maybe, hopefully not. The most important thing I took away from this book is that you will truly always be in control of your thoughts and actions; it’s up to you how long before you let others control them. Oh yeah, and big brother is watching… 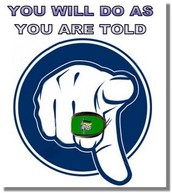 Big Brother is watching and you will listen as he says 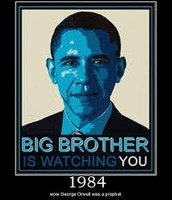 An up to date version of 1984 would look like this. If Orwell is right it's underway right now

The media literacy class I took this year was like no other I have in the past. Although there was a sufficient amount of work I thoroughly enjoyed this class. Unlike most of all my previous core classes, I actually understood and took away a specific point from this class. I really hope this class continues to stay in place as opposed to British Literature as to years past. This class has opened my eyes and changed my opinions on many new topics I otherwise wouldn’t have taken into consideration. For example all the personal information that you give away online is being used in some kind of way to keep track of you. The general message I got from this class is be careful what you do online, someone is always trying to keep track of what you do, and lastly they government’s actions are only becoming more relatable to a dystopia. Some of my favorite things we did in this class were watch V for Vendetta, 6 word memoirs, and general fun online work. In years past language arts classes have been all about DGP, worksheet after worksheet, books, plays, and boring repetitive assignments. Now don’t get me wrong this class had a fair share of boring assessments but that’s just part of the business I guess. If I could change one thing about this class it would be reading the book 1984. That was the absolute most obnoxious, repetitive, boring book I’ve ever read, but it made me think. I understand there was a point to be made, but there could’ve been a much shorter video or alternative assignment to get that point across. I’m not a fan of fluff which is why I don’t enjoy most books so for that reason I believe that messed with the flow of this class. Please keep the online aspects in this class and please move the end of the year project towards anywhere else except the end of the school year, it sucks and kills a good bit of the respect I had for this class. Please keep the days where real life issues are discussed in class and we all just talk about realistic current events without assignments. Thanks for not doing summer reading!