Yonatan is using Smore newsletters to spread the word online.

Get email updates from Yonatan:

The Hunchback of Notre Dame

The Hunchback of Notre Dame

During the 1482 Festival of Fools in Paris, Quasimodo, the hunchback of Notre Dame, is elected the King of Fools for being the ugliest person in Paris.

Pierre Gringoire, a philosopher, tries unsuccessfully to get the crowd to watch his play instead of the show. The Archdeacon Claude Frollo appears and stops the parade and orders Quasimodo back to Notre Dame with him. When Pierre searching something to eat he admires the graceful beauty of Esmerelda, a gypsy street dancer, and decides to follow her home. After rounding a corner, she is suddenly attacked by Quasimodo and the Archdeacon. Pierre rushes to help her but he is knocked out by Quasimodo as Frollo runs away. Later that night, a group of beggars and thieves are about to hang Pierre when Esmerelda comes forward and offers to save his life by "marrying" him.

After a few days,Quasimodo was sentenced for 25 lashes beacuse he tried to "steal" the gypsy girl. After Quasimodo got his punishment, Frollo wants that Esmerelda will hung in the central square of the city beacuse she is a witch.(In his opinion)

For tomorrow, Esmerelda is sentenced to death,and at the last moment Quasimodo is beating all of the guards who kept the square,and taking Esmerelda to the bells tower.

At night,when Esmerelda is safe,she thanks to Quasimodo for his rescue.Quasimodo promes her that he wont leave her forever,until she can be safe alone.After a few days,the beggers decided to invade into Notre Dame to save Esmerelda from Frollo and the Quasimodo. At midnight,the army of beggers are trying to break the walls of Notre Dame while Quasimodo drops on them rocks because he thinks that the beggers wants to kill Esmerlda.

Pierre gets into the Cathedral by a ladder. While Pierre goes upstairs,Frollo takes Esmerelda from Quadimodo and hung her before someone will save her.When Pierre found Esmerelda it was too late,she was already dead,when Quasimodo realized that,he took Frollo and jumped with him from the top of the Catherdral.

Quasimodo and Esmerelda were buried without stone marks on their graves. 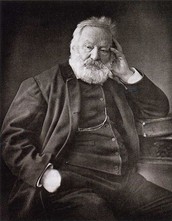 Victor Hugo is a celebrated French author known for his poetry and his novels.

In 1831,he published one of his most enduring works.(The Hunchback of Notre Dame)

This was most celebrated work to date,and paved the way for his subsequent political writing.

Hugo remains one of the giants of French literature.Although French audiences celebrate him primarily as a poet,but he is better known as a novelist for in a English speaking countries.

The Hunchback of Notre Dame. Quasimodo is an abandoned child left at Notre Dame and adopted by the Archdeacon, Claude Frollo.

He won the Fools compatition because of his ugliness.He has a giant humpback,one of his eyes sees and he is also deaf.

His heart is pure,and this purity linked to the Cathedral itself and to Esmerelda,when he said to her that he will take care of her for ever. Actually,the bells of Notre Dame are the only communication that he has.

Paris enjoys Quasimodo's singing while at the same time they are detesting from his ugliness.

why am i feeling connected to quasimodo?

Quasimodo is my favorite and loved character because I felt in many sections of the book his feelings. For example,when he got the 25 lashes on his back,I almost cried because I could feel the shaming that he felt when he got those. Another example is when he told Esmerelda that he loves her and she was "cold" to him,I felt his shaming,his lack of confidence,his self-abnegation and so on...

I think that Victor Hugo tried to transfer the feelings that Quasimodo felt in extremism,I think the purpose for this was to make us feel like the other side,feel like the weak guy and to accept him like everyone else.

Esmerelda is a beautiful gypsy girl. Esmerelda had a goat, its name was Djali. together they are doing street dancing and magic tricks in Paris. Esmerelda had long black her and green eyes. Pierre fell in love with her,at the day that he realized that,he follows her home and tried to save her from Quasimodo and Frollo but he was beaten down by Quasimodo.Late at the same night Esmerelda Saved Pierre from hanging by marrying him.

Frollo the Archdeacon thought that she is a witch and her goat can talk with the devil so,he tried to kill her by hanging in the central square of the city but he didnt succeed.

After Esmerelda was taken to the Cathedral by Quasimodo,Frollo find her,caught her and hung her as fast as he could,Pierre tried to save her but it was too late...

Pierre is a phillosopher. He fell in love with Esmerelda,and she marries him for saving his life after he tried to save her(By the beggars law,men who is married cant hung).

Pierre joined to the army of beggars and tried to rescue Esmerelda from the Cathedral,but it was too late for him,Frollo hung Esmerelda seconds before he reached her.

WHY dO I RECOMMEND to READ THIS BOOK?

The story about "The Hunchback Of Notre Dame" makes you once, to laugh,the other time makes you feel sadness and rage and sometimes excitment.

This story makes you understand how it feels to be deferred by human been.

This is a very thrilling story,I read the whole book in a couple of days.

Finally,I recommend to all of the people I know read it!

Yonatan is using Smore newsletters to spread the word online.