from the New York Times Online

By The Associated Press

ISSAQUAH, Wash. (AP) -- When concerns about marauding cougars rise, wildlife experts offer reassurances: The typical cougar is a shy creature that avoids people and prefers to eat deer rather than pets or children.

So much for typical. Now consider the cougar that ate Wes Collins' dog:

It emerged from the forest behind the Collins house one evening in May and zeroed in on Sandy, the family's 50-pound Labrador mix. As two of Collins' children watched from the doorway, the cougar chased Sandy around the house and cornered her by the back deck.

Clamping its jaws around the dog's neck, the cougar dragged Sandy 50 yards into the woods. There it gnawed on her head and shoulder, buried the rest for later, and stretched out for a long nap.

That was enough to shake up the Collinses, but what happened the next day was what troubled state game warden Rocky Spencer. He and a hunter arrived with two hounds, pessimistic about their chances of tracking the cat. Collins' house sits on 5 acres outside Issaquah, where Seattle's suburban sprawl gives way to the forested Cascade foothills, so the cougar had plenty of escape routes to wilder country.

But this cat had no intention of fleeing. The hounds came across it just 100 yards into the woods, and the snarling cougar turned on the dogs with a fury that sent both back to the truck to lick their wounds.

Forty minutes later, hunter Ed Mahany returned with a friend and two fresh hounds. They figured that this time, surely, the cougar would have headed for the hills. Instead, the hounds found it just a few hundred feet away. Mahany's partner shot it, and the cougar, a 145-pound male, crawled off to die in a hollow stump that the neighbor's kids play in.

``I've had dealings with upwards of 100 mountain lions, and that was the most aggressive I've seen,'' Spencer said.

``This cougar wasn't sick or injured,'' Mahany added. ``It obviously didn't concern him to be around people, and dogs were just lunch.''

Once hunted nearly to extinction, cougars are on the rebound around the West. It's an ecological success story that's causing both celebration and nervous glances over the shoulder. Worries are growing that the secretive cougar, a.k.a. mountain lion, puma and panther, is getting too comfortable around the booming human population that now shares its habitat.

Of the 10 fatal cougar attacks on people recorded since 1890 in the United States, half were in the past 10 years. Nonfatal attacks also are on the rise, as are reports of cougars preying on pets and livestock.

Being chewed by a cougar, or even seeing one in the wild, is still rare. But a recent string of attacks and close calls has forced Westerners to reconsider what is ``typical'' cougar behavior:

--A 6-year-old boy was jumped by a cougar on July 31 while hiking with about three dozen other campers on Marshall Mountain near Missoula, Mont. The cat pinned Dante Swallow with its paws and bit into his neck, but was pulled away by a camp counselor. The boy survived with scratches and puncture wounds. The cat slunk away and was later tracked down and killed.

--In Colorado, cougars have attacked three hikers in the past year, including 10-year-old Mark Miedema, killed last July in Rocky Mountain National Park. He had hiked a few minutes ahead of his family on a well-traveled trail; they arrived to see the cougar dragging him away.

--In Olympia, Wash., a cougar prowled a residential neighborhood for a week in April, hiding under blackberry bushes and preying on pets until wildlife agents tracked it down and shot it a few blocks from City Hall.

The list goes on: Since February, cougars have been spotted lounging on a porch in Villa Park, Calif., munching house cats near Kalispell, Mont., and wandering near an elementary school near Reno, Nev. In each case, the cougar was shot by officials fearing further problems.

With every encounter that hits the evening news, the jitter factor rises among the general populace, until sometimes it seems as if there's a predator behind every tree. Wildlife officials say they've received complaints of ``cougars'' that turned out to be deer, yellow Labrador retrievers or even house cats playing in the grass.

``There's a little public hysteria about this,'' Spencer said. ``That's not necessarily a bad thing. It gives us an increased chance to educate people about lions, so they can learn to live with them.''

But how, exactly, do you live with one of North America's most adaptable predators? A cougar can sprint 40 mph and leap 20 feet into a tree. With its great yellow eyes and keen nose, it can see and smell people coming long before they know the cougar is there.

Westerners have argued for years, with no consensus yet, over how to coexist with an animal that occasionally displaces humans at the top of the food chain.

In Idaho, Montana, Wyoming and New Mexico, recent complaints from ranchers and deer hunters about too many cougars prompted game officials to relax cougar-hunting rules.

The West's more urban coastal states, meanwhile, have grown more protective of the big cats. Washington voters banned the use of hounds for recreational cougar-hunting in 1996, the same year that Oregon voters rejected a challenge to their state's ban on hounds.

In California, a ban on all sport hunting of cougars has helped to double their numbers since 1972 to the present estimate of just over 5,000 animals. Even after cougars killed two California hikers, voters rejected a 1996 proposal to reinstate hunting.

``People have a more holistic approach to sharing the land, not just with cougars but with bears and other animals once considered varmints,'' said Brooks Fahy, executive director of the Predator Defense Institute in Eugene, Ore. ``I think people like knowing these animals are out there.''

Even in cougar-friendly California, however, there are limits to interspecies goodwill. Hunters note that an average of 100 ``problem'' cougars are killed each year in California -- about twice the number killed annually by hunters before the 1972 ban.

Are cougars becoming bolder in the absence of hunting? Many hunters, and some game officials, believe that's the case. But Fahy disputes that theory, saying the dramatic rise in both cougar and human populations explains the increase in encounters.

There's also no evidence that hunting puts the fear of people in mountain lions, Fahy says. He points to British Columbia, which has the continent's highest rate of cougar attacks despite heavy hunting.

Beier, the Arizona researcher, said he wouldn't expect hunting to noticeably reduce the number of cougar attacks unless the killing reached a level not allowed since the early 1960s, when bounties were paid for dead cougars.

Even that drastic step, unlikely given today's sympathy for predators, would not stop the march of homes into the West's wild hills nor divert the flood of visitors into the region's parks.

Three years have passed since Wes Collins moved his family into their house in the woods. Until the cougar attack in May, they enjoyed the parade of wildlife from their back door.

Now the four children, ages 8 to 14, are not allowed to play alone outside. Collins bought a can of pepper spray, and he cleared trails out back ``to make our presence known,'' he said.

Collins said he likes wildlife, but he values the safety of his children more. He'd like to see Washington rescind its new ban on hunting cougars with hounds.

``You either control the population of cougars or start killing humans,'' Collins said. ``There's not enough room for both of us to survive.''

EDITOR'Sm NOTE: David Foster is the AP's Northwest regional reporter, based in Seattle.

1) How would you sum this story up to someone who haven't read this yet?

2) How are they trying to stop attacks?

1) How would this info affect how you or your family when going to an outdoor event?

2) Based on the info in the story how do you think will most likely happen in the future?

1) What is the authors purpose in writing this article?

2) What is your opinion on how they are dealing with the attacks?

1) I would sum this story up by saying that it is an article about cougar attacks. Also how cougars are becoming a major problem. With more and more attacks on humans and pets.

2) To me they aren't really trying to stop the attacks. They kill the cougar that attacks the people, but there is just another one to take its place.

1) If my family knew more about the attacks and where they are happening, we would pack, such as a gun, even more then we do now.

2) Based on the info my guess is that we will do nothing more to stop the attacks. There are to many animal lovers to even care about human lives dieing or getting hurt, but there's lots of us and little of them right? So it's all right not to care.

1) I think the authors purpose is to show how unsafe it can be while out in the woods. Also to say your not safe from them even at your home or in the city..

2) My opinion on how are they are dealing with it is that they are not even doing anything, but killing the cougar that attacks someone witch is good. I say we need to be able to use hounds again, That's my opinion. 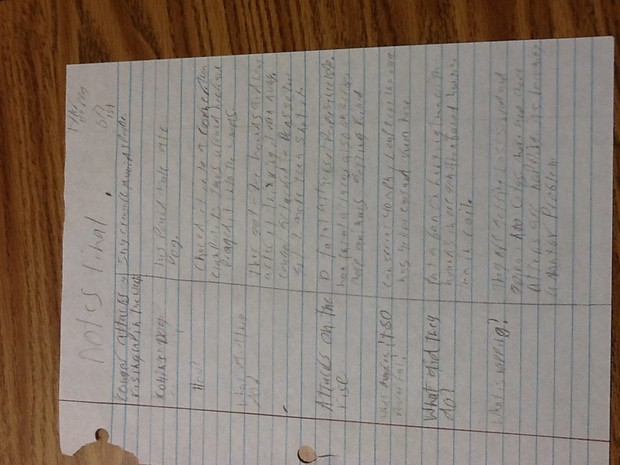 Follow Tyler Herzog
Contact Tyler Herzog
Embed code is for website/blog and not email. To embed your newsletter in a Mass Notification System, click HERE to see how or reach out to support@smore.com