News for the week of August 26th

News for the week of August 26th

Welcome back to the Fork Shoals Library!

You may notice a few changes this year in the FSS Library. We have new carpet, a couple of new displays, and some gorgeous new murals! Take some time to visit the library, chat with Ms. Knight and Mrs. Meredith, and see how you can help make this year a great one in the library!

Did you read this summer?

Did you "Dig into Reading" this summer? Don't forget to turn in your summer reading log to Ms. Knight by Friday, September 6th. (The summer reading program lasts through Labor Day.)

Book of the Week: Wonder by R.J. Palacio

Wonder tells the story of August Pullman, a boy who’s about to enter fifth grade. This will mark the first time Auggie has ever been at school with other kids. He’s been homeschooled up until now, and he’s not entirely certain he wants that to change. Auggie’s nervous about how the kids at school will react to his face. See, Auggie was born with a facial deformity–for lack of a better word–and he doesn’t exactly look like most kids. But everything else about him is perfectly normal. He’s a good student, he’s funny, he loves Star Wars (a kid after my own heart), and, most of all, he just wants to belong somewhere. But will anyone be able to look past his appearance and really be Auggie’s friend?

As it turns out, there are a couple of kids who befriend Auggie, but Auggie worries that he’s some kind of charity case to them. Nothing about middle school is easy–especially when your face might as well be a target for bullies–but it’s a lot easier when you’ve got a couple of friends who have your back. Even though Auggie has doubts (sometimes justified) about his friends on occasion, he’s forming lasting relationships with people who see him for the wonderful person he is.

Read Wonder to discover how one very special kid can change the minds, hearts, and attitudes of those around him and turn an entire school–even a community–into a model of kindness. This book gives me hope that the world we live in can change for the better. I truly believe that every person, no matter his or her age, should experience this book.

Wonder is a nominee for the 2013-2014 South Carolina Children's Book Award. 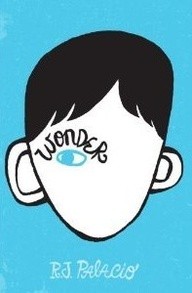