Biology2 is using Smore newsletters to spread the word online.

Get email updates from Biology2:

thin, flexible barrier around a cell; regulates what enters and leaves the cell

strong layer around the cell membrane in plant, algae, and some bacteria

in cells, large structure inside some cells that contains the cell's genetic material, DNA, and controls the cell's activities

materials inside the cell membrane- but not including the nucleus

granular material visible within the nucleus; consists of DNA tightly coiled around proteins

small particle in the cell on which proteins are assembled; made of RNA and protein

cell organelle that stores materials such as water, salts, proteins, and carbohydrates

the mass of a solute in a given volume of solution, or mass/ volume

diffusion of water through a selectively permeable membrane

noting or pertaining to a solution containing the same salt concentration as mammalian blood.

movement of specific molecules across cell membranes through protein channels 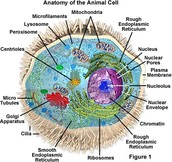 Biology2 is using Smore newsletters to spread the word online.