1. Homes in the Middle Ages

1. Homes in the Middle Ages

Period of time after the Fall of Rome. Middle Ages lasted over 1000 years.

The King was the ruler of large areas of land and sat atop of Feudal Society.

Peasants, also known as Serfs worked on the land for Church Officials and Nobles. They preformed back breaking tasks.

Peasants- Were told what to do to build the Castle for the King. Or built their own house for their families.

"During the Middle Ages, kings and wealthy noblemen built fortified stone castles for protection from enemy attacks. In England, the castles were surrounded by high, thick walls and deep, water-filled trenches called moats. The hall was the principal room of the medieval castles. The castles also contained the lord’s private rooms, a kitchen, a pantry, a wine cellar, and perhaps a chapel. Fireplaces could be built in their walls, and crude chimneys appeared in castles during the 12th century." ( Encyclopædia Britannica, Inc., 2014.)

For security purposes, windows, when they were present, were very small openings with wooden shutters that were closed at night or in bad weather. The small size of the windows allowed those inside to see out, but kept outsiders from looking in.

Many peasant families ate, slept, and spent time together in very small quarters, rarely more than one or two rooms. The houses had thatched roofs and were easily destroyed. (Learner.org) 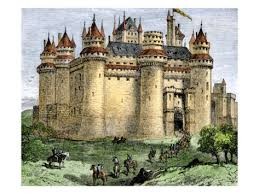 1. What did the Peasants use for roofs?

2. If the house did not have windows what did they use?

The houses in middle ages, remind me of a couple different things. The peasants lived in houses that look like barns that farmers use today. Castles remind me of mansions, that some people live in.