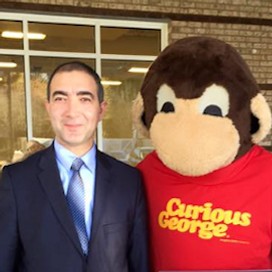 Get email updates from Kenan:

https://www.youtube.com/watch?v=wkjG_Y8tMI4
WASHINGTON, May 6, 2019 - Georgia's top middle school volunteer of 2019, Seth De La Pena, 13, of Fulton Science Academy Private School, was honored in the nation's capital last night for their outstanding volunteer service during the 24th annual presentation of The Prudential Spirit of Community Awards. Seth along with 100 other top youth volunteers from across the country – received a $1,000 award and personal congratulations from award-winning actress Viola Davis at an award ceremony and gala dinner reception held at the Smithsonian's National Museum of Natural History.

Award-winning actress Viola Davis congratulates Seth De La Pena, 13, of Fulton Science Academy Private School on being named Georgia's top middle school youth volunteer for 2019 by The Prudential Spirit of Community Awards. Seth was honored at a ceremony on Sunday, May 5 at the Smithsonian's National Museum of Natural History, where he received a $1,000 award.

The Prudential Spirit of Community Awards program, sponsored by Prudential Financial in partnership with the National Association of Secondary School Principals (NASSP), named Seth Georgia's top middle level youth volunteers in February. In addition to his cash awards, he received an engraved silver medallion and an all-expense-paid trip with a parent to Washington, D.C., for four days of recognition events.

Seth, an eighth-grader at Fulton Science Academy, started a service group that provides clothing and school supplies to students in need at an elementary school in an area of the Philippines affected by a volcanic eruption early last year. Seth's parents immigrated to the United States from that country and took him to visit when he was younger. "I came back home with a heavy heart thinking of the unfortunate kids my age," said Seth. "My parents' constant reminders not to waste food and be grateful for what I have convinced me to spend my time not on games or otherwise pointless tasks, but instead on running an organization that would provide for the misfortunate."

Seth recruited other students at his school to help him begin an information and fundraising campaign in support of students at Tinago Elementary School in Albay, Philippines. The effort got off to a slow start, but after the Mayon volcano erupted and displaced many nearby residents, Seth's group collected approximately $1,000 and many boxes of clothing, and then delivered school supplies and clothing to young students at the elementary school. "The smiles on their faces after seeing their new items and the pure innocence of their lives were heartwarming," he said.
https://www.youtube.com/watch?time_continue=8&v=ry5tVCUHlpY

"We're impressed and inspired by the way these honorees have identified problems facing their communities and stepped up to the challenge to make a difference," said Charles Lowrey, chairman and CEO of Prudential Financial, Inc. "It's a privilege to celebrate their leadership and compassion, and we look forward to seeing the great things they accomplish in the future."

"These students have not only done important work in support of people in need – they've also shown their peers that young people can, and do, create meaningful change," said Christine Handy, president of NASSP. "We commend each of these young volunteers for all they've contributed to their communities."

The Prudential Spirit of Community Awards program was created in 1995 to identify and recognize young people for outstanding volunteer service – and, in so doing, inspire others to volunteer, too. In the past 24 years, the program has honored more than 125,000 young volunteers at the local, state and national level.

For more information about The Prudential Spirit of Community Awards and this year's honorees, visit http://spirit.prudential.com or www.nassp.org/spirit.

The National Association of Secondary School Principals (NASSP) is the leading organization of and voice for principals and other school leaders across the United States. NASSP seeks to transform education through school leadership, recognizing that the fulfillment of each student's potential relies on great leaders in every school committed to the success of each student. Reflecting its long-standing commitment to student leadership development, NASSP administers the National Honor Society, National Junior Honor Society, National Elementary Honor Society, and National Student Council. Learn more at www.nassp.org.

Prudential Financial, Inc. (NYSE: PRU), a financial services leader, has operations in the United States, Asia, Europe, and Latin America. Prudential's diverse and talented employees are committed to helping individual and institutional customers grow and protect their wealth through a variety of products and services, including life insurance, annuities, retirement-related services, mutual funds and investment management. In the U.S., Prudential's iconic Rock symbol has stood for strength, stability, expertise and innovation for more than a century. For more information, please visit www.news.prudential.com.