Reflection on Faith and Fatalism

I've been listening to James speak this week on the opposites of fear and faith, and I realized that's not really where my personal struggles lie. At the end of the service last night, he asked us to pray "without giving God an out," and that really struck me. I realized that oftentimes my faith borders on fatalism. It is important to be submissive to God's will, but if you take that too far, where is the place of the prayer of faith?

So, I went home last night and did some research. I actually found quite a bit on this topic, but I just want to share a few thoughts from one particular article I read by Nate Jenkins.

"Christian fatalism is easily overlooked because it often cloaks itself in the pious language of Meekness, that holy attitude that never grumbles against what God asks it to do, or where he asks it to go, or why it must be the one to do it. Meekness is contented compliance to God’s will, and as such, is a good thing.

Our Lord makes it patently clear in his teaching that Meekness is to be exercised when dealing with God and man, but never when dealing with the devil. We are instructed to yield ourselves to God, but are told to resist the devil. We are to turn the other cheek to our physical enemy, but are never encouraged to take any cheek from our spiritual foe. Because wisdom discerns the kind of affliction received, it also differentiates the kind of afflicter."

Sometimes we fail to look for the cause of our trials and sufferings. We live in a world that is under a curse and we know that Satan is at work. That means that we have to be discerning in deciding when to be meek and when to be bold.

"Faith is that element that makes Christianity a fighting religion. And like two gladiators in the arena, Faith and Fatalism are locked in a death match. The symptom of Fatalism is resignation. It sees the suffering of sickness and demonic oppression as inevitable, and thus becomes compliant with the evil one who is working to kill mankind. It believes God must have a reason for putting us through the fire of affliction, and quietly accepts it. The Fatalist’s passivity becomes his or her eventual destruction.

But the hallmark of Faith is hope. It believes that what is, is not what has to be. It knows that with the Lord is infinite possibility for good and unlimited potential for blessing. It hopes for the best because it believes the best of God. Faith comes to heaven with cries for blessing while it fights on earth against the curse."

So, what's the difference between faith and fatalism? Hope. Belief that God is good. Not being afraid to come to Jesus as the friend which he has called us. Love.

Titus 3:4-6 "But when the kindness of God our Savior and His love for mankind appeared, He saved us, not by the righteous deeds we had done, but according to His mercy, through the washing of new birth and renewal by the Holy Spirit. This is the Spirit He poured out on us abundantly through Jesus Christ our Savior." 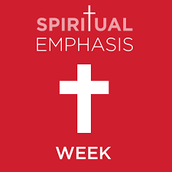 Thanks for all of your help in monitoring behavior, praying with kids, and praying for this week. It was a great encouragement to me to see several of you praying with individual students last night. I've heard news that one of our students accepted Christ for the first time. Praise the Lord! The finale of SEW is tonight, but the work of the Holy Spirit continues. Please continue to pray for your students, share with them, and be willing to mentor those who ask.

Fearless Faith in the Classroom

With this week being SEW, I want to pause on discussing thinking tasks to apply the SEW theme to our classrooms. We’ll return to the active learning topics next week!

What does it look like for us as teachers to be filled with God’s Spirit to be able to be fearless in our classrooms? I’ve been considering this question as I’ve listened to Pastor James speaking this week. As I think about this, I consider what has made me, in my role as a Bible teacher, afraid. Here is a list of fears that I’ve struggled with in my Bible classroom:

-Fear of offending my non-Christian students

-Fear that in spite of my best efforts, my students will be turned off to God

My first year teaching Bible 12 I had a class mostly comprised of atheists. To make things even more difficult, I had 19 guys and 6 girls. It was not an easy group to say the least. The above fears were very real to me, and I had many an anxious moment wondering how things would work out. Amazingly, I saw many students come to faith that semester, in spite of what I thought I was seeing on their faces during class. Since then, no semester of teaching Bible has been easy but each one has been so fruitful. The fears are always there, and there is never a week when it doesn’t take courage to keep going. Here’s what I’ve been learning about how to face these fears:

-Surprisingly, I’ve discovered that my non-Christian students are not as easily offended as I had imagined. If I show them love and respect and say that I understand that we are all from different faith backgrounds, but I’m going to go ahead and share from my beliefs, they are actually incredibly receptive to what I have to say. I think they are more turned off by people who seem wishy-washy and intimidated. They respect a faith that is genuine, as long as it is shared with love and respect.

-One of the greatest lessons I’ve learned is not to take what I see on students’ faces as what they are thinking/feeling. Time and time again, I’ve found that students who I think don’t care about what I’m saying actually do care, and they are being touched even though they don’t show it.

To close, I want to encourage you that the harvest at our school is indeed plentiful. Students are truly hungry for the One who satisfies. In all the busyness of teaching, it’s easy to forget that we are here to help our students come to know the true and living God. Nothing else that we do is more important. Be fearless through the power of His Spirit!