Meet the People of Cuba--meet their nurses!

Meet the People of Cuba--meet their nurses!

Please note that this itinerary is subject to constant improvements and will change in our effort to provide the best trip possible! 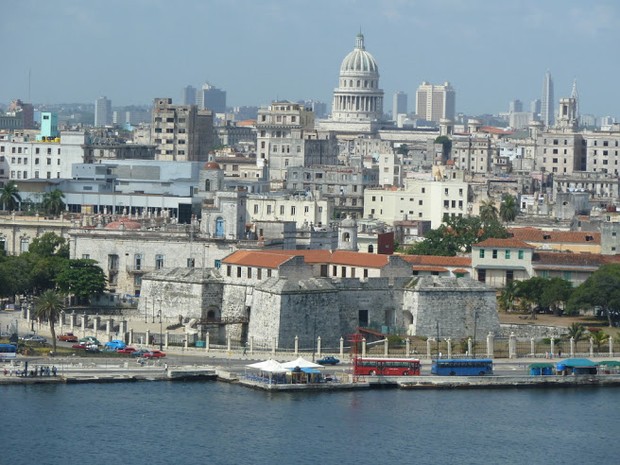 Rated by The Guardian as the number one Paladar in Havana, This paladar, is in a space that is cluttered and eclectic on the bottom floor of an early 20th-century mansion. Piles of old books are stacked atop beautiful old furniture; black and white photos jostle for space with antique record covers and bullfighting posters, while a selection of clocks, religious artefacts and, even a full-size zebra pelt, add to the mix. The food is Cuban-Creole. This is not, however, the bland standard cuisine found in many state restaurants. The dessert menu is expansive: pudding San Cristóbal (eggs, fruit, milk and almonds) is excellent while the fruit tart and rice puddings are pretty passable, as well as the omnipresent flan. We will have a chance to speak with the Chef and the owner of the establishment to discuss food and new opportunities in the food industry in Cuba.

Tour Old Havana on foot, walking between the four main plazas that comprise Cuba’s first UNESCO World Heritage Site. Start at Plaza de Armas, the site of the oldest Spanish fortress in the Americas, the 1519 locale of the first mass in Cuba, and the massive Baroque seat of government, known as Palacio de los Capitanes Generales. Continue to Plaza de San Francisco de Assis and Plaza Vieja, where we will visit artists galleries and historic buildings and get a sense of the structure of the colonial city. Wind through historic streets spanning 5 centuries of historic architecture and end at Plaza de la Catedral and see the Baroque cathedral.

This is one of the next generation of paladares in Havana. Its next-gen because it is a combination eating establishment, bar and night-club as well as an artwork in process established and conducted one of the leading new social practice artists of Havana, Kadir Lopez. Unlike many of Havana’s paladares the food here is light and quick with creative tapas being the best description. The bar offers a variety of Cuban and international spirits and the entertainment is high art music and performances. The place itself is an art work crafted by Kadir. Overall this place gives you the idea that you are in a 1940’s New York City art house looking out at the Old Havana street scene of today.

The Taller was established in 1962 by a small group of artists lead by Orlando Suárez, a muralist whose initiative also helped found the Superior Art Institute. Mr. Suarez was supported in this effort by the Chilean Poet Pablo Neruda and by Che Guevara who applauded his efforts to create a center where all artists of the City of Havana can go to produce prints. The Taller is more than a workshop. It is a studio, a school and most of all, an art institution that preserves and develops the sophisticated art of printmaking with relative freedom of spirit and form. While at the center you will see artworks produced there and have a conversation with the artists present about their works, and about life as an artist in Havana.

You will visit the Cuban collections in this striking modernist building which was completed in 1953 and exemplifies the combination of sculpture with architecture in Cuban mid-century modernism. The Palace of Fine Arts houses a collection of Cuban visual art that spans 4 centuries.

Lying on the border of Old Havana and Centro Havana municipality, this area is notable for containing numerous architecturally and historically significant buildings that exemplify mid-19th c. urban center. We will begin at the 1877 Central Park, then walk along the 1772 Prado Promenade, see the Moorish-style Inglaterra Hotel, oldest in the city, the 1929 Capitolio building, which is modeled on the US capitol, and the Bacardi building, the best example of tropical Art Deco.

Calling Atelier contemporary is like calling Havana a little rundown: true, but enough of an understatement as to miss the point. The large main room is decorated with sparse modern lines, inside a typically idiosyncratic Vedado mansion. Two balconies have boundless cushions for the outdoor lounge. An antique hob outside, old sewing and adding machines inside make the place retro yet not old. The food changes every day, every week, hence the handwritten menus.

After breakfast - Visit Vedado, Plaza and Modern Havana districts. The morning starts with a visit to Plaza de la Revolucion or revolution Square followed by a visit of the Vedado district which highlights the architecture of the area, drive by the maine monument and the Malecon, Coppelia park the Havana Libre hotel and the Rampa district. The group will visit the farmers market, and other places of interest in Havana where they will have the opportunity to interact with the Cuban people.

Visit Havana's Cementerio de Colon. Laid out between 1871 and 1886, the cemetery includes more than 500 mausoleums, chapels and family vaults, sculpted in bronze, granite, marble and limestone by leading Cuban and European artists. Learn about the relationship between this cemetery and the Catholic Church in Cuba.

An outdoor thatch roof restaurant located in the residential area of Miramar, a few minutes from downtown Havana. A flavor created and maintained by the family tradition since the first restaurant was founded on the El Aljibe farm. The specialty is the El Aljibe Chicken, which combines roast chicken with French fries and fried plantain, delicious black beans, white rice, salad and, for dessert, national sweets.

Brand new show-cooking style paladar with a spectacular view of the Havana seafront. 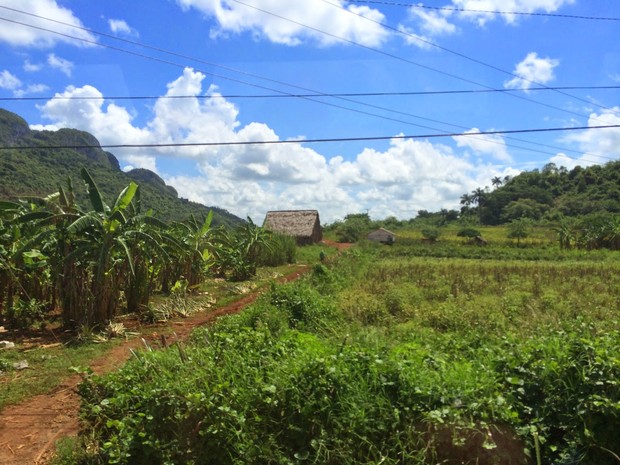 Enjoy this all day excursion to Vinales Valley located in Western Province of Pinar del Rio. a UNESCO world heritage site Vinales Valley has one of the most beautiful views in Cuba, the mogotes are limestone mountains that come out the valley floor. Take a boat ride through a mogote and enjoy a typical Cuban lunch while enjoying rational country music.

This cave was discovered in 1920 and it was outfitted to be visited in the 1940’s, paving its floors and electrifying it. This large grotto was thus named because the local indigenous Guanahatabey people used it as graveyard and a refuge during the Spanish conquest period, the main reason why remains of this native culture were found inside. This cave is 1700 meters long (5100 feet) but only one third of it is visited, combining a short walk and a motorized boat ride through marvelous limestone formations.

Take the ferry from Old Havana across Havana Bay, to visit the historic City of Regla.

When local artists Manuel (Manolo) Diaz Baldrich and Ernesto Quirch Paz began teaching art workshops in the neighborhood school in 2001, they had no thoughts of starting community development project. They quickly moved the workshops into the streets, and there the seeds of Muraleando (literally "muraling" or mural-making) were sown. The murals that started springing up throughout the neighborhood were a natural outgrowth of the art classes. The murals depict fanciful celebrations of Cuban life. In a country where nothing is disposable and everything is useful, broken typewriters, old telephones, tire rims, wrought-iron chair parts - all were fair game to weld and paint and turn into sculpture. Muraleando also helped address community fragmentation with a recurring Peña Comunitaria, a block party when streets are blocked off, tables and chairs are set up, and young and old arrive to share in the festivities. Invited artists include musicians, dancers, singer, actors and poets from local, national and international realms. The Peña also gives emerging and aspiring artists from the neighborhood a venue to demonstrate their talents. Food is served, of course, neighbors and visitors come together in a cultural celebration.

This Paladar serves meals that could easily make you think you are dining at one of the best restaurants in New York or LA. But as soon as you look up at the scenic tropical scene you will realize you are eating at one of Havana’s best new paladares.

This Alley is located in the working class Cayo Hueso quarter that serves as an open-air Afro-Cuban Religion Sanctuary, the work of local artist Salvador Gonzalez who has adorned its walls with evocative Santeria murals paying homage to religious cults and currents of African origin. It hosts the famous Afro-Cuban rumbas that take place every Sunday afternoon.

[3:00 pm] - Afternoon is open to revisit places of appeal

We will be picked up by a fleet of classic American cars and ride through Havana in style to dinner tonight.

Anyone who has been to La Guarida will find it difficult to disagree that Enrique and Odeisys have managed to create their own magical place. It oodles a cosy atmosphere with soft lights, fine table linen, German silver cutlery, candles, Cuban music and good jazz. The effect is magnified by the entrance from a run-down Central Havana street. The building, originally known as La Mansión Camagüey, shows its former grandeur from the magnificent wooden entrance door through the marble staircase up the two flights of stairs to the restaurant itself. Fidel’s famous explanation of [why he said] Patria o Muerte (country or death) is a photographer’s dream on the way down. For visitors to Havana, La Guarida has become a must experience. This is deservedly so for while it may be busy, expensive and has been discovered before, it retains its intimate (somewhat formal) charm and provides a quality dining experience with sensitivity and professionalism. 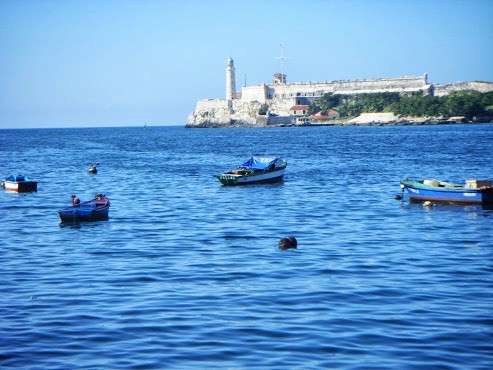