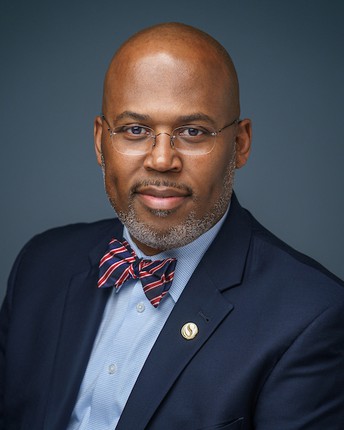 The district’s ACE committee met Wednesday, Feb. 24 for its regular monthly meeting, which provided an informative discussion around the district's budgeting and fiscal planning process. But, there was something clearly different about the meeting and ACE members simply could not contain their excitement when Superintendent Dr. Rodney Watson appeared in the virtual room. They greeted him with a round of applause for earning the National School Foundation Association Superintendent of the Year award. Dr. Rodney Watson thanked everyone for their support and quickly pivoted to checking in with everyone else to ensure they were doing as well as possible after returning to work from the devastating winter storm.

Dr. Watson's usual segment, “What’s on My Mind”, followed with his perspective on the latest news from the Texas Education Agency (TEA) updates regarding the 2021 legislative session and developing decisions on standardized testing. “It’s important for all of us to understand the latest rulings and behind-the-scenes decisions as we think about and express our comfort or disdain regarding those decisions,” he said. Specifically, he noted that students may not be required to take the STAAR test if they attend school remotely; however, there are still assessment graduation requirements that will need to be met. Therefore, understanding the details of the rulings and the underlying implications for students will be an ongoing priority, and Dr. Watson pledged to keep ACE updated as more information is released.

Even during this unprecedented time, testing data provides important insights for the district as it works to meet the needs of every student. “I believe parents and teachers need to know where their students are,” Dr. Watson said. “We should not be left in the dark or ill-informed of how our students are performing or guessing what their needs are.”

Even with low-stakes, low-accountability testing, the Superintendent recognized the range of reactions this topic brings forth and opened the dialogue for feedback. One of the first questions centered around the use of the data beyond parent and teacher information, and Dr. Watson quickly allayed the concerns related to the test results being used for any evaluative purposes. Additionally, ACE members recommended a unified message that will communicate the urgency of the assessments and students taking them seriously, without causing undue fear about the transition to a full online testing platform. Dr. Watson acknowledged the comments, “I feel confident that we’ll get the word out with the appropriate attention it deserves.” 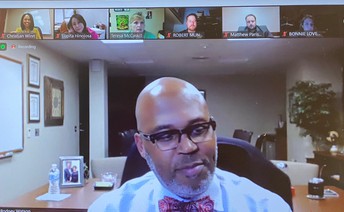 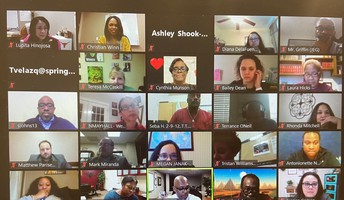 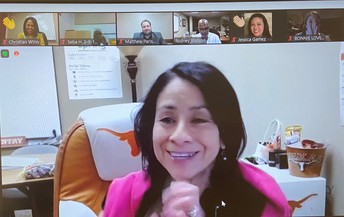 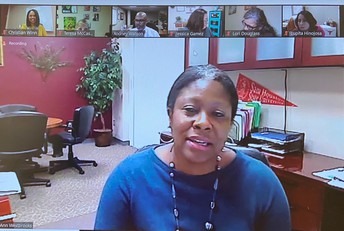 Ann Westbrooks, Spring ISD’s Chief Financial Officer, provided a detailed look at the district’s budgeting and fiscal planning process. Described by Dr. Watson as the person “who makes talking about finance fun,” Ms. Westbrooks is a veteran in the district’s financial services office, with more than 15 years of experience in multiple finance-related positions leading up to her current role at the helm of the district’s finance department.

Noting the ongoing nature of budgeting, Ms. Westbrooks emphasized the yearlong budget planning process that includes the Board's annual adoption through the implementation and monitoring of the budget. For starters, she clarified the fiscal year timeline, which begins on July 1 and ends on June 30 of every year. She also described the general fund as the district’s operating budget, which is made up of state, local, and federal funds. State revenues account for nearly 55 percent of the general fund, which is primarily calculated using the average daily attendance of the district’s enrolled students. Local funds, which are the second largest portion of the general fund at 43 percent, are primarily based on tax dollars. Lastly, federal funds, which consist of approximately 2 percent of the general fund are generated from Medicaid-eligible services that qualified students receive.

Additionally, Ms. Westbrooks explained the detailed aspects of the general fund appropriations. “When you look at this graph, it is evident that we are in the people business,” she said, highlighting that 87 percent of the general fund expenditures are allocated to payroll costs. The second-largest cost center is contracted services which includes utilities cost. She noted that all employees have a role in reducing the district’s energy usage, which can help lower these costs.

The Q & A segment of the budget presentation sparked the interest of the ACE members. A summary of the inquiries along with Ms. Westbrooks’ response to each follows:

Has the district declared a hiring freeze? The district has not taken this step but is closely evaluating every vacant position to continue ensuring that all district dollars are well-spent.

How has the current enrollment impacted the district’s state revenue? This year has consistently revealed approximately 2,000 fewer students than the projected enrollment for 2020-2021; however, the district remains fully staffed on the projected student enrollment figures. Therefore, immediate adjustments are being made to help close that gap, including closing vacant positions. In addition, each central office department has undergone a 5 percent budget reduction in all non-salary accounts. Staffing adjustments are being made through attrition as well. An estimated 400 employees separate from the district each year, and these positions will be evaluated against need and enrollment.

What role can teachers play in the budget? Teachers play a major role in the budget. First and foremost, take accurate attendance every day, for every student, in every classroom. Secondly, spread the word about the importance of attendance and its impact on district and campus budgets. Attendance is everyone’s business! Lastly, remain informed of state legislative rulings and the impacts on the local district budget.

Dr. Watson added the importance of every employee “balancing the narrative.”

“We are the face of Spring ISD,” he said, and sharing more of the positive stories of what is happening in the district can make a huge difference in how parents perceive Spring ISD as the best district for their students. 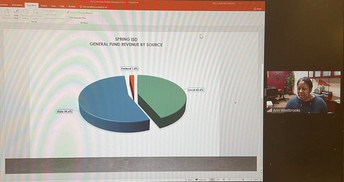 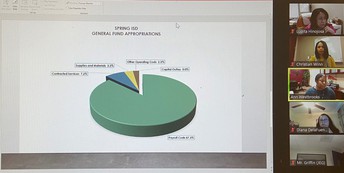 As the district’s Leadership Definition further comes to life in our daily efforts, microcredentialing creates an array of opportunities to align professional development and incentives in meaningful ways. Dr. Matthew Pariseau, Assistant Superintendent of Curriculum and Instruction, provided a detailed overview of an upcoming employee badging and recognition system. Although some parts of the system are still in development, much of the thinking around its purpose and impact have been delineated.

The district’s microcredentialing system aims to:

Several ACE members posed initial questions and provided feedback on the new badging system. “It will act as a visible reminder and allow me to track my development, and it’s already uploaded in Eduphoria, which I like,” one committee member commented. Another ACE member foresees the badging systems as a way to create healthy competition between employees, comparing it to other reward systems that allow group members to earn points, or increase their ranks or status.

When asked about the amount of responsibility the new system will place on the employee to document his or her professional development efforts, Dr. Watson provided clarity: “This system is all about recognizing and celebrating our employees’ ongoing development and impact on student achievement. This is not intended to be a chore with extra work for you to do and I believe you will find the process for capturing your development to be very similar to that which you already do.” Additional updates will be provided over the coming months as this recognition and badging system is implemented. 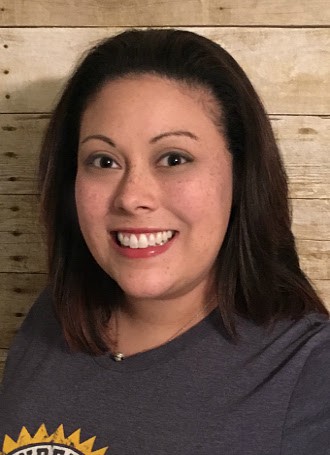 Meet the ACE Member of the Month

For the past nine years, Jessica Gamez has remained a dedicated team member at Spring ISD’s Anderson Elementary School. She served as a first and third grade teacher prior to moving into her current role as the school’s Digital Learning Coach. Ms. Gamez has also served as the Campus Liaison Teacher as well as the Lighthouse Coordinator, grade level team leader, and campus webmaster. When asked about her role as the campus Digital Learning Coach, she spoke fondly of her daily interactions, “I’m responsible for supporting our students, staff, and parents as we navigate the joys and challenges of online learning. I’m passionate about finding new digital tools and strategies to help our students succeed and love working with teachers to implement them in the classroom.” This Jenkins, Dueitt, and Spring High School alum is proud to serve the district that instilled so much in her. “Coming home to teach in the same district I attended as a student has been a very rewarding experience,” Gamez stated.

Regarding her service as a member of the ACE, Ms. Gamez appreciates the opportunity to be a voice for her campus staff, students, and families. It also offers a unique privilege to learn more about new initiatives and changes throughout the district. “I feel that our district administration really does take the feedback we provide at the monthly ACE meetings into consideration and I greatly appreciate that,” she said.

We’re proud to shine the spotlight on Ms. Jessica Gamez for her service to Spring ISD and to the 2020-21 Advisory Committee on Education.

Here’s What’s on the Agenda

The following is a list of the ACE meeting dates and topics of focus for the remainder of the year. The calendar is subject to change if additional items need to be added based on discussions, recommendations, or district priorities. 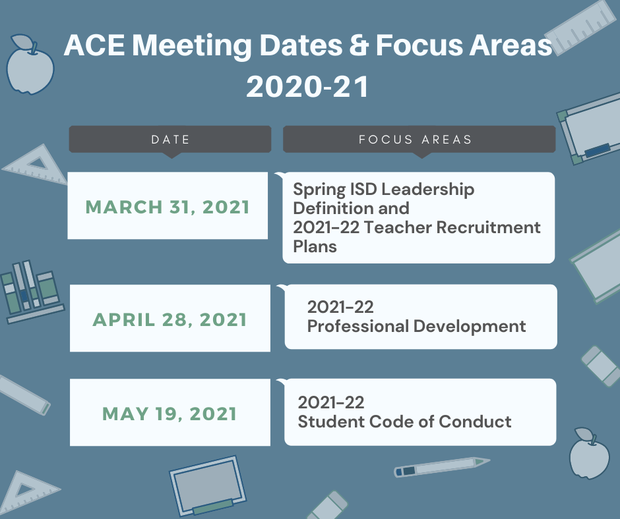 Make Your Voice Heard! Talk to your ACE Representative

Every campus in the district has at least two ACE representatives elected by the staff to serve in an advisory role to the Superintendent. Central office representatives were also elected and serve in the same capacity. Devoted community members, appointed by the Superintendent, serve on the ACE as another integral voice as well. If you want to ensure your views are heard, reach out to your ACE member. Click here to learn who represents you. 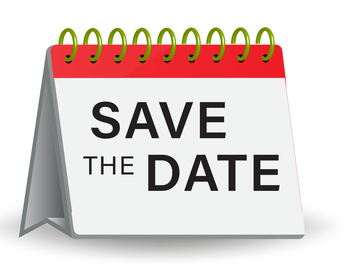 Follow Christian Winn
Contact Christian Winn
Embed code is for website/blog and not email. To embed your newsletter in a Mass Notification System, click HERE to see how or reach out to support@smore.com
close