American Dream and how it relates to The Great Gatsby

American Dream and how it relates to The Great Gatsby

Everyone has prejudice and Gatsby’s prejudice is shown to be the underlying theme of the story. In the book Gatsby is afraid of missing a few details which means that all people are not equal at conception.“I am still a little afraid of missing something if I forget that, as my father snobbishly suggested, and I snobbishly repeat, a sense of the fundamental decencies is parcelled out unequally at birth.”(Fitzgerald,2)This sentence shows the theme of the book and the biases Gatsby already has which contribute to how Gatsby sees himself and what he must do to accomplish equality.

In addition, Gatsby, a rich man who earned his wealth seeks Daisy because of what she represents to him even though Daisy is nowhere near Gatsby's social class which makes Gatsby feel the need to put Daisy on a pedestal even if it means sacrificing himself. Daisy believes that she is entitled to being rich and having that class and uses everyone around her to help herself, ultimately costing Gatsby's life. "Was Daisy driving?" "Yes," he said after a moment, "but of course I’ll say I was. (Fitzgerald,110) Daisy just having committed murder doesn't even think twice to look back and only moves forward for only Gatsby to suffer the consciences showing the true intentions of class and beliefs which connects with the plot.

In conclusion, the book is interconnected in many ways ranging from the plot, character backgrounds, and social problems. I think because of the class being a major issue in the book most of the poor people or born poor people were all killed while the middle class or rich are alive and well. The book talks about how social class can play a bigger role than people have previously thought.

The Journal response is writing on what I believe Nick would have written if he had a diary. I write about chapters 1-3 through Nick's view and how he would explain the situation in his view.

We had walked for hours around the parks. I walked behind Tom and observed their every move. I was so shocked at how close they were. Tom Forced me to come along with him to his girl’s house. What I found was shocking. I froze when we came to the house. There was a man with the woman, not just any man but her husband. The man was awkward but you could tell the amount of control his wife had in him when she asked him to get chairs. While the man went to get chairs Tom and the women flirted and leaned in close to each other this made me feel for the man who didn’t even know what was happening but I also was angry at the man for letting his wife get this far off.

We left the house and Tom and the woman walked with each other as if they were a married couple I walked in disbelief Tom bought the women all kinds of gifts he even spent ten dollars on a dog week’s worth of work but if you're Tom you have money like that. Tom gave the dog to the woman. It was like throwing money in the trash.

The party had started and we all were having a good time drinking the best wine and alcohol. We sat and chatted. The women talked about their men and what they wanted. They often asked me questions but I felt so uncomfortable I answered them to just get them satisfied.

Night had come and I heard a big scream. I saw blood gushing from the woman’s nose. Tom scared looked at me in disbelief…….

The Journal response is writing on what I believe Gatsby would have written if he had a diary. I write about chapters 4-5 through Gatsby's view and how he would explain the situation in his view.

It was a good day. The party that started. Daisy was not too far from where I was. I felt intimidated to come toward here but a sensation passed through my nerves giving me the strangest feeling. Daisy was beautiful through all my time knowing here I had always had these feelings for her. I came to Daisy and I tried to start some conversations with her. Daisy doesn't believe in divorces and this always ponders me and my chances with her. I always stayed up thinking about how I would be able to convince Daisy to be with me. I did the only thing I could, which was to spend money to change her mind first and then I bought a house close to her but then I did more to get her attention.

I would do all I could to get Daisy's attention even if it cost me my own persona. At the party, I tried to start conversations with Daisy and get her to talk to me. I even want her friends to get her to have a conversation with me but it seems daisy treats me the same way she treats her friends. I wish Daisy would just be with me and let me treat her like a queen. I know Daisy doesn't have feelings towards her husband but why does she keep the marriage even when he is not the love of her life.

I hope the best for Daisy and I hope tomorrow will be a better day for me.

The Journal response is writing on what I believe Gatsby would have written if he had a diary. I write about chapters 7-9 through Gatsby's view and how he would explain the situation in his view.

I looked at Daisy as we drove the car my heart bumping out of my chest I felt scared and happy all at the same time. It was only me and Daisy in Tom's car we followed Tom to the location. Tom drove my car but in exchange, I got alone time with daisy, that would be the best bargain anyone could ask for.

When we get to the inn we spend a little time at the location and ultimately decide to leave sooner rather than later. which in my opinion was a big waste of time and money but I did enjoy my time with daisy. I felt I was getting closer to turning daisy into my woman.

We headed back home and the time with her was also well received and I felt at home being with Daisy.

I hope I can make Daisy my woman... 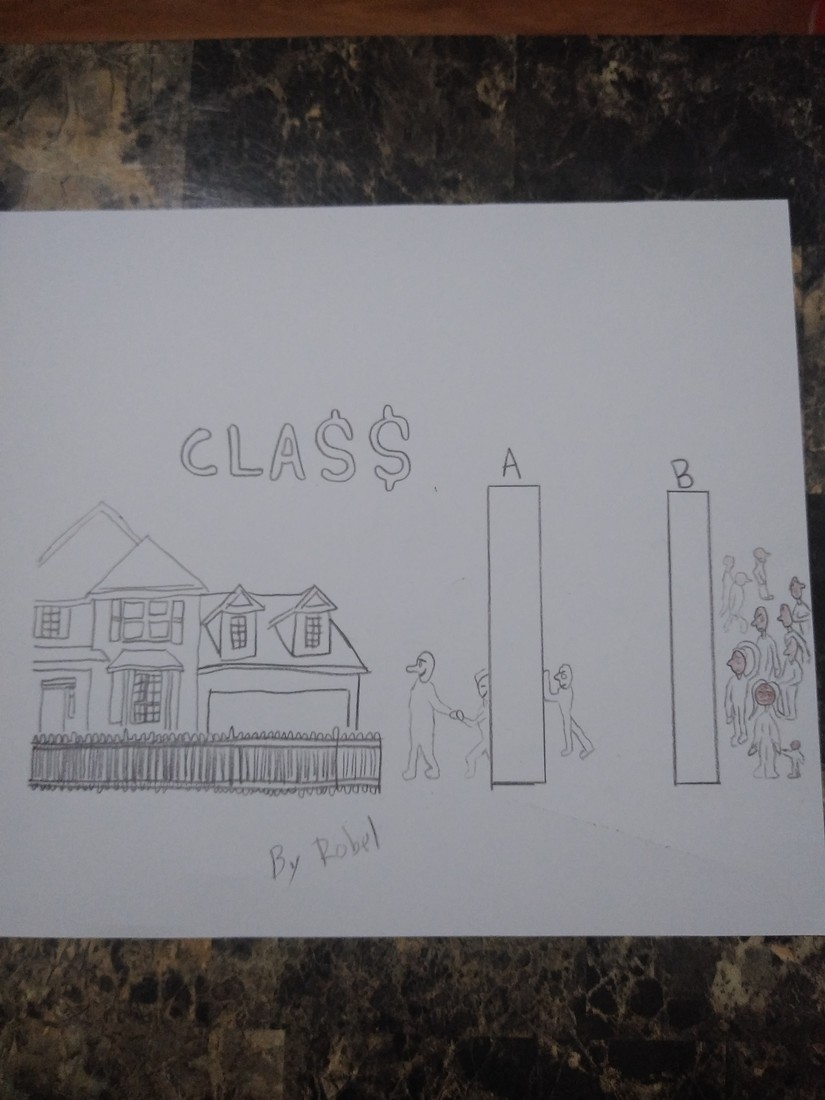 The American dream limit is race and class. In my picture, I draw a white fence, a white house with a white garage to symbolize how white an American dream is and who it is for. I also draw two barriers which are A and B. Barrier A is to keep white Americans that don't have “Old Money” or status away from the American dream and Barrier B is to keep non-white Americans away from the American dream. The picture is the true essence of a white middle-class American. The American dream limit is black Americans, the dream doesn't focus on black Americans and the needs of minorities. American society prevents black Americans and minorities from reaching their dreams by placing more barriers in their ways such as low funding for schools and less funding for their communities ultimately making the community poorer and less productive resulting in the white picket fence dream being reserved for only white Americans.
Embed code is for website/blog and not email. To embed your newsletter in a Mass Notification System, click HERE to see how or reach out to support@smore.com
close