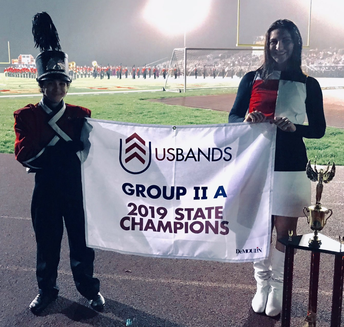 In late August, the Weehawken High School held their annual Band Camp. In the sweltering heat, while their friends were either sleeping, at the beach, or relaxing, the members put in two weeks of 10 hour days to ready themselves for the season. Hours on the unforgiving turf, practicing, marching, sweating. But this group knows no limits, as they have one goal each year...a championship. Anything less is a disappointment. Well there was no disappointment this year.

On Wednesday, October 30th, the Weehawken Marching Band captured the USBands Group 2A State Championship. The band had a score of 85.69 and won captions for Best Individual Music, Best Effect Music, and Best Effect Visual. This was the band’s third consecutive USBands State Championship and 6th overall since 2012. With over 50 students participating, this is the largest the band has been in many years, and over half of the band members are brand new to the activity.

The team continued their march to Nationals, again competing for the first time in a higher group. Although the band did not win the coveted title, they finished 7th out of 15, which is not bad considering the big jump in class. They closed out the successful season with their annual Band Festival, as teary seniors completed their final performance; together for one final time, as champions. 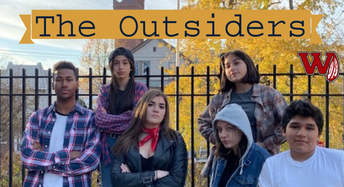 One of the main WHS highlights year in and year out is the Theater Arts Winter performance. Each year the group, led by Tammy Jacobs and Jay Stratton, try to up the performance from the previous year, continuing to set the bar higher with each successive cast. Awaiting Wonderland, and Grease were huge successes, and featured incredible sets and costumes, along with dynamic performances. This year looks to be no different as the group takes on the ever popular classic, "The Outsiders."

The students have been practicing for over two months for the dual-night performances set to take place on December 6th and 7th. Although the period piece is set in 1965, WHS plans to give this gritty drama some 21st century edge, led by veterans Sofia Tauriello and Emil Valdez.

During rehearsals, the students practice lines, work on sound and lighting, help with set construction, and essentially get their hands dirty, learning all aspects of stage development, along with acting. Our budding thespians are being assisted by some talented parents; Meg Carson is helping with costumes, and Gio and Dena Calabrese are building the sets. All in all, The Outsiders should be another hit for the Theater Arts crew. We hope to see you all next month when the lights go down and the curtain drops! 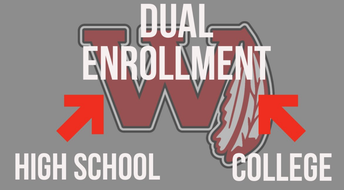 At Weehawken HIgh School we are constantly exploring ways to not only prepare our students for the real world, but to also improve the educational product we provide for them. The goal is to create a challenging and rigorous program that will give students the tools necessary to not only be accepted to college, but to be competitive once there. Sometimes, we at WHS think outside the box for help with this endeavor. That's how Dual Enrollment came about.

One of Superintendent Crespo's first initiatives was to create college opportunities for our students. At WHS you can enroll in actual college classes! Weehawken has partnered up with FDU and Saint Peter's University. Students gain college credit though still taking classes at Weehawken High School. Dual Credit gives college-bound Juniors and Seniors the opportunity to experience university-style learning before they even graduate high school.

Here is the absolute best part; Students pay at an enormously discounted rate to attend. Weehawken High School students are paying $267 per class rather then $3,855 the colleges charge their own students! College education for a fraction of the cost, and the experience and sense of accomplishment that goes along with it. Just another example of the progressive mindset here at WHS. 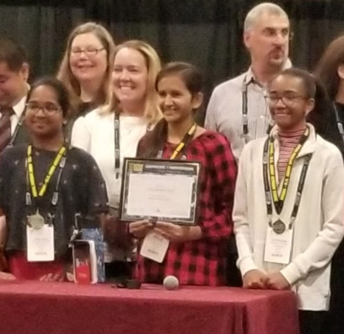 Kathyena Gisomm, Prisha Patel, Kenyaka Tripurana are three newcomers to Weehawken High School, and although they are young they have immediately made their mark here. They recently competed in a STEAM Tank competition in Atlantic City finishing 14th out of 30 teams for a product they invented and are developing.

The story actually began a few months prior as the three young ladies brought their idea to the NJIT STEAM Tank competition. The girls developed a water bottle that joggers can use to hold their cell phone, keys, credit card, etc. They came up with idea, by observing runners struggling with managing these items when training. Before they knew it, an invention was born. So when the competition came up, the decided to "run" with their idea.

The girls split up the task of creating their product. They divided the tasks equally among each other, and would meet periodically during the week to assemble/adjust/tweak their bottle. All of the preparation and time worked, as they really impressed the NJIT judges, who selected them from many, many other schools, to represent WHS in Atlantic City. The girls are still meeting and discussing ways to perfect their product. With their ambition, talent, and drive the sky is the limit. 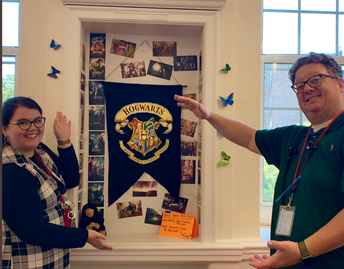 One of the many blessings at WHS is, without a doubt, our dedicated teaching staff. Not only do we have superior educators, but dedicated and caring people; always thinking about their students and ways to improve the school.

After a successful summer Brain Camp experience, Mr. Perry and Mrs. Babcock decided they wanted to start a 7th grade book club to inspire a love of reading with our youngest students. They also wanted to involve our 7th graders with their own activity at school as many clubs are geared toward the high school students. After some think tanking, they decided on the Harry Potter book series because, in the first book, Harry is 12 years old -- the average age of a 7th grader. It's the perfect series that will enable the students to grow along with Harry, Ron, and Hermoine. Thus far, the results have been fantastic!, The group, 11 strong and growing, gets to share their thoughts on the series, spend time with new friends, and, most importantly, read great literature! 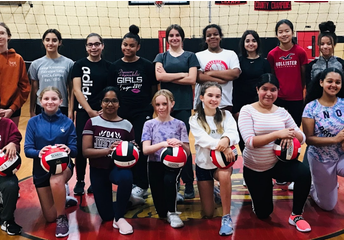 The Weehawken Board of Education recently approved the induction of a brand new Girls Middle School Volleyball team. The fall season was the first time in history that 7th and 8th grade girls had the chance to join, practice, and play on a volleyball team at Weehawken High School. There was a huge turnout for the team, which consisted of 22 regular players between both grades, and was coached by Ms. Safa Abdou, who teaches business, financial literacy, and economics classes at the high school.

The girls showed their determination, teamwork, and fortitude by coming to practices before school two times per week. The junior Lady Indians played their first game away against Cliffside Park Middle School. While we lost, the girls showed great heart and left everything on the court. We are so proud of our very first Middle School team and look forward to their growth and success in the future.

At Weehawken High School, students are always encouraged to get involved and help others. After recently donating blood, a group of students approached administration about running our own blood drive at school. After coordinating with township, WHS was able to coordinate a 12 hour blood drive by partnering up with Vitalant, one of the nation's oldest and largest nonprofit transfusion medicine organizations.

Vitalant exists to help people realize their life-transforming potential by offering convenient blood donation opportunities and sharing their expertise in transfusion medicine. Founded in 1943, they comprise a network of nearly a dozen community blood centers, each with its own rich history and legacy. Vitalant, as opposed to other organizations, keeps all donated blood in the state of origin, so the blood you donate may actually help someone you know.

When all was said and done, 40 units of blood (or Red Cells, as the industry refers to the donations) were attained. Each cell helps to save 3 lives, so as a result of our efforts, 120 lives were saved! Additionally, Vitalant offers scholarships for WHS students for every 50 cells achieved. That, and the lives we saved, are reason enough to organize another drive in the future. 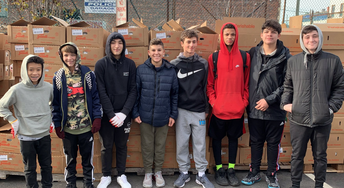 What would most middle school boys be doing on a beautiful Fall Saturday? Playing ball, video games, or sleeping may come to mind. Well, how about unloading frozen turkeys? Few would expect that, but the 8th grade Weehawken Boys basketball team is a little different. Led by Coach Brian Hernandez, the boys engaged in the ultimate team building experience, working hard for the benefit of others.

The boys, in conjunction with Union City HS Junior ROTC, helped the Union City town management distribute 40,000 turkeys to help needy families in North Hudson County for Thanksgiving. Their efforts will help over 100,000 people receive needed food for the holidays. For over two hours, the boys helped recycle boxes and load cars up with turkeys as a team building exercise with the ancillary benefit of bonding time for the boys. A true testament to their commitment, the boys engaged in this exercise only one hour after basketball practice. Overall, it was an important learning experience that will help a lot of grateful families.

Faces in the Crowd 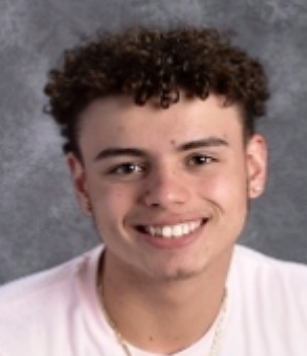 James, a Senior, recently signed a letter of intent to play collegiate baseball at Felician College 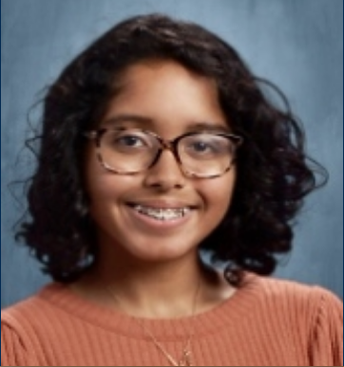 Ivana, a Junior, was recently honored in the Court of Honor by the Scouts BSA, for achieving 1st Class, an exceptional honor 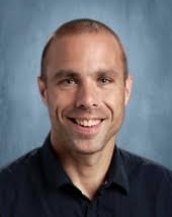 Mr. Fischer, was recently named an Exemplary Educator, by the New Jersey Department of Education. 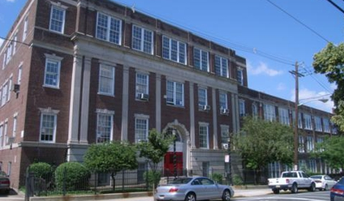