Jerome is using Smore newsletters to spread the word online.

Get email updates from Jerome:

The Attack on Pearl Harbor

The Attack on Pearl Harbor

At just around 8:00 A.M., Pearl Harbor was attacked by Japanese Fighter planes. They destroyed hundreds of airplanes. Thousands of people were killed, with many injured. The attack lasted 2 hours, and the day after, war was declared on the Japanese.

Why did this happen? The Japanese had been at war with China, and America didn't necessarily agree with it. We began canceling trade exports to Japan, leaving them with little resources. This frustrated japan, and so they reacted by bombing our freaking naval base!

However, they did not attack a lot of the on-shore necessities, like repair shops and oil storage. Thanks to this, we were able to get back on our feet pretty quick. So, after 2 years of waiting, we finally entered World War 2. 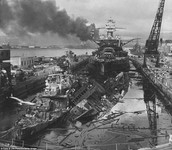 Connect with Jerome Has Swag

Jerome is using Smore newsletters to spread the word online.