Central Idea: Explorers of the past sought discovery, knowledge, and adventure despite challenges and risks.

Back to School with a new Term and a new UOI!

This week, students have launched into UOI #5 with inquiring about explorers and exploration. Students created a concept map to use during the UOI and develop connections as they work through the unit.

Students also explored the significance of the discoveries of early explorations.

They investigated the explorers Captain James Cook, Christopher Columbus, David Livingstone and Roald Amundsen, to identify who they were and what they discovered.

In Vocabulary, students recognized and explained the meaning of adages and proverbs.

Due to my unexpected absence on Friday, the Unit 7-9 Vocabulary Test will now be on Tuesday, April 12th.

Next week, we will be beginning Sadlier-Oxford Vocabulary Workshop Unit 10. Vocabulary words can be found on the websites listed below.

Students presented the book summaries they wrote for the Book Tournament to the 3rd/4th Grade class, as well as their peers.

They were evaluated using a rubric on 5 components.

The winners of this round will be announced this week. Stay tuned!

Najla presents "Whatever After"

Yusra presents "Harry Potter and the Goblet of Fire".

Yusuf presents "Harry Potter and the Prisoner of Azkaban". 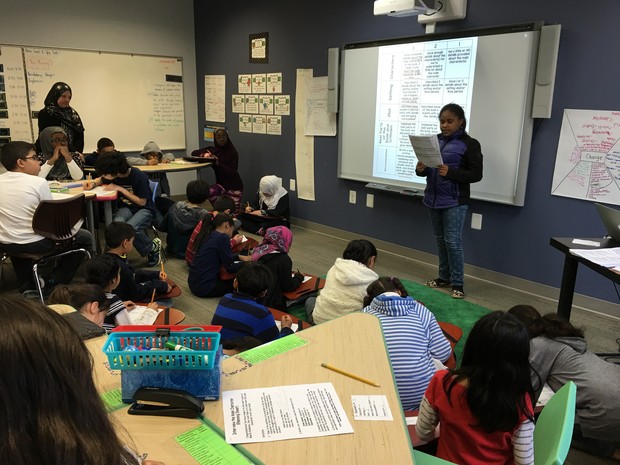 Students continued to work on understanding the meaning of fractions and percents.

Students also reviewed composite and prime numbers, representing decimals on a hundred chart, addition and subtraction with word problems, finding the quotient of decimal problems and multipication of decimals through the Weekly Math Homework.

Students continued the unit on Expressions and Equations.

Students were able to:

Summative assessment is on this Monday, April 25th.

Students are encouraged to use vocabulary words in writing, as well as incorporate them into conversations. It is important for students to study the words regularly. You can also access games and other resources at the websites below.

The beliefs children have about intelligence, effort, and struggle impact the choices they make about learning.

In 1978, Stanford psychologist Carol Dweck made a profound discovery: children who believed their intelligence could grow did better in school, and better in life. She called this basic belief about intelligence “mindset.

Children with a growth mindset tend to see challenges as opportunities to grow because they understand that they can improve their abilities by pushing themselves. If something is hard, they understand it will push them to get better.

In order to develop students' growth mindset, we have been using Class Dojo to learn about this idea and develop strategies. You can view some of the videos in the links below.

www.khanacademy.org
Learn for free about math, art, computer programming, economics, physics, chemistry, biology, medicine, finance, history, and more. Khan Academy is a nonprofit with the mission of providing a free, world-class education for anyone, anywhere.