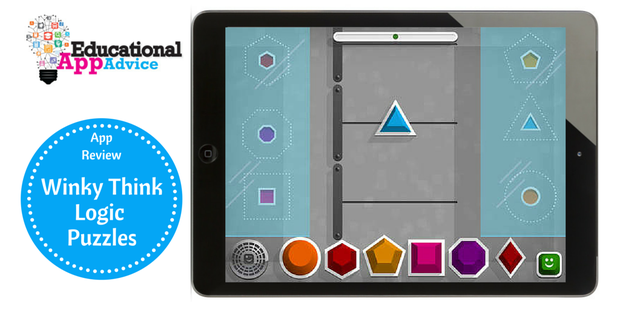 Winky Think Logic Puzzles is a fun and engaging app that can be used to help develop children’s problem-solving and reasoning skills. It is a very intuitive app that does not require any verbal or written instructions. Instead, users will immediately get the concept and be on their way to solving the first of the 180 puzzles.

Within each level children have to use logic, memory and their hand-eye coordination to slide coloured shapes into the correct place. The initial puzzles are straightforward matching tasks but as children progress these gradually become more complex. Obstacles include mazes that have to be negotiated and bars that children are unable to cross. Some of the puzzles also require the use of multiple fingers to control and manipulate the shapes. It should be noted that the app developers recommend that users turn off the iPad’s multitasking gestures in the settings menu before playing, as these may disrupt game play.

Winky Think Logic Puzzles does not contain any adverts or in-app purchases. There is a link to other Spinlight Studio apps but this is protected behind a parental gate. Winky Think is an app that can be enjoyed by children from the age of six up. Younger children will enjoy the puzzles at the beginning and will be developing their fine motor control at the same time. Older children and even adults will find enough of a challenge in the later levels to keep them working on these puzzles for a sustained period of time.

Facebook @edappadvice
Educational App Advice has been set up by educational psychologist Peter Maxwell to assist parents and teachers find great apps to use with their children.
petermaxwell@mail.com

Follow Peter Maxwell
Contact Peter Maxwell
Embed code is for website/blog and not email. To embed your newsletter in a Mass Notification System, click HERE to see how or reach out to support@smore.com
close