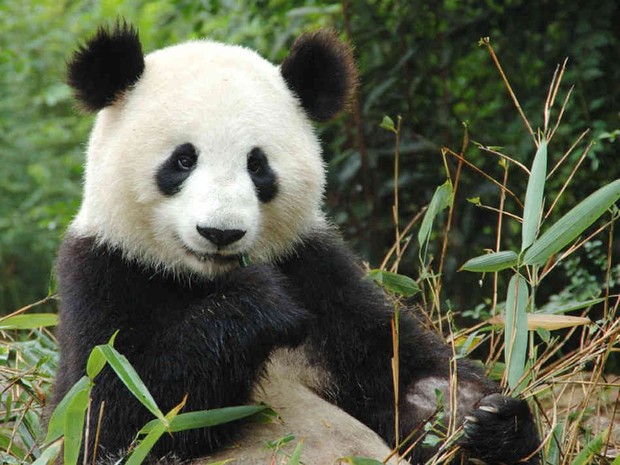 The giant panda is most easily recognizable by its black patches over its eyes, limbs, and around its back. Adults usually are around 1.2 to 1.8 m long and weighs around 100 to 115 lbs long. It has tough teeth and jaws to eat bamboo. Its paw has a five fingers and a thumb to help it hold bamboo. The thumb is actually a modified, enlarged thumb from the sesamoid bone. The bamboo that pandas eat contain very little nutrition and energy so pandas spend around 12 hours everyday eating and the rest of time sleeping or staying sedentary to conserve energy. Pandas do not hibernate and are usually solitary.

The panda lives in only a few mountain ranges in central China, where there are bamboo forests. This is mainly in the Sichuan, Shaanxi, and Gansu provinces of China. Giant pandas used to live in the lowlands, but there have been pushed to higher areas due to human settlement. Their thick, wooly fur helps keep the panda warm in the high, cooler regions. The bamboo forests usually have dense mists or torrential rains. 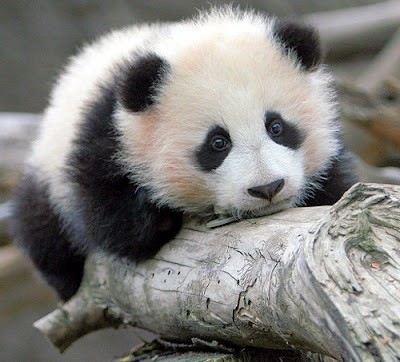 99% of a giant panda's diet consists of different types of bamboo. However, they can also eat small meat such as birds and rodents, and other grasses. Pandas are a primary consumer because they mainly eat plants. They do not have many predators but leopards are known to prey on young pandas.

Giant pandas and roundworms have a parasitic relationship. Roundworms are the cause of death of half of the pandas. Pandas receive this parasite by licking their paws after stepping through waste containing roundworm eggs.

The panda is considered a conservation reliant endangered specie. Their population relies on habitat management and predator and parasite control. In 1984, Giant Pandas were added to the endangered list by the Endangered Species Act.

Pandas have become endangered mainly because of habitat loss and their low birth rate. Human settlement on their territory, cutting down bamboo forests, and hunting for their fur have all been contributing factors to the population loss.

Pandas are on of the national symbols of China, and they are also the logo of WWF. Worldwide, pandas are a motivation to help save endangered animals because of their ability to draw people in and make them adore them. In the bamboo forests, pandas are also crucial for spreading seeds and promoting plant growth.