The majority of the information provided in this document is from the story titled SAN FRANCISCO EARTHQUAKE OF 1906 and can be found at the following website: awesomestories.com. This is an amazing resource for all kinds of informational texts and links to primary sources on a vast array of subjects.

What would we see if we could look inside the earth? Although no one has ever descended lower than the earth’s crust, scientists have a good idea how the planet’s interior is configured. [Click "inside" and use the kilometers conversion link below.]

The crust averages 3 - 24 miles in depth. On the crust’s surface, sedimentary rocks form a kind of thin veneer, but igneous rocks constitute the bulk (about 95%) of the total crust.

Because of the mantle’s temperature differences, its molten rock flows (just like thick soup which boils in a saucepan) with the consistency of asphalt.

Whatever is resting on the flowing molten rock will also move.

Review Question: So what is it that's resting on the flowing molten lava and therefore moving??? 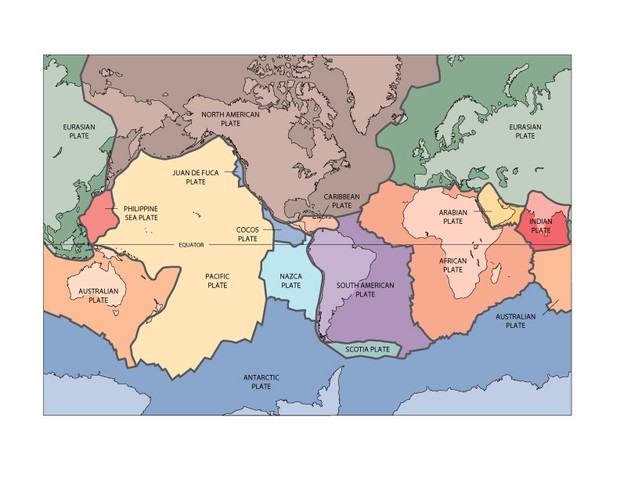 Answer: The earth's crust, which is broken into large plates.

Scientists now have a fairly good understanding of how the plates move and how such movements relate to earthquake activity. Most movement occurs along narrow zones between plates where the results of plate-tectonic forces are most evident.

There are four types of plate boundaries:

Take a look at the map below. This map shows the distribution of significant earthquakes around the globe that have been recorded since 1900. The size of the symbols represents the magnitude, ranging from 5 to 9.5 in magnitude scale. The focal depth is the depth below the surface of the earthquake event. Earthquakes with a focal depth close to the surface will usually cause more damage to people and infrastructure.

What observations can you make? 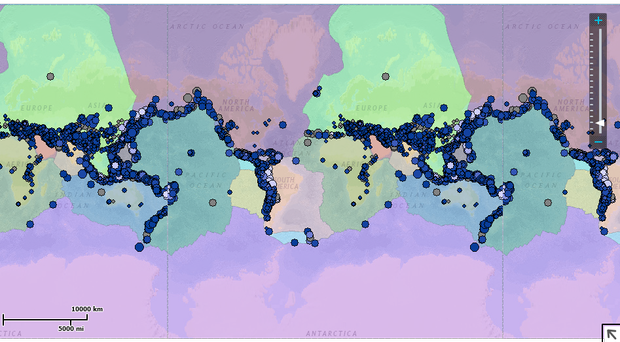 Because Earth’s tectonic plates rest on the mantle’s molten layer, those plates also move, although scientists do not exactly understand that process. Sometimes, when tectonic plates move, earthquakes occur or volcanoes erupt.

Scientists describe the deepest part of Earth - its core - as two separate sections. The outer core is a swirling liquid composed mostly of a nickel-iron alloy. Experts think the Earth’s magnetic field is controlled by this part of the core.

Earth’s solid inner core, made mostly of iron, spins independently from the rest of the planet and is about 4,000 miles below its crust. Scientists believe pressures at that level are about 45 million pounds per square inch. That is equivalent to 3 million times the air pressure at sea level.

How the earth’s core impacts the tectonic plates (which "float" on top of it) has a lot to do with natural occurrences like earthquakes.

How frequently do earthquakes actually occur?

Although earthquakes happen all the time, we only hear about the massive or damaging ones. But the USGS (United States Geological Survey) creates hourly maps which locate "felt quakes" in the USA and the entire world.

It’s surprising to realize how many earthquakes measured at least 5.0 on the Richter Scale during the past five years.

Why do earthquakes happen?

The process has everything to do with how the earth is constructed.

Earthquakes typically occur along a "fault line" which is, in essence, a fracture of the Earth’s crust. In the United States, the San Andreas Fault (located in Central California) is the most famous. It has been the source of California’s worst earthquakes including the Loma Prieta quake which disrupted the World Series in 1989.

Scientists believe the North American plate (where San Francisco is located) moves generally south while the Pacific plate (where Los Angeles is found) moves generally north. The San Andreas Fault is the boundary between these two plates. Earthquakes can occur along a "slip fault" (like the San Andreas) when tectonic plates "slide past" each other.

PREPARE TO SHOW ME WHAT YOU KNOW

SHOW ME WHAT YOU KNOW!

Click the link below for a Smore presentation about The San Francisco Earthquake of 1906.

The San Francisco Earthquake of 1906