Dutch Fork Elementary The Academy of Environmental Sciences, Title I

Below you will find information about our social action project. Your children have been inspired to take action on their learning from the Great Depression and the ways Americans were impacted by a failing economy. While the economy did become stable again, homelessness remained a reality for many and is still seen today. So, your children have decided it is not enough to acknowledge what it exists in the world...we have to use our knowledge to bring positive change. We have already begun collecting items, but hope to have many more in the upcoming weeks. Please ask your 5th grader about what this project means to us and to provide support in any ways possible.

Kayla and Miles speaking on their experiences with writing an awareness/argumentative piece and speaking to store managers to support our cause to 5th grade classes. 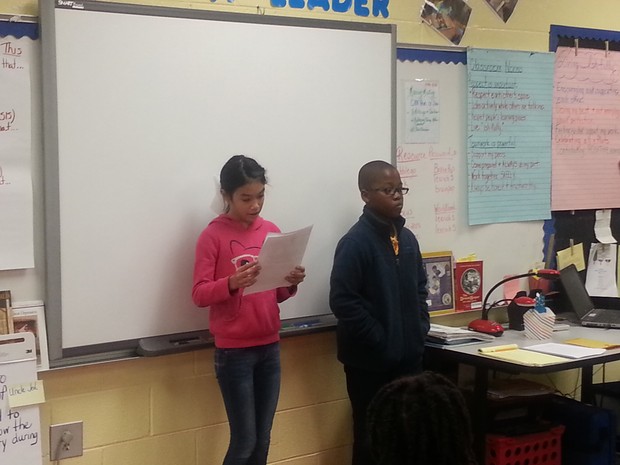 Our official letter to local businesses:

Dutch Fork Academy of Environmental Sciences 5th graders are seeking your assistance. At our school, we believe that our learning should lead to social action. Currently, we are in the midst of our Great Depression Unit of Study. Our historians are learning the impacts of a weak economy on American citizens of the past and noticing how economic status impacts an individual's condition of life in present day society. The students would like to take social action on their learning by putting together bag lunches for a food drive/pantry in need. Our students will be searching for an organization that would benefit from our services.

Now, this is where you become an essential part of our plan. We would be extremely grateful if you could provide any of the following nonperishable/canned/pre-packaged items in bulk:

We would also be happy to accept funds of any amount in order to assist us in purchasing these items.

Any or all of the items that you can donate to our cause would not only serve us, but also our immediate and neighboring community. If you are able to donate to 5th graders of Dutch Fork Elementary we will be able to provide a taxable write off receipt for the amount of your donations.

Attached, you will find a letter written by a Dutch Fork Elementary 5th grader explaining the importance of a community rallying together to end hunger and homelessness. We hope this letter urges you to take action in the same ways it has motivated us to see the struggles of fellow community members from a new perspective.

We appreciate your consideration and any support that can be provided. Your donation demonstrates what is possible for our young activists. In the future, should you need support with any projects, services, or fundraising please do not hesitate to contact us at Dutch Fork Elementary.

Source of Inspiration: Connecting Writing to our Lives

The Community Should Work Together to VANISH Homelessness

“For any of us the loss of a job,death of a spouse, or physical disability could be the route to total despair”, as stated by justgive.org. I strongly believe that the community should work together to VANISH homelessness.The community should work together because you wont have to be intimidated to donate,you don't have to worry about hitting them in the road and less people will die from hypothermia.

The first reason I strongly believe that the community should work together to vanish homelessness is because you won’t be intimidated to donate or feel bad if you can’t.If you don't donate and you have enough money to donate,you are just giving homeless people another reason to not have a job,home,fried chicken,etc.Based on information from a recent interview at DFES, current student Chrisi K. was at Sam’s Club on Harbison Boulevard in the parking lot when a homeless man that was wearing NO CLOTHES and ONLY a cardboard box approached Chrisi and her mother. This man said “I’ll put on clothes if you donate food!” Chrisi and her mom were frightened and drove off. Another story was told from student Kai W. Kai and her mom were at Little Caesars when a homeless teenager approached Kai and her mother and asked for 5$.Kai’s mom only had 5$ and spent it on their pizza. Later Kai felt bad for not having the extra 5$ to give the poor girl!The last interview thats going to be shared is Mrs.Drayton's experience. Mrs.Drayton was at the Exon on Harbison Boulevard and a man who appeared to be homeless was asking for money. Mrs.Drayton said “I’ll buy you food, but I don’t have any cash to give.” The man responded angrily with unnecessary language. If the community works together to raise money and food to send to shelters, the homeless people will not begging and we won’t feel guilty. Problem solved! But on the other hand homeless people can be really nice and can understand that you can’t donate.Some may be greatful for what they have.Homeless people aren’t always those scary,dirty, and nasty smelling people you’ve heard of.

The second reason I strongly believe that the community should work together to end homelessness is so you don’t have to worry about hitting them in the road.I have one story to share with you.Channel 12 news of Charlotte N,C shared a horrible tragity that had happened. A well known homeless man that went by “Chilly Willy” was killed on 3/5/15 by getting hit by a car while walking. The 58 year old man was hit in front of a bar on East Seventh Street.NO charges where filed on the man who had hit “Chilly Willy”.A few moments later the man who had just recently hit “Chilly Willy” called 911. This could have been avoided if there were less homeless because community was helping them. Have you ever been to a big city?Well I have every time I walk or drive in my car around some type of city I always see at least 4 homeless people when I go into town. Every time it breaks my little heart.Can you picture someone in your family being homeless and living on the streets and having to carry all of their belongings along with them on busy HighWays and streets?How would you react if one day you figured out that one of your loved ones had gotten hit by a car and couldn’t be with you and your family?Just think about it imagine all the things that the homeless people have been through.They could have children waiting for their parents to come home...they won’t return.Imagine how scared the kids would be if they where left and had figured out that their parent or guardian had been hit by a car and killed.What would the children do?The real question is what will the children do without their parent or guardian to guide them through life.If I had lost my mom I would have nothing left.I have experienced the death of a loved one and it feels like you have a hole in your heart.(My dad wasn’t homeless nor was he hit by a car.)Some people may say its the homeless person’s fault because 1.She/He shouldn’t have been in the road in the first place and 2.”Chilly Willy” was hit in front. of the bar right he could have been intoxicate.

The third reason I strongly believe the community should work together to end homelessness is because less people will die from hypothermia. According to dictionary.com, “Hypothermia:the condition of having an abnormally low body temperature, typically one that is dangerously low”. At one point the body will freeze then at one point die. About 700 homless people every year die from hypothermia.Life won’t be as sad.By sad I mean depressing and colorless….At one point your child or younger sibling will start to see the world differently and realize that horrible stuff that is happening in this world such as homeless people being homeless and dying from hyopthermia. Don’t you want to show them that they can help make a better world than we have now.Do you want YOUR child or younger sibling to see this differect?

Now after reading my argument, I hope you want homelessness to end as much as I do in order to do so you do all that you can. “BE the CHANGE you want to see in the WORLD”~Gandhi

Read the following tips to help out your community

~Understand the homeless: Despite the stereotypes,look at the reasons for homelessness

~Respect them as individuals: Give them equal respect you would to a friend or family member

For more info go to Justgive.org

Please share this message with anyone you think could provide us with the items that were mentioned. Thanks in advance!

Dear ALL student of DFES

Dear ALL students of DFES,

The 5th grade students will be participating in a donation campaign to stop homelessness .We were wondering if any of you guys are interested in helping the 5th grade students,with reaching their goal of making Irmo, SC a better place to live and raise a family. If you are willing to help, please consider the following steps to help donate goods such as care packages, canned food, shampoo, conditioner, clothes, toothbrushes, not used toothpaste, Etc. Especially bring in hygienic products.

Hope you decide to help,

P.S NO USED ITEMS except clothes

Letter to the Parents of DFES

The 5th grade students will be participating in a donation campaign to stop homelessness .We were wondering if any of you guys are interested in helping the 5th grade students,with reaching their goal of making Irmo, SC a better place to live and raise a family. If you are willing to help, please consider the following steps to help donate hygience goods such as care packages, shampoo, conditioner, clothes, toothbrushes, not used toothpaste, Etc. Especially bring in hygienic products. Next, you will have to bring the donations to the 5th grade hall.

Hope you decide to donate