Melany is using Smore newsletters to spread the word online.

Get email updates from Melany:

Did you know the kind of praise children receive from adults, such as parents and teachers, can have a powerful effect on their motivation to perform a challenging task?

How Do Our Praise and Feedback Impact Our Children's Mindsets?

First, let’s talk about the kinds of praise that do not work. Praising them for traits like being smart or a natural athlete doesn’t make for hard working kids. Why?

But what happens when that child comes across a difficult test, or challenging opponents? Which will eventually happen.

They might feel worse about themselves. Question why their talents aren’t getting them through this challenge. Blame external factors like a noisy testing room or difficult weather.

And they’ll steer clear of challenges that might question their “natural ability”. Now that child will always choose a test they know they can breeze through. They’ll avoid challenging ones that can make them learn more and work harder.

They’ll always choose the comfortable path to protect the smart and/or naturally athletic label they have come to rely on so much.

Teaching kids to try their best starts with praising the effort it took to reach their goals.

In order to foster the Growth Mindset, use something called "process praise" instead. Process praise is specific and directed at what the child did rather than who the child is. It sounds something like this:

"Great hits in your game today! I can tell that the work you put in during practice has really paid off!"

By praising this way, the child attributes his/her accomplishments to their effort. It motivates them to continue to refine their skills and persevere through challenges.

When children are praised for effort, it is likely they will learn a key life lesson earlier than many of us did: that most everything worth having in life is born of hard work.

How is it then that praising effort instead of innate traits works? Praising your child’s effort focuses on things your child can change. Success is possible because of effort, perseverance, and strategy. Not a natural talent she supposedly has.

With a Growth Mindset, people view hard work and effort as a key to success. We want to be sure that our children understand that having to work hard is not a sign of weakness, but is something that should be embraced! Having to work hard – whether on a math problem, shooting basketball hoops, or a new dance routine – helps children to make stronger neural connections and “grow” their brains!

Kids praised for effort will see a challenge as a good thing, not one to hide from for fear they’ll make mistakes. They know it’s exactly this kind of challenge that will help them grow even more. They will in turn, value the hard work it takes to improve and reach their goals.

Now that we can see what a huge difference praising our kids can make, what are the best ways to do so?

This might be a harsh tip, but watch how often you praise your kids. Sometimes we think our kids will stop studying or behaving well if we don’t praise them often enough or for every little thing.

But kids don’t need as much praise as we think they do. Save heartfelt praise for when it matters, not for doing something you expect them to be able to do.

2. Praise what it took to get there.

How do you know if you’re praising effort versus innate traits? Focus on the “before.”

A child won the game because she’d been practicing the whole week, not because she’s a natural at soccer. Or you could tell she loves drawing because she worked on her picture for several days.

Don’t just praise kids for the aftermath—the games won or the A’s on the tests. Instead, praise her for what it took to get her there. The perseverance to not give up when she stumbled on a jigsaw puzzle. The new strategy she found to dribble a soccer ball. The hours it took to get the train tracks put together just right.

These are the types of skills worthy of praise your child needs to hear. Focus on the things she can control, not on traits she can’t.

Let’s say your child was shooting basketball hoops. Do you only praise her when she makes a shot?

It’s easy to do this, and often natural. After all, the point of the game is to make shots into the basket. So when it happens, it warrants praise all around.

But don’t forget to praise for effort as well. Let’s say you notice she dribbled the ball before making a shot. Point that out, even if she didn’t get the ball in the hoop. Or let’s say she still can’t get any shots after so many tries—praise her for not giving up.

Wins and accomplishments are worthy of praise. But so are effort, strategy, perseverance and trying new things. When we praise children for pushing through the frustration, we help them recognize that sometimes tasks require us to put forth effort over a long period of time.

Embrace your child’s mistakes as learning tools. Mistakes are inevitable. Though disappointing, a mistake isn’t something to avoid at all costs.

Otherwise, kids shy away from challenges or don’t do good work. At worst, kids might resort to cheating or winning by any means necessary.

Instead, embrace mistakes as inevitable and educational. No one likes to fail. It doesn’t feel good to keep trying only to keep making mistakes and failures. But it’s part of the process and something to expect, not avoid.

When mistakes happen, point them out and see what they can learn from it. What might they do differently to avoid that mistake again? What did the mistake reveal that might help them reach their goal?

When a child’s hard work, effort, and increased skill are praised, improvement and accomplishment are always possible. 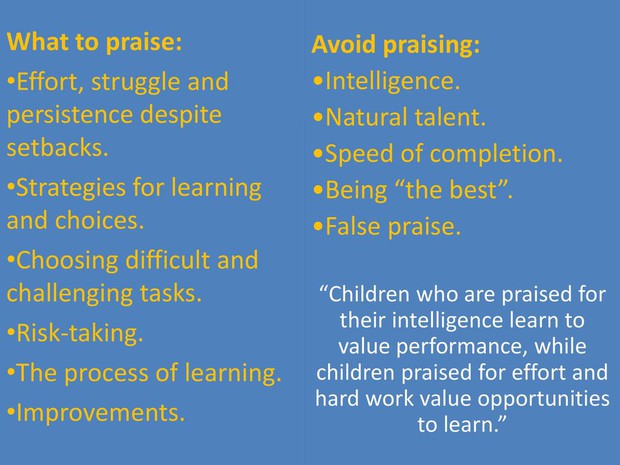 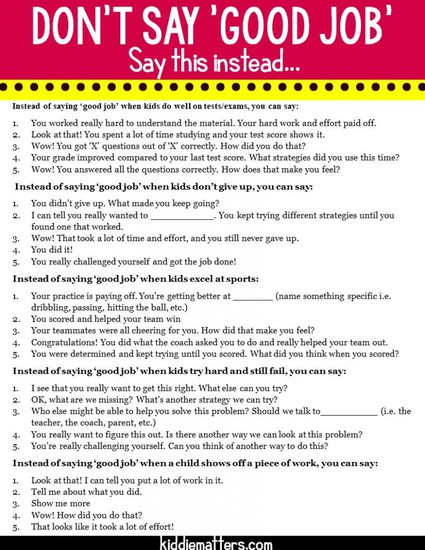 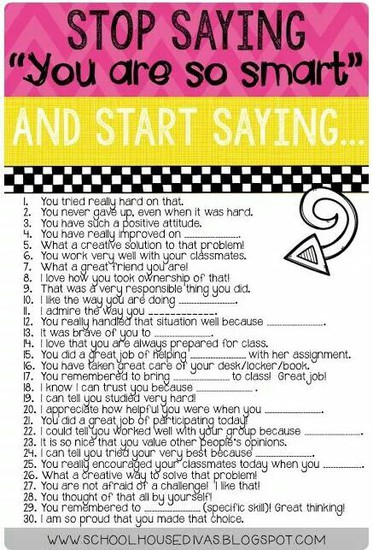