Imagine being lock up and misunderstood being forced to do tricks and being fed something your not used to thats whats its like for orcas in marine parks . There has only been one report of a orca harming a human. Because of stress involved in being deprived of everything important and natural to them, and fishing boats are making fish become deplete one thing less for them to eat, fish is the thing that they mostly eat. One reason why orcas belong in the wild when fights occur there's no where for them to go and that can cause deaths of orcas. Fights and the food they feed orcas ( dead fish) can cause sicknesses and injures can cause also cause deaths. 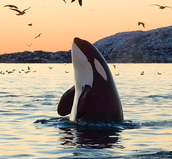 In the picture to the right the orca is spy hopping. Two baby orcas can weigh 1,500 pounds! One orca was found with a orca in its stomach. Orcas have 40 inter locking teeth. Their tail is what gives them speed no wander they can go up to 30 miles per hour.

Orcas have a wide verity of what they eat like minke whales, elephant seals, penguins, weddle seals, possibly squid, and mainly fish (like dolphins), sharks, sting rays, sea turtles, sea lions, walrus, even polar bears,sea birds, otters. they eat 3 to 4% of their body weight every day.

Females are pregnant for about 15 months. In the northern pacific ocean they mostly mate in the spring. Females are ready to start mating at 8 or 9 years old for females depending on where they live. Before they mate they will frolic with each other in a lively display of touching and teasing.

Deprived: suffering a severe and damaging lack of basic material and cutral benefits. Deplete: use up of the supplies or resources of

Emma: I think that orcas are killers because of Tekium killing its trainer

Tanner: I think that orcas are not killers because you don't here on the news that a orca killed a human

If you don't help them who will?